Though limited, Deshmukh is capable of rising to an occasion at times, as he has proved in a few of his earlier films. 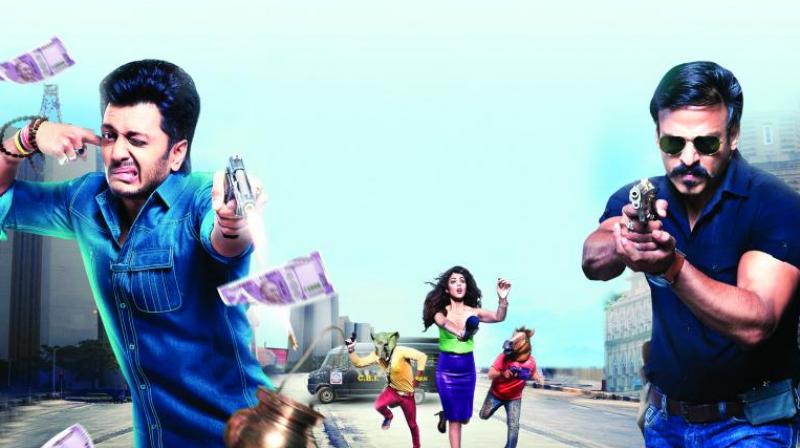 Bollywood needs to unlearn a few things. That is, before it begins to appreciate and learn a few others. For starters, will filmmakers quickly recognise that a film doesn’t have to be two hours long? Because if you cut 20 minutes off this Ritesh Deshmukh—Vivek Oberoi film, Bank Chor — supposedly titled to make teeny boppers jump with joy with its rhyming with a cuss word - this could have been a somewhat funny comedy.

But is this a comedy? I like movies that don’t settle into a groove, especially if the groove is already well worn. But the different kinds of movies that make up robbers and robbery are pretty worn too. And so, director Bumpy tries to blend comical situations, with elements of thrillers thrown in, to give us a confused mixed bag.

Bank Chor starts off as a quirky premise as a cop, a bank teller, a customer and even robbers are introduced in quick succession to, perhaps, suggest the unintentional involvement of them all in a heist, either as committers of the affected.

A comedic adventure that insists we imagine the characters as grown men, and small-time crooks, has one of the robbers Champak Chandrakant Chiplunkar (Riteish Deshmukh) as a vaastu believer, who - you guessed it right- would attempt a robbery as per his beliefs. Two of his accomplices from North India (persistently referred to as Delhiwallahs), Genda (Vikram Thapa) and Gulab (Bhuvan Arora) are equally inept at handling a high-octane crime. The trio has a grand plan soon that unravels rather clumsily, thrusting the guys on a wild journey with dangerous consequences...

Holding 28 people, including bank employees, security guards and customers, to ransom, Champak disguises as a sadhu and manages to walk past security with guns. If this reminds you of the casual and unprofessional approach of our safety measures in the country, there is enough reference to contemporary hi-tech jargon and systemic arrangements related to bank lockers to make you not feel cheated about our modern day banking system.

Champak keeps concocting stories to convince hostages about his middle-class background to make up for the treasure that has eluded him. But things get off-track quickly, causing them to cross paths with Amjad Khan (Vivek Oberoi), whose mustached look could pass off as an overzealous rookie partner. But he is a ruthless CBI officer who is supposed to do more talking through his gun. In the midst of all this, we soon realize that there is a larger plot unfolding as the home minister is seen pressing the panic button…

There is also the expected mad-media circus outside the bank led by crime reporter Gayatri Ganguly aka Gaga (Rhea Chakraborty) whose off-shoulder noodle-strap top and skirt would have viewers believe that reporters have nothing better to do than wear skimpy dresses to work.

With an ensemble bunch of crazy hostages — a high-strung housewife, a hyper chef, a possibly undercover cop, and rapper Baba Sehgal, there was ample scope not to derail its momentum with twists to forcibly add zing to all the action. The quirky premise generates some amusing moments, yet the patchy script can’t sustain its early momentum.

The only one who shines in this uneven nonsense is Sahil Vaid, playing a Faizabadi commoner, whose appearance as a hostage suggests that we are just one adventure away from finding the solid bits in-between the flabby comic set-pieces. But even his character-driven scenes become an annoyance in this low-budget comedy that’s overloaded with baloney ingredients like overstretched gags stuffed in between. The result never finds a consistent tone despite a scrappy chemistry between its leads.

Though limited, Deshmukh is capable of rising to an occasion at times, as he has proved in a few of his earlier films. Here, he makes his effort show, and all along behaves as if trying to suggest that there is something more on the anvil for us. Oberoi (seen after a long hiatus) makes full use of his presence.