The story revolves around a struggling street photographer. 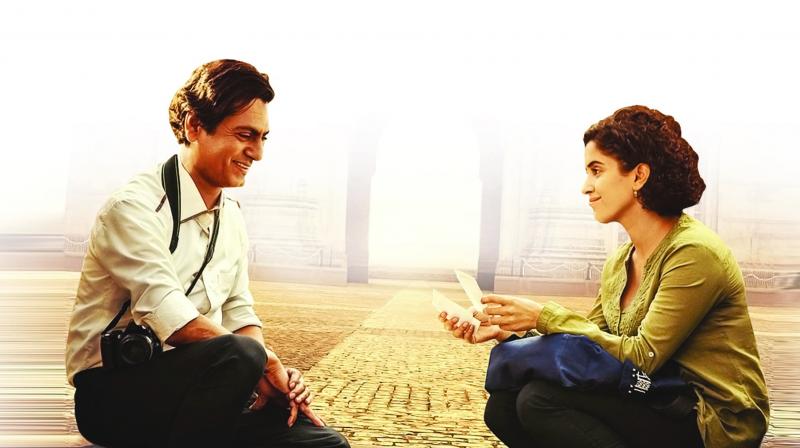 Siddiqui suits the role and gives it his best, though at times, one does feel he is holding himself back from coming into his own.
Rating:

Can two people who are diametrically opposite fall for each other? Of course they could. Even if the two seem to have nothing in common: their cultural upbringings, their surroundings and their religious beliefs. But there has to be something brewing between them for sure. What that “something” might be is perhaps the mysterious allure that enchants two people, and it’s difficult to recognise and identify.

After its world premiere at the 2019 Sundance Film Festival and the European premiere at the Berlin International Film Festival, Ritesh Batra’s Photograph releases in India, the UK, the US, Spain, France and Australia. That this coming-of-age romantic saga was much awaited would be understated ever since Batra’s directorial debut, The Lunchbox, made waves internationally and won the Rail d’Or (Grand Golden Rail) at Cannes as well as the Toronto Film Critics Association Award for Best First Feature Film in 2014, besides being the highest-grossing foreign film in North America, Europe and Australia for the year 2014 with over $25 million/Rs 180 crore.

In his fourth film, Photograph, Nawazuddin Siddiqui and Sanya Malhotra play the lead roles of Rafi and Miloni who meet accidentally at the Gateway of India where Rafi (Nawazuddin Siddiqui ) hovers around while trying hard to make a living as a street photographer. The story revolves around a struggling street photographer, Rafi (Nawazuddin Siddiqui) in Mumbai, whose meagre income is not enough to pay off an old family debt. An orphan, he has a set of close buddies to share his joys and sorrows with and has a grandmother (Farrukh Jaffar) whose wishes to see him married — a desire that she persists with and constantly pressurises him to find a suitable match.

On the other hand, there is Miloni (Sanya Malhotra) who is studying hard to complete her chartered accountancy exams, and is forever immersed in books, lectures and preparations. Once on an outing, at the crowded Gateway of India, she runs into Rafi, who convinces her to get herself clicked in an instant. As the hesitant Miloni dilly dallies, Rafi clicks her picture just when she hears her family calling her and she vanishes leaving poor Rafi quite disappointed.

But Miloni’s picture, which he has clicked, captivates his mind. And his heart too. He is floored by the innocence that Miloni exudes, and even starts dreaming of her though he neither knows her name nor her whereabouts. When his grandmother keeps pestering him to look for a girl, he sends her Miloni’s picture and introduces her as his fiancée. Soon, he is forced to track down Miloni, and makes her agree to pretend to be his fiancée too.

From then on, the stark contrasting backgrounds that the two characters come from fade as their differences which are not merely in their financial status, but also in their religion take a backseat and the two develop a fondness for each other. For Rafi, it is perhaps the beautiful looks of Miloni and her understated charm that enchants him, and for Miloni, it is his complete honesty and ordinariness that fascinate her. As the two form a unique bond, we also see the distinctions and differences that the city of Mumbai offers. Their remarkable and exceptional journey of togetherness is also possible — to a large extent — in a city like Mumbai where they do get noticed, but no one seems to bother about the differing attributes to their personalities.

The two-hour film has no physical romance that one is so used to seeing in films. The quiet and reserved love that blossoms between the two is that of comfort, and a deep understanding and trust. The relationship that develops gently, almost silently, is serene and the two don’t feel the need to rub it in. Ever.

Even the grandmother, the garrulous and affectionate woman who finds out about her grandson’s fiancée being a non-Muslim, is not perturbed but rather happy to have a girl in her grandson’s life.

Mohammed Rafi’s voice that plays in the background soothes the scenes more than it does to the characters who seem to be looking for something concrete to latch on to, to get going.

Batra’s Lunchbox was set to a fast lane and recounts with uncertainty the romance between a couple belonging to differing backgrounds. It’s slow pace is thoughtfully calculate, and should not let the viewer drift away from its basic premise — the monotonous sameness of some people’s lives and their constant yearning for something that must be a welcome relief that could lead to fulfilling their innermost desires.

Siddiqui suits the role and gives it his best, though at times, one does feel he is holding himself back from coming into his own. Malhotra is saddled with a role that looks a tad incomplete. As an educated and far more refined and urbane girl she does look like a perfect foil to his commonplace looks and behaviour; it is the unsure graph of her character’s growth in the film that never quite gives her any strength to sink her teeth into. What also looks forced, is the deliberate use of unspoken bonding between characters; be it romance, friendship of just sheer love. Doesn’t it require an irrational reason we may not be able to put a finger on?