How does one prove whether his/her love for someone is true or is there any such thing called 'true love'?. 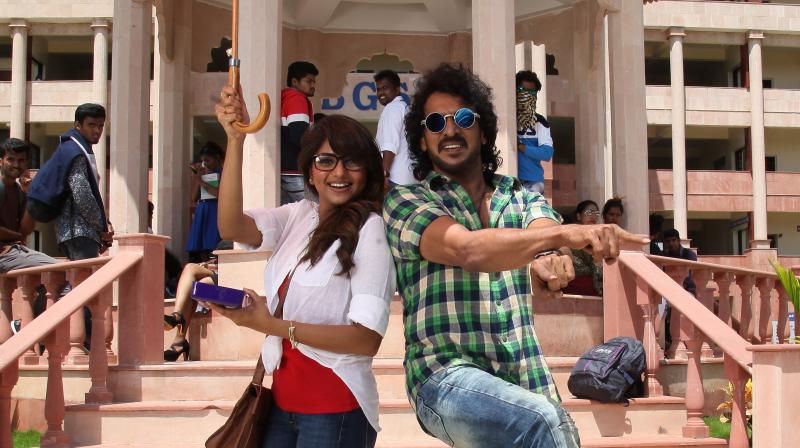 I Love You movie still.
Rating:

How does one prove whether his/her love for someone is true or is there any such thing called 'true love'?. Many simply claim that love itself is true, but how does one define love? Well, director R Chandru has joined hands with the director turned actor real star Upendra to answer such questions in two hours. The love he is talking about is between a man and a woman. In fact, it is Upendra who made similar attempts in the past through his films wherein he directed and acted showcasing love from his point of view. Here, it is the blend of such films but with a straight answer to 'real love' in the end.

The film focuses heavily upon two characters to serve the purpose of love. One is that of Santhosh played by Upendra and another is Dharmika, portrayed by Rachitha Ram. A series of flashbacks which are ten-year-old set in college days are the basic structure of this love saga.

The protagonist, who is married to an orthodox girl is a successful businessman. However, a decade ago, he lived a carefree life as a senior student with no identity or status. He would help students understand real love instead of wasting their time behind girls! This is when he encounters Dharmika who is working on her thesis about 'love'. She makes Santhosh as her main case study.

Apart from the story on love, there are no specifics which 'I Love You' throws light upon. Insofar as entertaining aspects found in a commercial movie such as comedy bits, a couple of fight sequences and beautifully choreographed numbers are fitted in between the lessons and arguments over love. Glimpses of R Chandru's 'Taj Mahal' and 'Charminar' which also goes back in time recollecting college life, is repeated here.

What works for Chandru in here is despite deriving inspiration from Upendra's unique explanation of love from his movies to refining his own version of love from his past movies and a similar Hollywood venture, 'I Love You' ends on a sensible and practical note unlike those which are left to viewers discretion. Upendra makes an impressive comeback as a real hero, performing in his signature style, but it is Rachitha Ram, who is seen doing more than what she is limited to in star-hero driven commercial movies. Yes, it can be watched along with family and friends too. It falls within the category of 'short and sensible love stories'.