For Swapna, the news of a serial killer on the prowl begins to weigh on her psyche. 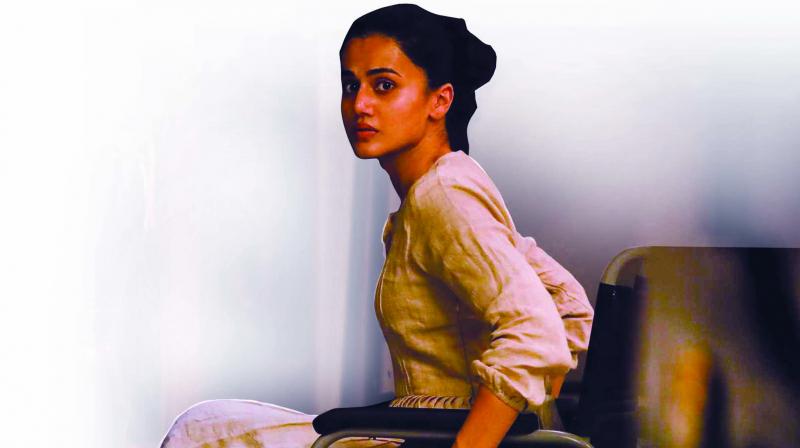 There are no motives added to let us know about the why and what of the ruthless killer and his gameplan.
Rating:

The story of a young girl living all alone in her apartment can be the perfect grist for the thriller or horror genres, and as a theme, Hollywood has either turned it on its head, or has at times messed it up with a mishmash of several ideas and styles. That there are immense possibilities to play around with in such a theme is something known to Indian filmmakers too, and several films based on a woman living or left alone in an apartment (Bhoot), or a pizza delivery boy’s mundane life taking a horrifying turn (Pizza) when he goes to a deserted house have been attempted before — with moderate or great success too!

In the Ashwin Saravanan directed Game Over (in Tamil and Telugu, and dubbed in Hindi), a thriller-in-the-making seems to get shortchanged by its sudden inclusion of horror.

But let me correct myself. I am not suggesting that the film doesn’t work at all. In fact, it does triumph as a less-attempted genre in which finishing a fine idea proved to be confusing for the filmmakers. Needless to add, in an attempt to add novelty, perhaps, both the genres remain unfulfilled, and unexplored.

For homebound Swapna (Taapsee Pannu), there is everything nearly perfect in her life: the right job — a plausible reason for a girl — she is a video game developer and works from home, a house-help — Kalamma (Vinodhini Vaidyanathan) — by her side, and what’s more? She lives in a swank bungalow with a security guard to protect her from danger, if any.

As the news of several young girls in Gurugram getting murdered sweeps the city, an eerie silence looms large over Swapna’s house as she turns nyctophobic, and has to fight her inner demons in the game called life. There’s also a reason for her fear. A year ago, on 31st December, she had been attacked brutally, and ever since then, her mind has enveloped her fears all the more even as her psychologist friend (Anish Kuruvilla) doesn’t find any reason for her to continue nursing her “anniversary reactions.”

For Swapna, the news of a serial killer on the prowl begins to weigh on her psyche. The killer, who beheads young women, also records the gruesome act on camera. From then on, she begins to battle her own anxieties, nightmares and phobias more like a clinging mist of evil bodement even when Kalamma, as a constant companion, does her best to allay her distress and apprehensions.

The film has the right atmospherics, and perfectly cast actors. But maybe the story of a tough but independent woman getting bogged down by life’s unexpected turns was turning out to be too linear, and so writer-director Saravanan and co-writer Kaavya Ramkumar bring in an element of the paranormal into the characters’ lives. A tattoo on her wrist begins to inexplicably cause her unbearable pain. On examination, she finds out about a cancer survivor, Amrutha (Sanchana Natarajan), who was also brutally murdered, and her remains being used as part of the ink that was added to the engraving on her hand. To add to her woes, she becomes wheelchair-bound after her two feet are in a cast, and she starts counting on her help even more.

There’s a lot that’s going on in Swapna’s life; but little is known about the killer on the run. There are no motives added to let us know about the why and what of the ruthless killer and his gameplan.

Pannu is very effective in her role and conveys her psychological and physical fearfulness with the right amount of emotion. Poor editing cuts, terrible dubbing in Hindi, a jarring background score and the tiresome recurring of stylised narrative with an overdose of an implicit assumption about a possibility in the sequence of events mar the otherwise engaging film that could have been a taut thriller.

Since thrillers are characterised by the moods they elicit, and give viewers heightened feelings of suspense, excitement, surprise, anticipation and anxiety from moment to moment, one would have been waiting beyond the 105-minutes of the film’s repetitive scenes to munch some more popcorn, had there been some more insights into the characters — or an extra twist in the end.

But imagine, with not much to chew on, even a less than two-hour-long film seemed never ending.