From the cast, Bharucha has nothing much to do, while Kapoor as the father is not his best. 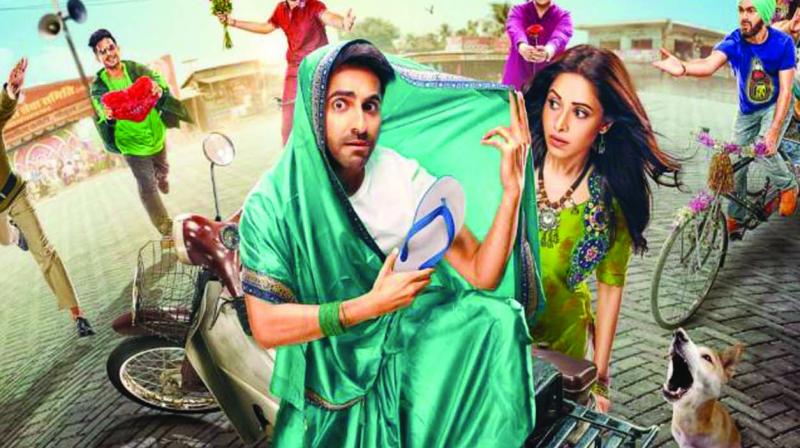 The last bit about loneliness in everyone’s lives sounds as unconvincing as a father falling head over heels for a voice that in reality happens to be his son’s.
Rating:

Ayushmann Khurrana is one actor who probably doesn’t believe in the conventional wisdom of playing the “hero” in films to ensure a longer run in Bollywood. Not that someone like him who has been picking up roles (Vicky Donor, Shubh Mangal Saavdhan, Badhaai Ho, Andhadhun) — that don’t make him everyone’s favourite — isn’t a popular actor. But by doing films where he plays characters that are not too regular or pleasing for the masses, he sure has carved out a niche definite for himself. And that trait in him is indisputably laudable.

In the Raaj Shaandilaya-directed Dream Girl, he inadvertently fits into a role in which he doesn’t even need the mandatory female lead opposite him — so interesting is his impersonation of Pooja, a call centre phone-sex girl. In this rom-com film, he plays a “dream girl” phone-sex operator who tries to win the hearts of lonesome and friendless men who crave for a “dream girl” in their lives.

Right from the time Karamveer Singh (Khurrana) was a child, he had an uncanny talent for mimicking women with perfection, so much so that he would ape his friend’s mother over the phone to allow his friend to escape punishment at home for his poor results in school. Later, what passes off as a prank turns into a standard job for him as he grows up to play the most covetous part of Seeta in mythologicals such as Ram Leela every year. The seasonal job is no good to keep his kitchen fire burning though. When he begins to hate the monotony of his irregular job, and chucks his job, he begins to get desperate, more because of his father’s (Annu Kapoor) constant reprimands that invariably remind him of the loan that the family has to repay. Soon, he accepts a job offer where he has to pretend to be “Pooja” and sweet talk his way into the hearts and minds of lonely men at the seedy call centre during the nights — all for a fat salary.

For the Mathura-born Karam, his special skill earns him instant fame as the sensual-voiced female who provides emotional relief in many lonely hearts. His creative and imaginative mind also comes up with nuanced witticisms that make him the most-in-demand employee of his office. But, barring his childhood friend Smiley (Manjot Singh), no one seems to know his true identity, not even his father.

With such a theme as the mainstay of a 133-minute film, there is a slim premise that could either turn into slapstick David Dhawan-esque comedy, or could give us more. That it allows itself to stay afloat in the former is reflective of its poor writing credited to Nirmaan D. Singh, Niket Pandey, and Shaandilya himself. Several men — a rich teenaged spoilt brat; Karam’s widower father; Karam’s love interest Dolly’s (Bharucha) brother Mahender (Abhishek Banerjee); a bored cop looking for excitement in his life (Vijay Raaz) — are some of the characters for whom Karam as “Pooja” begins to deliver the much-needed respite with the promise of complete liberation someday. In the midst of drama that gives us a few stale laughs and a few interesting character sketches, there is also a half-hearted attempt to thrust us with a romantic angle between Karam and Dolly, just so that we also get the impression that our “hero” has a straight side too. And, so the obligatory sequence of a girl (Bharucha) appearing rather unsure
and hesitant needlessly derails the fun that some of us would have had throughout.

There is an attention-grabbing subplot that ought to have been explored deeper, as Pooja gives sleepless nights to none other than Karam’s father, Kapoor, who also gets fascinated with the idea of a sexy voice bringing in a ray of hope for his grey-haired and over-the-hill libido. What could have been a hilarious scene in the funny trope of a father getting trapped into such a situation could have been salvaged by excellent writing. Instead, the script lets us down as Karam makes silly attempts at making Pooja a conservative Muslim girl Zubeida in a burkha. Even as Karam — fearing an ugly revelation of his truth — fails to convince his father about the futility of an inter-faith liaison between them. The father vows to transform himself as an Urdu spouting hennaed suitor (though a stereotyped representation of an onscreen Islamic character) and almost converts himself to embrace a new life — both as a passionate sweetheart and almost an apostate — the poorly written script lets it slip into more farcical and thoughtlessly frivolous and more humourless comic adventure.

In yet another scene, Karam’s fiancée Dolly’s brother Mahender getting besotted with Pooja could have been handled better.

Khurrana’s nonconformist role may not be revolutionary, but is in the same league as many of his earlier film roles have been: that of a sperm donor, or of a man facing erectile dysfunction, for instance, which overturned and negated the bindings that every film hero must have. He owns his character, and infuses it with the right amount of flourish, energy and confidence, and sees to it that he never plays to the gallery, despite Shaandilya’s film narrowly escaping that route where it would have effortlessly turned towards the sleazy zone.

From the cast, Bharucha has nothing much to do, while Kapoor as the father is not his best. Perhaps, his hangover of the earlier role in Vicky Donor looms large in his life, and he believes he can get away with lesser effort this time. No such luck for him, though.

As a film that had a one-line theme, it shouldn’t have been too much of an effort to hire a good writer to animate it with a new twist, or tongue-in-cheek humour, instead of cramming the comedy with stale jokes. Or just allow it to remain plain mindless and juvenile. The last bit about loneliness in everyone’s lives sounds as unconvincing as a father falling head over heels for a voice that in reality happens to be his son’s.

Still, to be fair, the film’s very idea —though gets lost midstream —overthrows and undermines all the conformism to the traditional attributes of a hero as de rigueur, and that alone must be welcomed!