There are places where one would get the same sense of mockery ridicule and daring that Verma gave us in his first film. 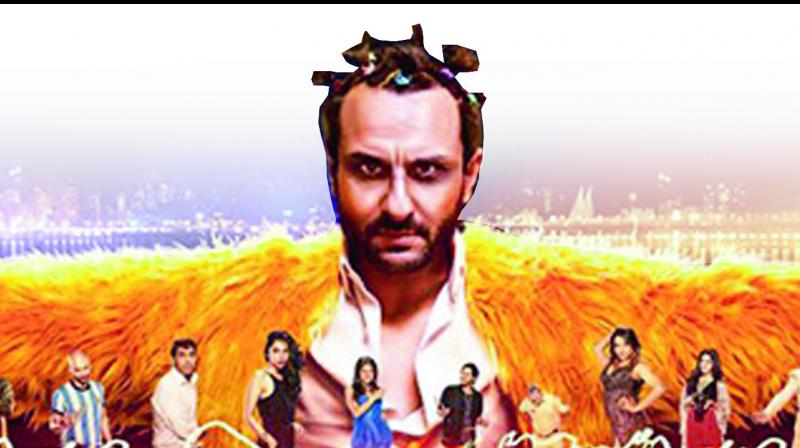 What would you expect from a man who never smoked, never drank and did drugs way too long back to remember? For rubbing it in, he even tells his doctor that he doesn’t even like butter. As an appendage, he wryly tells him: “I am a good guy doctor!” He may be all of a nice guy, but, who knows, the powerful almighty has a different plan for him. Well his physician has just diagnosed him with stomach cancer, a reality he cannot come to terms with.

Akshat Verma, who gave us our, perhaps, first whacky irreverent dark comedy Delhi Belly in 2011, is back with yet another film, Kaalakaandi, which loosely translates into “things going disastrously wrong”, or “someone who does only wrong things”.

This dark comedy about life, death and karma, has in its opening scene, Rileen (Saif Ali Khan) trying to digest what doctor has just announced — he has, may be, three or six months to live. Seething with rage inside, he is unable to handle it and drives straight to his brother Angad’s (Akshay Oberoi) wedding, where family, friends and relatives are busy preparing for the big celebratory occasion in the evening. On his insistence, his friend gives him a drug (LSD) that shoots him off the radar, and off he goes in search of some dirty deeds to justify his “existence”, and the subsequent “disaster” of a catastrophic end to his life.

There are four stories woven together here: a young girl (Sobhita Dhulipala) is packing her bags to leave for the US for her doctorate even as her boyfriend (Kunaal Roy Kapoor) insists that they get married first; two petty gangsters, Deepak Dobriyal and Vijay Raaz who are sick of taking orders from senior leaders of their gang and never making a killing; a young guy, Akshay not being sure of being the right choice for the girl he is about to marry; and the “good guy” (Saif) who wants to live it up. May be one last time!

Things go terribly wrong for all of them — Sobhita is forced to attend a party just before her departure; the two small-time thugs decide to hatch a plan that could make or break them; Akshay decides to have a one-night stand with his one-time foreign girlfriend, and hurts himself badly; the after effects of LSD throw his head reeling under hallucinations. And one could imagine what all could possibly be the course of action thereafter. He is curious and even tries his luck with a transvestite (Nyari Singh).

There are places where one would get the same sense of mockery ridicule and daring that Verma gave us in his first film. There are some fun moments, but not too many, and not all the way. Though the quirky plot begins on a serious note and although the seriousness to the trope adds a bit of buoyancy to the narrative, but the overall mess that it lands into is not competently handled by scriptwriters Akshat Verma and Devesh Kapoor.

Saif loves the urban and urbane characters he plays; in many of his earlier films, wherever he plays the suave and polished, he has scored. Here too, the best lines are reserved for him, and he makes the most of it.

Mumbai’s dark alleys reflect what all could one expect in those dark moments where the incessant rains could wreak havoc. The four stories never intertwine but don’t have much to offer on their own.

The supporting cast has some interesting faces, Dobriyal and Raaz, Dhulipala and Amyra Dastur who are not props but suffer from unskilled writing. Verma could have gone the whole hog like he did in his first film. After starting with a bang, he seems unsure of how to be a finisher!