Kharbanda looks pretty but the latter half has her faltering under the complexities of such a demanding role she plays. 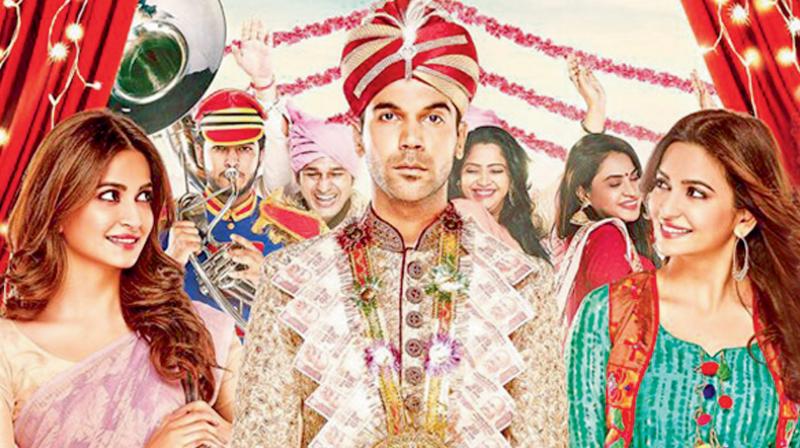 Can a new marriage survive meddling or disapproving in-laws, and some of their worst diktats in India? If a small-town girl discovers that she has her dream come true that entails a high-profile career, that too on her wedding day, would she then choose to set it aside, and marry her love? Or flee? You read it right — run away from home even as her dulha and his baraat are just about to arrive at her doorstep?

This is the question posed in this romantic drama. In Ratnaa Sinha’s debut as director Shaadi Mein Zaroor Aana small town families and their concerns arising out of insular lives form the crux of the 137-minute film, which amuses you in bits and makes you squirm and livid with rage in equal measure as you get past with the film dealing with issues like faulty accent, outdated views, redundant societal pressures and dyed-in-the-wool ignorant parents to name a few. And so, you find the young settling for arranged marriages; young girls asking their fathers for permission to study; girls not being allowed to take up a job as per their parents’ commands, etc, running through the lives of the locals as a common thread.

When a clerk in the excise department of Kanpur, Satyendra Mishra or Sattu, as he is fondly called (Rajkummar Rao), gets a proposal from the Shuklas (Govind Namdeo and Navni Parihar), whose eligible, pretty daughter Arti (Kriti Kharbanda) is a university topper, his joy knows no bounds. Soon the two, after a brief chat at a restaurant, are charmed by each other’s affable manners and decide to settle for matrimony, after he makes it clear that he approves of women continuing to work after marriage, and Arti too takes to him instantaneously.

Together they seem to live their dream as the two sets of parents get embroiled in negotiations that centre round the limit for dowry concessions. While Mishras demand `25 lakhs, the Shuklas plead they could cough up only `15 lakhs as per their limited means. Not willing to let go of a decent boy like Satyendra, Arti’s father agrees to pay the demanded sum.

The two families set out to make wedding arrangements and all seems fine until the day of wedding when an unexpected chain of events turns their lives upside down — unbeknownst to anyone in the family, Arti clears Provincial Civil Services with flying colours even as her sister Abha (Nayani Dixit) finds out the bitter truth that the Mishras would never ever “permit” their daughter-in-law to step out of the four walls of their home and work. What are the options left for her? Take the plunge, tie the knot with the man she adores and settle for a domesticated housewife’s role — just the way her sister Abha has all these years? Or get into a full-time career? Egged on by Abha, who wouldn’t allow her to waste her talent, Arti works out a dreadful compromise and does the impossible — she runs away from home.

On discovery of her missing, what ensues is a horrifyingly appalling drama between the two families, and a shattered Sattu running amok to discover the truth from Arti, who is incommunicado.

Not getting enough explanation or justification of her sudden impetuous decision, he is not the one to drown himself in misery and is rather unsparing in his reasoning as Arti becomes an officer and he too rises to the level of an officer. Thereafter, the primary pleasure of such a story should have been the vicarious thrill of experiencing the mutual, inevitable attraction and an equivalently abhorrence between the leads.

To be fair, the first 30 minutes or so of the film are enjoyable with the middle-class feel, breezy dialogues and competent acting that each character brings in to their respective roles. From then on, it crams the storyline with as many spiralling developments as its running time allows. Whether it’s the regressive way that the people in an otherwise industrially rich Kanpur behave or the ancient customs that these towns are burdened with to myriad twists that the second half offers, you wait for some soundness of reason to steer the proceedings.

Rao, who is always a treat to watch, transforms from the self-consciously uncomfortable person who finds it difficult to pronounce the word, “awkward” correctly, to someone who is all out to avenge. He does his best, even the premise of the movie sounds like the flimsiest of contrivances. That may not be surprising but as an officer his sudden clever quips are in abundance and never in short supply. Many in the audience could also get the impression that administrative jobs are all about exercising power rampantly; or that it’s not so much of a task to appear for the civil services exam and look authoritative supremacy and muscle power almost promptly. Kharbanda looks pretty but the latter half has her faltering under the complexities of such a demanding role she plays. Had it not been for the good supporting cast comprising sister Nayani Dixit, Namdeo, Alka Amin, or Vipin Sharma, the narrow territorial mindset of Kanpur would have looked forced unspontaneous. Particularly Dixit steals some of the scenes with her natural flair for comedy and perfect ease before the camera in mouthing some funnily saucy and flippant lines.