Tikli and Laxmi Bomb movie review: Gritty, stark and speaks the language of the streets

The film’s joyous moments also come from the fact that all the other girls are nicely characterised, and assigned to a talented lot. 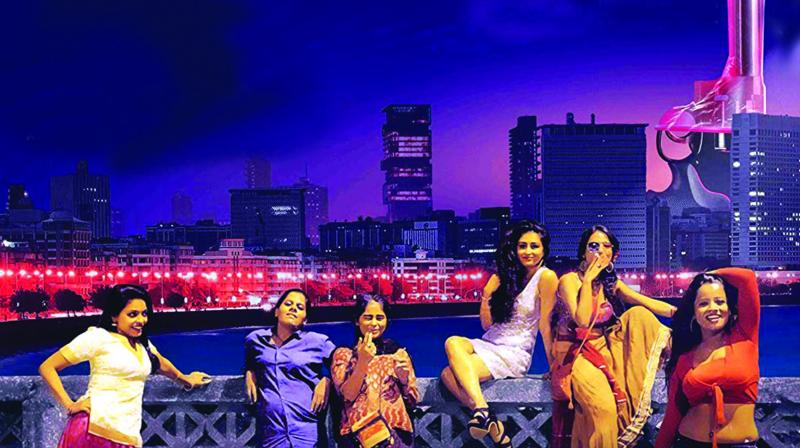 Still from the movie Tikli and Laxmi Bomb
Rating:

Mujhe sannata pasand hai,” says Laxmi (Vibhawari Deshpande), trying to erect a sound-proof fence around her personal space after she is forced to take in Putul (Chitrangada Chakraborty) under her wing and into her small kholi. Despite the strong stench of chameli and sarson ka tel that wafts off the new girl’s head, Laxmi can’t say no because it’s her pimp Mhatre’s (Upendra Limaye) command.

“Mujhe company pasand hai,” replies Putul in her quintessential endearing way as she makes her home on the mattress on the floor, setting out her booze bottle and namkeen packet, offering both to Laxmi.

At night too Laxmi crunches up her nose while Putul sleeps, oblivious to the deadly farts she’s emitting.

But soon, despite her best efforts, Laxmi starts liking Putul crashing into her sannata, smiling and letting out a fart herself. She also likes having someone to be irritated with.

Writer-director Aditya Kriplani’s Tikli & Laxmi Bomb is a film about sex workers and he tells their story through these two women who inhabit the same world, but negotiate it with a contrasting mindset and attitude.

Even in their looks they stand a world apart.

Tikli does her damnedest to scream out her presence. She wears shimmering tops, shredded jeans, high heels. She leaves her hair open and abuses someone, anyone, who crosses her.

The red colour she wears is the colour of kranti, she says.

Laxmi and Putul operate from a deserted patch of a footpath, along with Manda (Suchitra Pillai), Tsamchoe (Kritika Pande), Sharanya (Divya Unny) and others, smoking, sipping tea and listening to Mangatram chaiwalla’s (Saharsh Kumar Shukla) gossip.

The film’s story encases, at once, patriarchy’s deepest desire as well as its uncontrollable fear of women having a right over their own bodies.

It shows men’s urgent, existential need to control and profit from these women, but also to, simultaneously, demean, abuse, kick around, exploit and, of course, rape them.

Tikli & Laxmi Bomb doesn’t flinch even once in presenting a gritty, stark, dark ecosystem in which these women operate. It happily speaks the language of the streets, of a dhanda where there’s a price on women’s bodies that belongs to men.

Mhatre collects money and gives hafta to the cops and Corporator Shinde (Kamil Shaikh). He’s also struck a deal with a hotel nearby which rents rooms by the hour. AT, the auto driver (Mayur More), is supposed to rush to the girls’ rescue if they give him a distress call.

She teaches Putul how to make sex noises, and tells her to check the backseat of a car before getting in. Because “Mard ki duniya mein apni safety, apni zimmedari”.

Though cops are paid, they routinely round up the girls and rape them in police stations while charging them for soliciting.

Laxmi, having been wrung, repeatedly, by the cops, Mhatre’s men, Shinde, is perpetually in a state of meek submission.

Putul insists on dignity. My body, my rules, she says and stands clutching a sharp, long knife.

She thrashes AT, pulls a knife on a customer, on Mhatre and abuses a cop.

Word gets around. Customers start behaving themselves.

Slowly, gently Putul goads Laxmi about creating “apna system”. She comes up with ideas, of how to cut out the middle man, pay the cops directly, have their own security system, how to get more girls, more clients.

There’s real joy in the film when the women are pooling their wits, strength and guts to create something that is theirs.

Tikli & Laxmi Bomb has a gaze that’s neither lewd nor judgmental. Nor is it cloyingly charitable. It’s just humane. Without actually showing much — there are no pornographic fantasies — the film manages to convey how criminal and pitiable patriarchy’s attempts to exert control are. It also tells how viciously it reacts when challenged.

But even the film’s last scene, which is deeply distressing, seems to say, it’s worth dying, trying.

Aditya Kriplani’s film doesn’t delve too much into how or why these women got here. Instead it focuses on the everydayness of their lives and work, thus going beyond the prohibitive veil, and allowing us to see not just the insecurities of the women, their loneliness and hazards, but also the women themselves.

Without painting them as victims or becharis, it simply shows them as workers negotiating the sliver of space the world has given them to operate in. A space that can never belong to them.

The film, shot mostly at night, has nice chases, some stunning, shocking scenes, and a cool background score. But it also has some strange, almost extraneous, pretentious moments when Laxmi suddenly decides to foster a relationship with Mumbai, the city, by singing the same ode to it thrice.

The screenplay doesn’t really give Mumbai a role to play, and the story, though set in Mumbai, is not exclusive to it. These heavy-breathing, philosophical moments could have been deleted to take the film tighter.

Yet it is Vibhawari Deshpande’s Laxmi who grounds the film — gives it a residence and a kind of weary, depressed soul. And that creates the right space for Chitrangada Chakraborty’s Tikli to brighten up with with a string of lights and her banter.

Vibhawari and Chitrangada are both cast very well and are brilliant.

The film’s joyous moments also come from the fact that all the other girls are nicely characterised, and assigned to a talented lot.

Each one is distinct in appearance, choice of accessories, and they stay with you. Kritika Pande (Tsamchoe), and Divya Unny (Sharanya Nair) were especially good.

Kamil Shaikh, who plays Shinde will always remain scarily creepy for me.

Watch Tikli & Laxmi Bomb. It will shift something inside you.