Since Shroff is fit and muscular, he has to exhibit what he does best — dance, fight and show off his body in kabaddi-acrobatics. 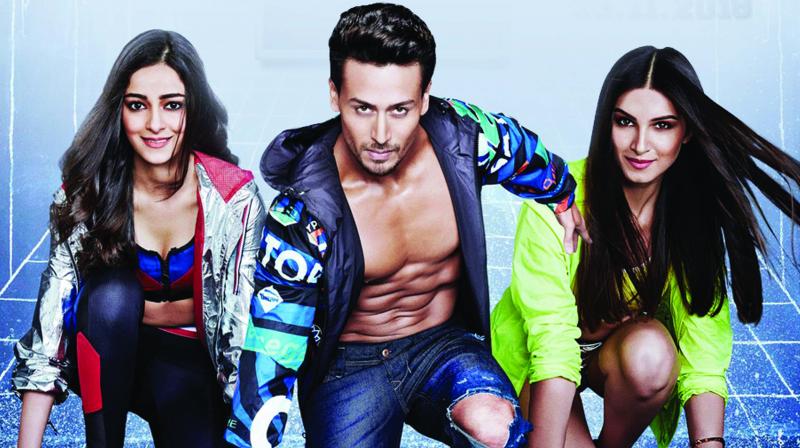 A Still from Student Of The Year 2
Rating:

One of the biggest franchises of Bollywood returns with Student of The Year 2, and is once again set in one of India’s premier academic institutions — St Teresa’s in Mussoorie, where academics don’t play much of a role for the benefit of the students.

Despite a good seven-year jump, the film’s hackneyed tale doesn’t move beyond predictability. And so, the sequel is by no means a well-paced yarn; nor can it boast of pleasing performances from a perky cast.

To be fair, though not a super-duper saga of romance, the prequel Student of the Year released in 2012 wasn’t entirely bereft of pleasantries and surprises. Besides a bubbly Alia Bhatt, it had a bunch of alumni reminisce about their final year at St Teresa’s college and the events that shaped their lives — and kept us engaged.

Needless to add, SOTY 2 too centres round the familiar territory of friendship, sportsmanship, love, companionship et al, but falls several notches below our expectations, even if it tries hard to include the obligatory teen audience in mind, and leads us to a rehashed tale of Jo Jeeta Wohi Sikandar.

Many of us who grew up at a time when reading books held sway would recall how it was fun all the way to hold an Archie comic book, and devour it within minutes of grabbing it. Producer-director Karan Johar made good use of our — and possibly his own too — experiences when he made Kuch Kuch Hota Hai more than 20 years ago, and helped many of us revisit the Riverdale fantasy with nostalgia. Soon many other films — mostly from the YashRaj Films banner — followed a similar trope in films such as Dil Toh Pagal Hai, Mujhse Dosti Karoge, Aaina and Cocktail to name a few. Two decades later, Punit Malhotra directs SOTY 2, and repeats the surefire formulae to a successful masterstroke — teen love and romance. Sadly, it doesn’t work and leaves us wondering if great production values (Ravi Chandran is the DOP) alone could salvage an irredeemable time of 146 minutes where every scene is crammed with emotion that one has seen umpteen times in Hindi films, and has thus almost memorised them by heart.

What works then? If at all, anything? Thankfully, though there isn’t any realness to these characters, this isn’t a full-fledged dance musical, nor a bitchy soap opera with everyone scheming against everyone else.

Our story begins with Rohan (Tiger Shroff) trying hard to enrol into St Teresa’s from a rather downmarket Pishorimal Chamanlal College only because he wants to be with his childhood girlfriend Mridula aka Mia (Tara Sutaria). As luck would have it, he sets his eyes on a student Shreya (Ananya Pandey), who along with her brother Abhi (Aditya Seal) are students getting away with braggadocio. Of course, Abhi is supremely gifted and has been the winner of the Student of the Year trophy consecutively for two years. With two curvy sexily clad young girls at the centre of the story, there had to be a love triangle to move forward, and both Mia and Shreya vie for Rohan’s attention.

The film then focuses on the boys and girls of St Teresa’s who, as one would have guessed by now, have nothing to do with books or classroom lectures, and flaunt their perfectly chiselled bodies in designer outfits. That’s when they are not taking part in dance competitions or contesting to win the most coveted Student of the Year trophy in which three competitions take place and the student with the highest score at the end of all competitions emerges as the winner.

There seems to be a twist here — there is more of kabaddi and less of any other form of sport. And that’s not all. There’s confusion running at the head of the hero — Rohan oscillates between sticking to his love for Mia on the one hand, and on the other, making him indecisive over whether it is Shreya that his heart beats for. Now that’s a predicament Archie could never solve even as we saw how Veronica pined for him, and Betty too manipulated him at every step. But I wonder if any of the teens who, by the way, were not exactly thronging the theatres in the morning, could have known the dilemma that Rohan faces is akin to what we have all grown up reading about — Archie’s flirtatious two-timing that lead to a his own Catch 22 situations!

Since Shroff is fit and muscular, he has to exhibit what he does best — dance, fight and show off his body in kabaddi-acrobatics. Aditya Seal doesn’t exactly have great presence and despite being decent looking, shows some promise — but only in a few scenes. Of the two debutant female actresses, Pandey is given a better character that gives us a glimpse of several shades — love, anger, jealousy. Between her self-sacrificing role and Sutaria’s “I-am-Rohan’s-first-love” assured stance, Shroff shillyshallies, and keeps us guessing who it is he wants to grow old with. It seems he desperately needed to shed his action-hero image and enter the dharma camp to try his hand at romance too. He has a long way to go to play one of Bollywood’s best-known banners’ universal charmers, Rohit or Rahul, whom every girl in the audience falls for.

Considering all the hype surrounding it, the film will leave many movie buffs underserved, and might make them feel a little iced out. Even if it’s a fantasy film, many youngsters will be left baffled at the untroubled, too easygoing and insouciant life of a boarder. Myths will be shattered for all those who dream of staying away from home in far-out rich private schools with lodging. In addition to the unreal world that it creates, and the foreseeable screenplay the film produces, its overstretched length is another of the most disappointing features!