Behen Hogi Tere movie review: Watch it for Rajkummar, if you must

The intentional comedy in the film always seems on the verge of working, but then, is quickly bludgeoned to death with staleness. 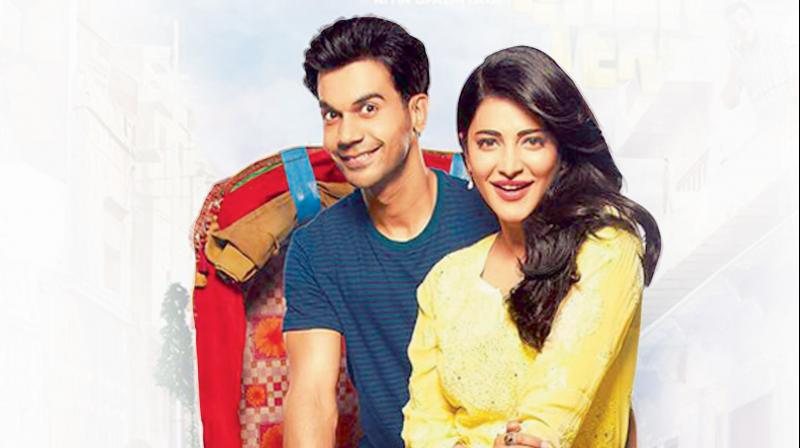 A still from the movie Behen Hogi Tere
Rating:

Middle-class romance as the key subject has eternally been the great choice for filmmakers who always try to look for newer stories to fill their backdrops with. But call it their lack of imagination or their inherent fear of looking for anything substantially different, all one gets is a mish-mash of stale and lacklustre fare.

The middle class, anyway, is a much-layered variety that has several ranks coming under one category and has a multitude of diametrically divided views belonging to different regions. Director Ajay K. Pannalal seems to have half intelligently recreated the working class atmospherics losing the plot midway with few laughs and errors in 128 minutes.

Behen Hogi Teri has Gattu (Rajkummar Rao) and Binny (Shruti Haasan) living across each other in a narrow lane that reflects the thin and confined mindsets that seem to occupy inhabitants of the residential colony. When Gattu discovers his love for Binny, he tries every trick in the book to impress her albeit rather modestly. A lovelorn Gattu is jobless and is dependent on his father and sees no hope for himself. He is also incorrigibly a loser. As Binny’s grandmother kicks the bucket, good fortune knocks on his door when he is made to visit his neighbour’s home more and more frequently. Naturally, he leaves no stone unturned to make sure Binny falls for him too. A tough nut to crack, Binny declares that to win over her love, he needs to prove that he has guts and is not a wimp. Every time Gattu does get an opportunity to confess his love for her, he has to chicken out for lack of any vital nerve. To make matters worse, all his hopes crumble when both his father (Darshan Jariwala) and his patriarchal elder brother, (Ninad Kamat) believe he is more like a brother to Binny, and even assign him the job of looking after her, if need be. There is a misunderstanding too that arises out of Binny riding pillion on his best friend Herry Tengri’s motorcycle that leads to further complications between the two families. Does he accomplish his mission? With Gattu being so unadventurously coward and so much at stake, it seems unlikely.

The intentional comedy in the film always seems on the verge of working, but then, is quickly bludgeoned to death with staleness. What also doesn’t work is the writer’s inability to comprehend the complexities behind North Indian middle class families where romance between a young boy and a girl may not be encouraged by the still somewhat conservative middle of the social hierarchy parents but surely Lucknow has far more accepting and ordinary among ordinary but educated families. This could have been a disarming comedy with the help of roguish old Ranjeet and Gulshan Grover as Herry Tengri’s uncle and father, who would do anything to bring back their family honour and disrepute it could have a lot of fun too. The romantic rendezvous on the terrace for the two lovers should have led to far more interesting nuggets too.

Crisp dialogues, witty one-liners, funny twists are not only desirable but are a must to keep our viewers engaged in a story that is solely dependent on plots and not any particular theme or incident. Rajkummar Rao does his best to not just look the part he plays but also enact his role perfectly. Filmmakers like Basu Chatterjee and Hrishikesh Mukherjee in the past and even Dibakar Banerjee in the recent past have understood the genre of the middle class comedy so well that we keep revisiting their films even today. The trouble is this is neither a satire nor a dark comedy. It doesn’t even have great performances to keep your interest alive throughout. By adding many stereotypes, it hammers its point. The end result is disappointing.