Dil Juunglee movie review: Shallow and dull, this one is a pain

Sure, most romantic comedies are predictable, unrealistic and corny, but some films are so bad, they’re actually good. 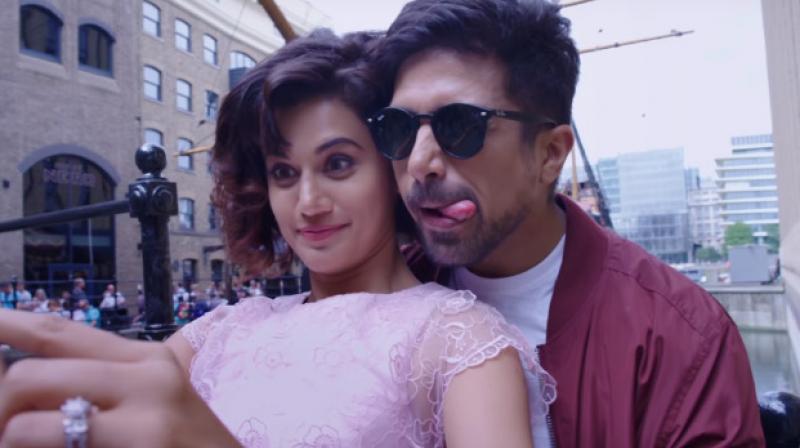 Saqib Saleem and Taapsee Pannu in a still from 'Dil Juunglee.'
Rating:

The first thing that came to my mind after watching Aleya Sen Sharma’s Dil Juunglee was to question the source of funding for a film that clearly had no clue which way to head, because there’s nothing worse than spending an early morning with a heartbreakingly bad movie. Sure, most romantic comedies are predictable, unrealistic and corny, but some films are so bad, they’re actually good. Also, the film is credited to actor producer Jackky Bhagnani as the creative director, no less!

Touted as a romantic comedy this Taapsee Pannu and Saqib Saleem starrer is the kind of film whose screenwriting, acting and plot twists are so unforgivable, they leave you more embarrassed than entertained. In fact, like many among the audience did, you might not even make it through the whole thing.

There’s no plausible story to speak of, but for all those who would still wish to know, it’s about Koroli Nair or Koro (Taapsee Pannu), who is the sole child of a London-based business tycoon, is nerdy and goofy. She settles in New Delhi to fulfil her “pursuit of happiness” and teaches English at the British Council, which makes her feel content in her own way. That she has no interest in her dad’s business is obviously a cause of concern for him. Her sole ambition in life is to get married and enjoy the joys of motherhood to her future kids.

Her diametrically opposite student, Sumit Uppal, a typical Lajpat Nagar highly ambitious lad wants to make it big as an actor in Bollywood, and works as the star trainer at a local gym where he has also worked on his physique. He dreams of walking the red carpet, some day, and brush shoulders with some of Bollywood’s finest. He joins Koroli’s English class at the language school, and in a strange quirk of fate, she falls for Sumit and together they decide to elope to Mumbai where Sumit could try his luck in Bollywood. Their dreams get shattered when Sumit’s car, which Koro was driving, loses control, forcing all of them to fall in a canal. Taking the arduous journey to Mumbai on foot, they realise the futility of their dream, get into petty fights and become grumpy as all their hopes come crashing down.

From then on, the story that should have revolved around their friendship or romance goes all over the place. And you immediately know that you are in for a long and painful ride. If director Sen was trying to tell us the ups and downs that typically run parallel with love and friendship, more so, when the two involved belong to contrasting background, she misplaces the angle of fun, crazed love and madness.

The film jumps seven years later to a time when Koro is a hotshot, smart, elegant executive in her father’s firm in London, and calls the shots even as her fiancé hovers around her.

Sen allows all the possible clichés to be fitted into the film as Koro is seen being chased by Sumit who is on a small-time assignment for a campaign that he keeps himself busy with to eke out a living. Their sudden meeting, Sumit’s desperate bid to win her back, and Koro’s first reluctance, and then gradual acceptance is so forced that it looks that Sen, somehow, wanted to include the Karan Johar sequence to make sure it looked like a homage to the director.

Or else the film looks like listening to a bedtime story by one’s grandmother, who often loses track of the previous night’s serialised finale. Pannu stumbles through her performance with cheesy delivery and Saleem infuses all his energetic zeal to pep up the film that actually has not one or two but three forced storylines getting fused and unified together.