The first one has a rich, presumably a spoilt brat, Vilas Naik (Pulkit Samrat) hunting for a flat for himself. 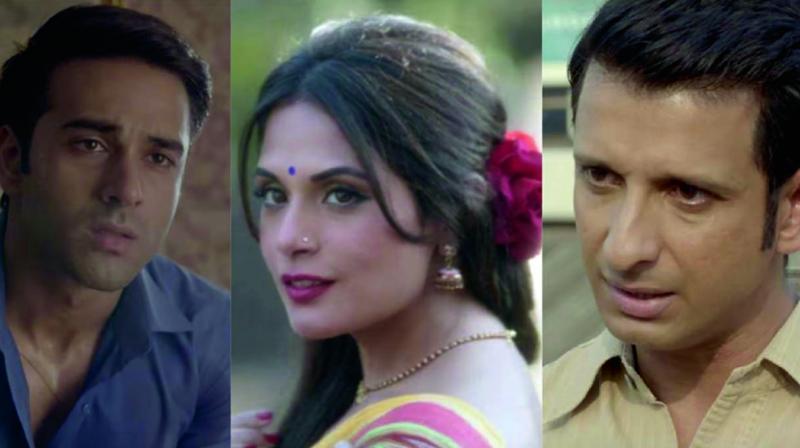 The twist is unexpected and jolts one out of their seats.
Rating:

Chawls in Mumbai have their own unique habitation where though primarily middle-class, yet a wide cross-section of multilayered echelons of Mumbai’s society reside — all displaying bonhomie and easy camaraderie that the high society condominiums seldom have. Debutant director Arjun Mukerjee’s 3 Storeys delves deeply into three or rather four families and their ordeals, and without dissecting the lives of characters threadbare, leaves you shocked. Not necessarily with a view to making stories follow a natural progression, but clearly, intentionally.

A format with three or four tales intersecting and overlapping into a complete whole has been quite popular in Europe, and, in Hollywood too, and even Bollywood has attempted to merge different accounts quite a few times, as in Hrishikesh Mukherjee’s Musafir way back in the ’60s, and more recently in Onir’s I Am and in Kiran Rao’s Dhobi Ghat.

3 Storeys, as the title suggests, has three yarns of people living on three different floors of a building. The first one has a rich, presumably a spoilt brat, Vilas Naik (Pulkit Samrat) hunting for a flat for himself. When his real estate agent takes him to Mayanagar, Vilas feels satisfied on meeting the owner Flory Mendonca (Renuka Shahane). Flory looks a tad cranky but Vilas seems to like the flat and gives his nod writing a cheque immediately as per Flory’s demands. It is when he starts nudging her to share her story that one gets a glimpse of tragic circumstances that led to the death of her only son and husband. What follows is a twist that would instantly remind viewers of the British novelist and short-story writer Roald Dahl’s unanticipated endings, and his unsentimental, macabre, often darkly comic mood, featuring villainous adult enemies of child characters. The twist is unexpected and jolts one out of their seats.

The next one is about Varsha (Masumeh Makhija) whose alcoholic and abusive husband makes her pine for her lost lover Shankar Verma (Sharman Joshi) all the more. When she unknowingly befriends her neighbour and finds out that Varsha’s past catches up with her when her new family moves in the same building. On Shankar’s return from Dubai where he works, she gets torn between being a duty-bound wife and her strain and conflict that her former love brings.

The last is about two miserable teenagers — a Muslim boy and a Hindu girl — who find their respective parents a stumbling block to their plans of elopement. Needless to add that all the stories have intriguing climaxes full of twists and turns. During the course of three acts, dark secrets and past regrets get revealed, and the narrator (Richa Chadda), who is herself a minor character living in the same building, underlines the volatility and misapprehension of the small community.

While it is commendable to see fresh ideas being dished out in Bollywood, the overall treatment of a complex structure leaves a lot to be desired. Both Renuka and Masumeh are complete miscasts in their roles. Contrary to her benign and caring image that Shahane has often displayed in playing bhabhi or wife in the little body of work that she has done, her rough disposition here is clearly to add an element of surprise for viewers. Resultantly, at times, her presence is in sync with the demands of the story, but mostly she looks ill at ease to look the oddity that she is expected to be. Masumeh tries hard to underscore the lower middle class emotions. It is Sharman Joshi who lights up the screen every time he appears. Other bit role players, including the good-hearted cop played by Himanshu Malik, are also equally convincing.

What fails to lift the film, despite its heft and unusual narrative, are some sketchy episodic tales, particularly that of the Hindu-Muslim love affair that one wished had more substance. Mukerjee, it seems underplays some of the film’s most dramatic moments, may be deliberately to ensure that his audience, after getting a jarring blow, ponders over. But the fleeting flashes of underlying warm sentiment dominate the film’s intensely striking and remarkable instants for them to register with his audience.