Naina may be a happily married businesswoman but has a secret lover, Arjun (Tony Luke), with whom she gets involved in an accident. 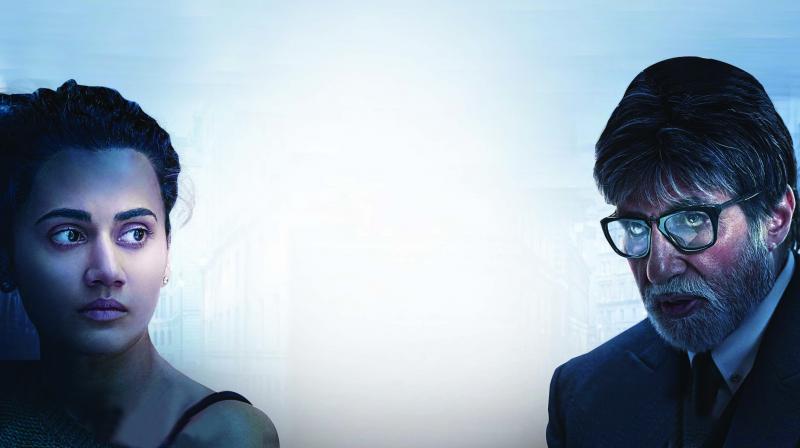 It takes a highly imaginative team of writers to come up with an entertaining crime mystery which has plenty of nerve and vigour. We have had a spate of masala films in Hindi where some young filmmakers have dished out stories and crime dramas with an alarming abundance of stupidity. Of course, Sujoy Ghosh is different: His Kahaani — not its mind-numbing sequel Kahaani 2 — has been one of the most original stories to have hit screens in the last decade or so. This time, Ghosh gives us Badla — a faithful remake of the Spanish whodunit Oriol Paulo’s The Invisible Guest, and stars Amitabh Bachchan and Taapsee Pannu as central characters.

There are twists and some standard fare as far as predictability goes; but as long as you are transfixed on the action that seems to take you along every moment of its screen time, the thrill continues, and you enjoy yourself thoroughly.

After waking up next to her now dead lover in a hotel room, a young and very successful businesswoman Naina (Taapsee Pannu) hires a prominent lawyer Badal Gupta (Amitabh Bachchan) to figure out how she became a murder suspect.

Naina may be a happily married businesswoman but has a secret lover, Arjun (Tony Luke), with whom she gets involved in an accident. She is also having doubts about continuing with the relationship as she seems to be happy with her husband and little baby daughter. Soon, Arjun starts showing signs of not the usual romantic liaison that we all believe he would be. We also learn that the accident has witnesses, and finally, leads to Arjun’s murder, a factual detail that gets progressively revealed as the movie moves forward with the conversations between her and Badal Gupta. As the narrative moves back and forth in various stages of occurrences, we, as viewers, enjoy every moment of this voyeuristic roller coaster ride of two hours in which it’s either Naina answering queries by Badal Gupta, or Badal trying his best to piece together improbable possibilities to come up with a plausible explanation.

Although the original director and writer, Paulo, is credited with the story, to make sure that the Spanish remake doesn’t look entirely a slavish copy, Ghosh has included Indian references like those of Lord Krishna’s, Arjuna’s, Dhritarashtra’s, Sanjaya’s and Draupadi’s to make sure that as the all-knowing lawyer, Bachchan becomes the film’s central character as the retired advocate who has never lost a case in a 40-year career.

By now, it’s foolish to state that Bachchan enjoys every frame that he gets featured in; he makes sure he gets the best lines — not to mention the finest linen — to keep your eyes only on him. But it is also the women here who are equally riveting. Both Pannu and Amrita Singh (as the mother of a missing son) hold many scenes on the sheer strength of their solid presence and perfectly steely exterior.

In any mystery thriller, there are script-turns that are some of the best weapons that any film must use to conquer the viewers. But they must surprise us. Or make sure that we are glued to every scene whether or not we believe in their doubtfulness or questionability. Badla has tightly woven and though it does get into the problem of resorting to make sense of what one has seen at times, it does achieve to completely destroy everything in the following scenes. That, in particular, makes this an edge-of-the-seat drama with great performances by the lead actors. It manages to tug at the loose threads of a woman’s alibi who is accused of murdering her lover, exposing how just one lie can unravel into a full-blown tragedy.

The audience loves the guessing game and never loses interest. The obligatory nature of the plot’s likelihood has an internal logic, which is plausible within the narrative, with precious little documents of reality. But so what? As I said earlier, we are happy to go along the not-to-be-missed ride.

This one is not meant for all those teenyboppers who want an outing to cootchie-coo and munch popcorns in a dark theatre, or allow their fingers to tap and swipe their phones constantly. It requires dedicated viewing, and it’s very gripping! Go, watch it!