This is a story that apparently doesn’t have a lot to offer; it also distracts more than it takes you along. 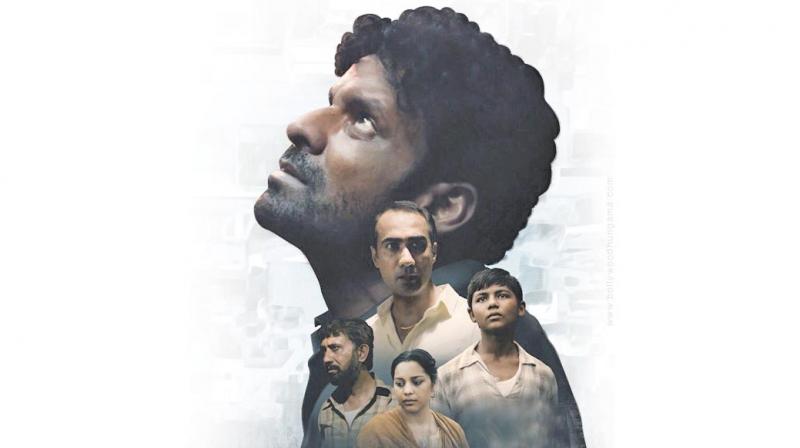 A maze of narrow bylanes in Old Delhi where enmeshed electric wires almost tell stories of cheek-by-jowl existence of many homes, a loner sits in his home that looks more of a hideout, and is seen watching intently scenes of everyday occurrences in his neighbourhood on his surveillance monitors.

Debutant director Dipesh Jain’s Gali Guleiyan (In the Shadows) is quick to set the tone of this 115-minute film with William S. Burroughs’ line: There are no innocent bystanders… what are they doing there in the first place? And immediately thereafter, as if on cue, Khuddus (Manoj Bajpayee) is seen in the densely-populated area of Old Delhi’s nucleus going about his daily grind of observing other people’s lives on television monitors with an air of nonchalance to make it seem that he is doing a job. His intention is not known though; he may have been instructed to do all this as an assigned work, or he could be just prying.

What does get clear is his disconnect with life that makes Khuddus an oddball, despite his curious peeping into the lives of others. The claustrophobic world that he inhabits is interrupted only when his loyalist friend Ganeshi (Ranvir Shorey) visits him and brings food for him. “Pyar karta hoon tujhse… (I care for you),” he confesses when Khuddus becomes incommunicado for four-five days.

One such day, Khuddus’ rich brother shows up at the door after 23 years, and asks for a necklace their mother had left behind. The brother wants it for his daughter’s marriage. When Khuddus starts looking for the valuable rummaging through the cupboard, he overhears a disturbing conversation between a man and a woman emanating from the adjacent house. The neighbour whose wall he shares has three people: a young 13-year-old boy Idris, his loving mother, Saira (Shahana Goswami) and a ruthless father, Liaqat (Neeraj Kabi). Liaqat runs a butcher shop, and as his daily routing of butchering animals would suggest, he carries forth slaying his family’s dreams and aspirations and makes a mess of their lives. Khuddus hears him beat-up Idris, and decides to help the boy. Idris too is in no mood to comply with his father’s demanding nature, and would rather run away somewhere.

Gali Guleiyan confidently establishes its own tone and milieu through a calmly justified faith in its material. The plot shows complete hopelessness than any optimism, but is never less than honest.

Jain intersects the two worlds that both Khuddus and Idris inhabit without letting the viewer comprehend the complexity that unites the two. In that sense, the tagline of the film being psychological thriller gets justified to some extent.

To many in the audience waiting for a substantive chunk of climax to take over and lead them through the final revelation, the narrative can be both startling or comforting, depending on onlookers’ grasp of such an intense film. There might be too many loose ends that many of them would want to know more about much after the climax stuns them.

There will be some division between all those who would almost undertake the journey from within themselves and submit themselves into Khuddus’ world, and those who cannot fathom the convoluted web of a mind who has lost the battle with the outside world, and seems ensnared in his own psyche. But what everyone alike will be stumped by is the lead actor Bajpayee’s rock solid performance. After Hansal Mehta’s Aligarh, he sinks his teeth into something that displays his bravura role and allows his complete potential to go full throttle and come up with a sterling accomplishment. Despite portraying a character whose interaction with the outside world is minimalistic, and he doesn’t even look in the eye while conversing, he never loses Khuddus’ conviction.

Bordering on the almost maniacal paranoia, Khuddus could have been utterly dislikeable sans any human quality. Saving him from becoming an out and out negative, the National Award-winning actor lives the role with a gaze that is unsure, a demeanour that carries with it a hidden traumatic experience of the past and overall desperateness cluelessness about the impending dangers that life could bring about.

The supporting cast led by child actor Singh whose eyes speak volumes of the callous incorruptibility: Shahana Goswami as the pleasant mother, Neeraj Kabi as the father and Shorey as the do-gooder friend, are all great in their respective roles.

This is a story that apparently doesn’t have a lot to offer; it also distracts more than it takes you along. That it is intentionally uncomfortable is channelled consciously to discomfort watchers in a more focused way.

Jain in his debut shows immense promise and, clearly, gives in to the inevitable introspection that often grips most first-time directors.

He also gets a little too indulgent at times and nearly wavers but never loses track of the single-mindedness of his lead actor’s depiction. The storytelling gets clunky when the pace is inconsistent. What remains is the tension by Bajpayee and his unswerving trope.

Adding a certain obscurity to the film, Jain doesn’t make an effort to stave off the never-ending anxiety and also lets viewers engaged through the length of the film. Kai Miedendorp’s camerawork and Chris Witt’s crisp editing are two other qualities that lift the film.