Malaal movie review: A love story with no heart!

No, it may not dent Bhansali’s inventiveness and creativity — his recognisable style is well past scrutiny by now. 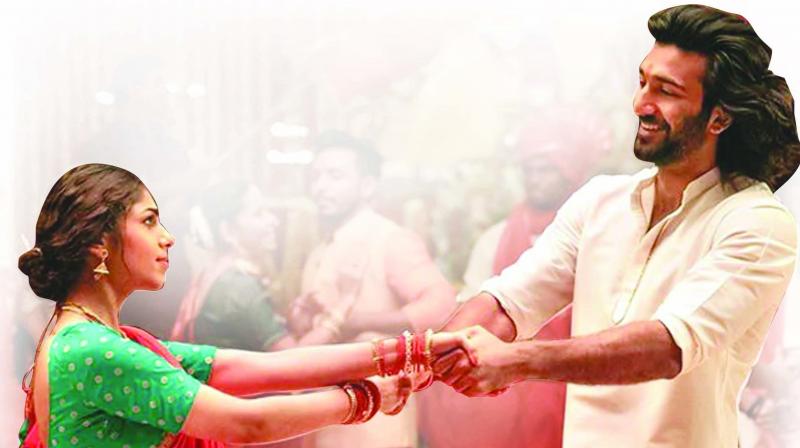 A still from the movie Malaal
Rating:

Every time a new romantic pair gets introduced on celluloid, which is almost always in a love story — and this happens quite a few times in a year — our expectations rise, more so, if the lead pair has an established lineage. Denying any nepotism by crying themselves hoarse to suggest that their coming up to the level of a good performer is a “hard struggle” rather than being the result of any special benefit handed out to them on a platter, these young stars do everything possible to get their act right — look camera-fit, perfect their dance moves, learn how to look convincing in the choreographed fights, and even go under the knife (if need be) to look their best. What many of them don’t much give an effort to is in honing their acting skills.

Sanjay Leela Bhansali’s SLB Films’ latest Malaal is one such romantic saga that doesn’t break new ground for the much-acclaimed director — on the contrary, it makes you reconsider the formidable reputation he has built for himself for more than the past two decades or so. No, it may not dent Bhansali’s inventiveness and creativity — his recognisable style is well past scrutiny by now.

I am sure many among the audience would have the urge to grab him and question, “Why? Just why do you need to give us this unrelieved misery devoid of substance?” You’d also wonder how these young debutants hope to survive in an industry where talent abounds?

Forget plodding wearily towards its predictable conclusion, the 136-minute film depicting the supposed journey of Shiva (Meezaan Jaffrey) and Aastha (Sharmin Segal), who are two very different people from contrasting backgrounds, is about their experiencing the innocence of love. But, it’s sad that even a love story that seldom fails to touch your heart cannot conceal its singular lack of heart.

Directed by Mangesh Hadawale, Malaal, (which literally translates into “remorse”) is a remake of the 2004 Tamil film 7/G Rainbow Colony. It doesn’t contemporise a tale that was originally set in the late 1990s, and so, suffers from the glitch that makes the nonsynchronous 20-year leap in the new version seem implausible.

Despite her father’s failing fortunes and sudden descent from his prosperous life after he suffers heavy losses in the stock market, Aastha seems to be happy in her new abode in Mumbai’s chawl when the family moves to Mumbai from Bihar. Nothing seems out of place — friendly neighbours, her continuance to follow her career as a chartered accountant, and a decent dwelling. She may be unsure of her feelings for the rich young man (who else?) she is engaged to (Bisht) due to her parents’ pressure, but looks pleased that the guy is not the suave and polished gentleman he looks, but is rather timid and spineless — obviously she has other designs!

Meanwhile, the only thing that goes awry for her is the next door aunty’s son Shiva (Meezaan Jaffrey) whose character more than reminds you of the week-before-last Hindi film release Kabir Singh: brash, hot-headed and boorish. Shiva is everything Aastha is not. But since love has to blossom, she discovers rare qualities in him, and even begins to make him see reason. Shiva, who at one point, was against the very presence of North Indians in his home state of Maharashtra and was determined to displace them, marvels at her fluent Marathi speaking abilities, and soon, the two fall in love.

No one would have any doubt that the director didn’t have any intentions of making a truly compelling masterpiece — he mounts the film lavishly. He doesn’t seem to have other credits in place though. The film seems to be an over-simplification and dives headlong into the complexities of the notion of “love” with a predictable and thoroughly clichéd script. The only quality that you admire is its cinematic appeal, enhanced by the contributions made by cinematographer Ragul Dharuman and art and production designer Akriti Piplani, whose efforts impact your movie viewing experience, even if none of the players exhibit much personality.

Tacked onto this tale of love is a belated romance that suddenly finds shape in the second half as the two lovers are shown spending time together or throwing bits of notes while exchanging glances in the balcony in the era when mobile phones and messages didn’t exist. But love in the times of middle-class mores must have serious consequences too. Shiva’s stalking Aastha that has her slapping him on a moving bus, has to have crucial repercussions, not necessarily always pleasant. To make things simpler and trouble-free, that would also lead to Aastha’s uncomplicated love getting streamlined, her fiancé Dev is seen more as a villain all out to avenge his betrothed girl’s affront personally. And then begins the development of the third man in the triangle in the making.

Sadly, nothing in terms of a believable plot with a fresh perspective is added to the story, and soon, Aastha’s and Shiva’s association that seems more unclear and undeveloped, gets concretised. One cannot fault the characters alone. It’s the way the story progresses that required more adept handling. So heartless does their romance appear that even when the lovers are united or separated, there isn’t anything that would make the viewers go all out and feel for both or either of the two lovers. Good acting could have salvaged this film, but given that the new stars are very amateurish, you don’t have much expectation.

Is there anything new about the two? There is. Of the two, Aastha is more resolute and driven while Shiva continues to get away with defiance and rebelliousness who is all out to gratify his wayward desires. Aastha, therefore, has her head on her shoulders. That may be new for a 20-something girl!

Jaffrey has some screen presence, and allows himself to bask in the protagonist’s role, but how you wish he had displayed some sincere acting skills too. Even when he leaps, cavorts, jumps and twirls in the song sequences, you wish he had inherited some of his father Javed Jaffrey’s superb grace as a dancer. He has a long way to go in his emotive range to be able to try out other genres in the long run. Segal in comparison is subtle and looks like someone who could, with some polish, improve.

With so much money riding on them, will their splendid launch in their debut do any good?