Arnab Banerjee
The writer is a film critic and has been reviewing films for over 15 years. He also writes on music, art

Or the routine cop who appears in a couple of scenes parroting the same lines in virtually every film. 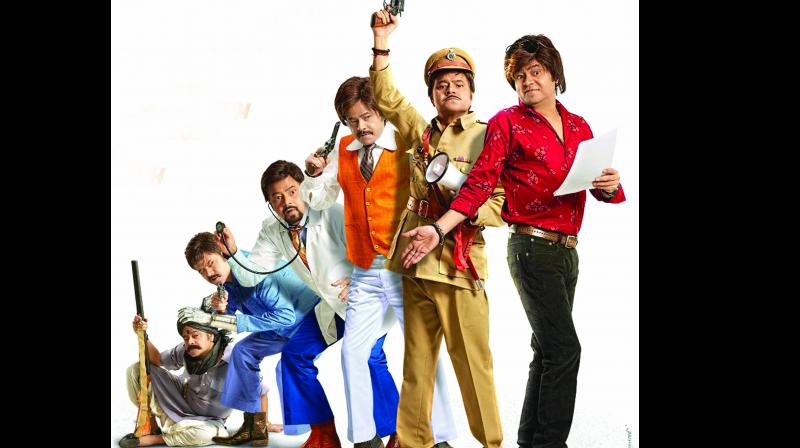 There is enough to sit back and wonder about some of the familiar faces we are all acquainted with but seldom give a second thought to.

Being just another face in the crowd can actually be a fairly lucrative career, and professional extras can make a pretty penny by simply blending into the background. Actor Sanjay Mishra, who has time and again proved his versatility in diverse roles, somewhat sums up his own huge contribution to films by calling his character Sudheer in Kaamyaab as “Aloo” (Potato) — the one who could fit into any role and situation. While the focus in Hardik Mehta’s Kaamyaab is on Mishra himself as the lead protagonist, his character of someone continually playing bit roles in umpteen Hindi films gives us an insight into the lives of many wannabe actors who were obviously bitten by the acting bug, but didn’t make a name for themselves.

Sudheer (Sanjay Mishra, not to be confused with villain Sudhir, who invariably played Ranjeet’s sidekick in the Bollywood of the 1970s and 1980s) the actor has an elevated status in the film industry, but along with the money and respect he has earned over the years, he remains an equally unsatisfying person. He does get recognised by not just some of his fans but also by the young generation whenever he preens himself sporting floral shirts and steps out flamboyantly dressed. When a television crew comes to his place to interview him, he gets a pleasant surprise to know that he has acted in 499 films, and is just one film short of making it to 500 films. By just doing another bit part, he could add one more statistic to adorn his resume, and pats himself on the back with yet another landmark. And so, he must attempt at trying out his luck with casting director Gulati (Deepak Dobriyal), who, by his own admission, owes it to Sudheer for making it big in the highly competitive world of cinema. Can Sudheer make it? Is he bale to cross the milestone? Director Mehta explores the careers of background actors who support and provide many marquee names with a canvas on which they can truly shine. He also makes us ask if it’s possible to build an entire career in the far side of the frame, maybe, as the man behind the dead body. Or the routine cop who appears in a couple of scenes parroting the same lines in virtually every film.

With a subject that’s rarely explored, Mehta does raise an enquiry into this and many other questions in a film that explores a subject rarely pondered by casual movie lovers. But despite the film’s novelty, he fails to give us any fresh satirical insights into the world of entertainment.

Sudheer leads a lonely life all alone although his daughter Bhavna (Sarika Singh) and her husband and daughter are caring and concerned about his well-being. She is equally disapproving of his sudden flush of excitement to complete 500 films only because his last film ran into a controversy when a sleazy producer had interpolated a steamy scene that led to a distasteful experience. Egged on by Gulati and driven by the passion and his last-ditch attempt at stardom one more time, Sudheer begins to chase his unfulfilled ambition.

There is enough to sit back and wonder about some of the familiar faces we are all acquainted with but seldom give a second thought to. The routine characters that flip in and out in crucial scenes in hospitals, police stations and offices quite matter-of-factly go about performing perfunctorily without so much as any serious instructive pieces of advice coming from the director’s team. Quite obviously, it must be the assistants, and not the man at the helm, in charge of such mundane unchanging scenes. As expected, there’s the requisite cringeworthy humour and a few impressive cameos by Manmauji, Anil Nagrath, the late Viju Khote, Manoj Bakshi, Birbal, Avtar Gill, Guddi Maruti, Nasser, Lilliput, Ramesh Goyal and others, who appear as themselves while adding their own stories. Throw in some loveable crooks and some not so loveable ones and you have, largely thanks to a great cast, a very funny film comedy. All along, as we get a glimpse into their virtually nondescript lives, the film ultimately offers a cautionary tale through personal struggles too. Of course, everyone loves a star, that too, to the extent that all others around him or her become inconsequential. Only a close scrutiny would make one realise that perhaps, without some of the background or supporting actors, many of the lad stars may not be able to make a mark in a scene that everyone hails as the life of a blockbuster at times.

At the fag end of his career, Sudheer, despite his best efforts to steal a line, milk a scene or network with the crew, is unable to perform with ease, and falters, leaving the lead star lose patience. The past glory of having made it from a nameless cast member to an actor who delivers a few lines to provide ample backup to the hero, he cannot be a mere prop. But his ageing body comes in the way and he loses his most prized role.

The film shatters the myth that it’s quite easy to be an extra, and tears down this illusion through showing all the legwork, networking and waiting required.

Mishra essays his role with the right mix of sadness and pepped up energy. It’s the unevenness and hackneyed narrative that lets him down. Whether relishing the chance to slaughter a period drama with elan, or proving a cowardly letch, he displays delightful self-deprecation and comic timing.

When he can’t read lines or memorise them well, his wizardry at improvisation seems a lost talent; others cannot fathom how brilliant he used to be with lines. Lacking the narrative dexterity and sleight of hand of its predecessor, Kaamyaab unfolds in a series of self-contained vignettes, loosely held together by an overpopulated ensemble of sketchily developed characters. The most substantial of these is the lead Mishra, but with no explanation given for his cripplingly delicate disposition, it’s also a struggle to empathise with him.