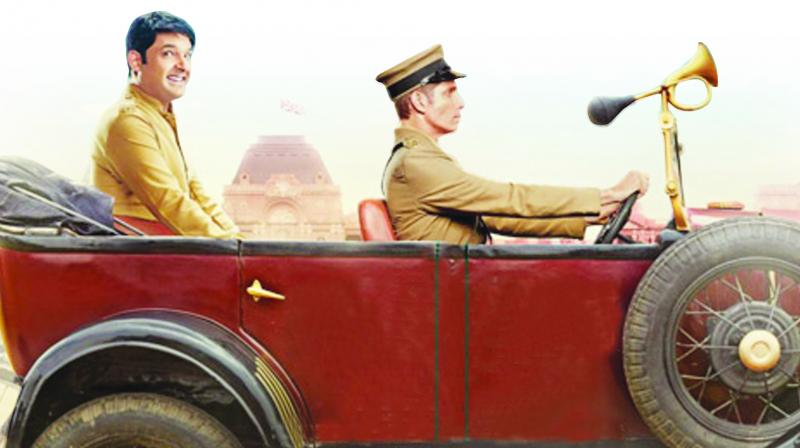 One of the many reasons why the Ashutosh Gowariker directed Lagaan became such a huge hit was its emotional connect that seldom goes wrong for Indian audiences. A storyline with a group of poor old men and women pitted against the rich and the powerful; a budding romance; village dwellers shown as powerless; authoritative landowners who are invariably ruthless; and an over two-hour-long narrative offering confrontational plot with dollops of nationalism thrown in, cannot go wrong in arousing the right emotions among cinegoers. And yes, there has to be a song or two to keep your interests alive.

Considering that Sharma’s Bollywood debut in the lead Kis Kis Ko Pyar Karun was a disaster, I must confess that even before watching his latest, I had very low expectations. Even when I heard the booming Big B as the voiceover in the opening scenes, it didn’t affect me much. But 10 minutes into this technically-sound 160-minute Rajiev Dhingra directed film which has good production values too, made me realize that, perhaps, Sharma, is serious about his career as a Bollywood hero too.

Does he then have it in him to play the lead in a major film or can he carry an entire film on his shoulders with elan? Not at all.

For all those talented lot of struggling actors, striving hard to find a toehold in Bollywood, it’s really unfair to let a standup (who’s good at what he does and gets handsomely paid for it as well) hog so much screen time. That too, without so much as making the requisite effort to get serious about enacting such a significant lead hero’s character.

It’s 1921 in the Punjab of the British-ruled India where the swadeshi vs the firangis are either engaged in bonhomie or seen in provocatively combative association. It also has a naïve and gullible Manga (Sharma) who doesn’t believe that all firangis are wrong, falls in love with Sargi (Ishita Dutta) but gets innocently drawn into Raja Indraveer Singh’s (Kumud Mishra) machinations, when Singh colludes with the English official Mark Daniels (Edward Sonnenblick) to dislodge the poor villagers from the inhabited land they had been occupying for decades, all for his personal gains and build a liquor factory. Their deceit includes a marriage alliance between Daniels and Rajasaab’s Oxford-educated daughter Shyamali (Monica Gill).

With so much accurate history as the backdrop and so much material to rely on, the film could have hit the jackpot. Sharma must have also believed that he could do a Khan when he decided to produce this film. But the role clearly goes against his grain; his deadpan expression, puffed up eyes that may be underline his fatigue, don’t make him appear comfortable in the film, thought it duration. It’s only when, in a couple of scenes, he inadvertently allows himself to play Manga as the slow-witted nerdy orderly that he begins to shine a bit. By and large, he disappoints and never looks the part. Neither does he feel the lines he delivers. For instance, in a scene, when the British use Manga to hoodwink the villagers into signing their property papers they hold so dear, the helplessness he displays or his efforts in winning back his fellow village folks’ trust is hardly palpable. He is too casual in his approach, and it doesn’t work. His resolve to set things right, too falls flat.

As a stand-up comedian, Sharma has a simple definition of comedy that mostly makes fun of people, and appeals to a certain kind of audience. If this was intended as a comedy-drama hybrid it might have worked. But to illustrate it against the real-life backdrop — such guidelines work as an organic whole, and not when the threat of individual success takes root. The film gets tricky when the focus shifts from individuals to one man — Sharma. The urge and propelling actions for personal gain rubs up uncomfortably against the goals of the entire film.

In some ways, that also explains my reaction to this film as a whole.

Firangi is a far more dramatic and perplexing affair than a comic one. Even then, there are some scenes and characters who unintentionally make you laugh. Rajasaab’s daughter, for instance. She has just returned from Oxford, but insists on speaking in the Queen’s English in an American accent, that too with fellow Indians.

Other actors suffer. A few of them who deserve much better and fleshed out roles like Anjan Srivastava, Jameel Khan, Rajesh Sharma, Ram Gopal Bajaj and Kumud Mishra, don’t have much meat in their ill-conceived roles. The biggest undoing is to interweave languorously the non-cooperation movement — that led to the Quit India movement subsequently — with a love story and a story on guile and fraud. Despite such concrete premise, the screenplay hardly ever uses anything worthwhile to add some substance or to stir up action.

Of course, Sharma laboring to look ‘serious’ is a miscast and proves to be the biggest drawback of the film. And at the end, just like the man he plays in the film, who can cure a crick or a backache by kicking the patient on the bum, you feel like giving one such hard-hitting one at this ambitious actor. He must get back to his serious business of comedy.