Jackie Shroff, it seems, doesn’t really know what the storyline and tries to fit in hesitatingly. 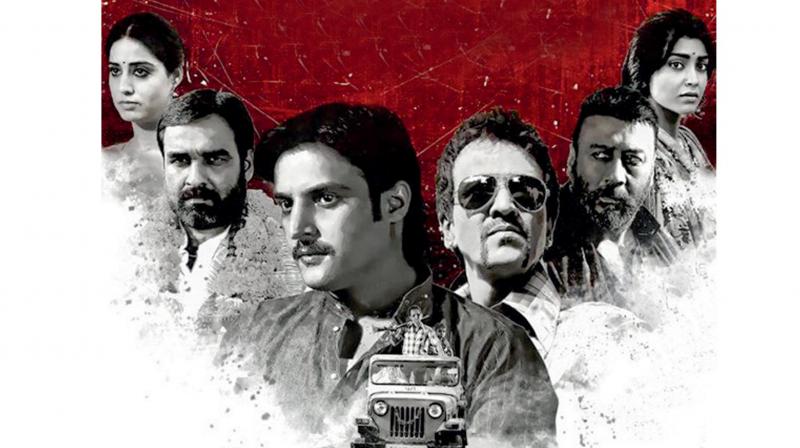 A still from 'Phamous'
Rating:

For all those who have grown up in the ’60s and ’70s, the typical Bollywood films with a daku (dacoit) in the central role were aplenty. And so one has seen the usual moustachioed burly hero who would time and again roar but only if he saw any wrong. Unmistakably, he had a heart of gold, and was the Indian Robinhood.

In the present, when slice-of-life themes rule, such films will rarely find acceptance unless they are mounted on a large scale, or cut the mumbo jumbo and tell a tale with gusto and fanfare. Therefore, among the present lot of directors, there’s a rare Paan Singh Tomar or a Bandit Queen that have won our hearts for their honest portrayal of bandits of the hinterland.

Director Karan Lalit Bhutani’s Phamous (note the “Ph” that the title of the film uses as a Hindi alphabet) is set in the badlands of the Chambal region of Madhya Pradesh with a power struggle between its four principal characters forming the crux of its story — Shambhu (Jackie Shroff), Kadak Singh (Kay Kay Menon), Ram Vijay (Pankaj Tripathi) and Radhe (Jimmy Sheirgill). The hamlet abounds in power-hungry, unscrupulous and depraved men who get away with murder. In one such ill-fated incident Shambhu’s daughter is being forcibly taken away by Ram Vijay, and Shambhu opens fire to prevent him from kidnapping his daughter, but lands up in prison for accidentally shooting his daughter dead.

Some years later, Radhe who was a kid when the incident took place, grows up and dreams of having his own clout in the area. He respects Kadak Singh, who along with Ram Vijay has dubious plans of becoming MP and MLA respectively. But when Ram Vijay sets his lecherous eyes on Radhe’s wife Lalli (Shriya Saran), Radhe has to make a choice: should he protect his honour and teach a lesson to Vijay, or continue to play up to Kadak Singh for further personal gains?

From there on, we assume that the story would end up either in the culmination of power game or become a revenge drama. It doesn’t disappoint you for it becomes both as Shambhu gets freed from jail and a young Radhe’s blood boils when his wife gets kidnapped by Vijay. Together they lust for Vijay’s blood.

Narratively, the film feels both underdeveloped and overwrought, its script guessable and its climax in the rocky countryside most idiotic. Everything looks like a frantic effort to put together drama in the midst of gangsters, pistols, revenge and mayhem with good actors delivering lines they don’t find convincing. The result is a sadly muddled finale that instead of skilfully capturing a sense of real life for characters caught in a difficult situations, takes the route of violence.

Jackie Shroff, it seems, doesn’t really know what the storyline and tries to fit in hesitatingly. Kay Kay Menon looks desperate to hog all the limelight and tries to mouth all his lines menacingly. Sheirgill struggles to stay young alternating his looks between young and the middle-aged in an ill-fitting wig. His role doesn’t give him enough possibility to perform, and it is his poorly written role that he has to struggle with the most. If there’s one actor who takes his character seriously it is Tripathi who, even in the silliest of scenes, outshines whosoever and whatsoever is in the frame, and emerges the most engaging character on the screen.

Should one, then, give it a miss? Watch it for the five and a half scenes of Pankaj Tripathi, if you must!