Laxman Utekar’s debut film has an interesting premise, but it isn’t that film you have been waiting for: 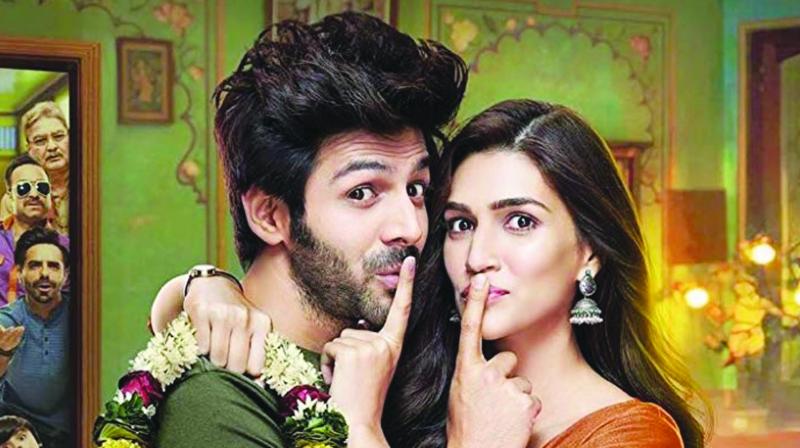 The writer is unable to impose rhythm on the escalating complications, and often allows a scene to go on far too long, without any solid material.
Rating:

The romantic comedy Luka Chhupi functions as a guidebook of sorts to the somewhat hesitant couple who have just fallen for each other, but coming from the small town of Mathura, they look rather unsure of whether to tie the knot or not — especially the girl, who demands more time to weigh the situation before making a decision. She has reservations about the boy — or whether she really likes him-or not — and suggests that they go in for a live-in relationship!

Laxman Utekar’s debut film has an interesting premise, but it isn’t that film you have been waiting for: The modern take on the relationship between a boy and a girl who are unmarried, and would rather stay together without engaging into a legally binding association.

Set in Mathura, it merely gives us a bird’s view of how small towns in North India enjoy all the accoutrements of the modern world, and yet, when it comes to the age-old mindset ingrained in antiquated values, the local residents have a long way to go. I am not too sure if the Indian middle-class is still regressively outdated; or that it would take another century for them to come to terms with the 20th century’s rapid changes as we have seen in the last decade or so. Many characters in the film continue to be non-conformist in their outlook, and are in fact oddities as contemporary parents or individuals in this day and age.

As the mast maula, Gudu Shukla (Aaryan), we have a hero, who, in his own right, is the star reporter of a Mathura cable news channel. His cameraman Abbas (Aparshakti Khurana) is someone Guddu counts on, both as a team out to cover news locally, as well as, for his own personal comfort and support. Guddu’s parents Badriprasad Shukla (Atul Srivastava) and Shakuntala (Alka Amin) continue to live a life full of antiquated values that is reminiscent of the 1960’s.

Guddu’s brother-in-law Babulal (Pankaj Tripathi) is someone who does nothing for a living and spends all his time lustily chasing married women and whiling away time. Guddu falls for his intern, the headstrong Rashmi Trivedi (Kriti Sanon), who has just landed from the capital city of New Delhi, and is keen to learn the ropes of television journalism before branching out to greener pastures.

Meanwhile, all hell breaks loose as one of Bollywood’s most sought-after stars Nazeem Khan is hounded by the media and slammed for his live-in relationship. Quite obviously, no one likes such bold-faced cheeky behaviour of a role model.

The self-righteous custodians of morality — principal among them being Rashmi’s father Vishnu Prasad Trivedi (Vinay Pathak) of the Sanskriti Raksha Manch — have an even larger issue: They wouldn’t approve of such an unacceptable act by someone who belongs to the minority community. Fortunately for Guddu, it is Rashmi who has no reservations about not conforming to social customs, and is gung-ho right about moving into a place with him.

What follows next is routine: The social hindrances loom large to ruin their romance and Guddu’s family discovers his luka chhupi (hide and seek) union, and threaten them with dire consequences. Guddu’s parents throw a fit and the couple decides to formalise their bond in the presence of their respective parents and of course, a priest. Not that it’s a smooth run thereafter; several familial characters and sudden quirks of the couple derail the proceedings while intermittently giving us hope of a few bright spots here and there, only to degenerate into nothingness.

Director Utekar and writer Rohan Shankar had probably come across a rigorously even-handed idea about how people in small towns and cities are still grappling with the fast evolving notions of marriage, cohabitation and old rituals. That they are unimaginative begins to show right after the first half when clichéd situations never allow the film to take off. All the tumult that follows looks premeditated and doesn’t mesh together with the incompatible viewpoints and motivations of the old and the young. The original premise could have been developed into something of great measure, like the new generation gradually controlling the outdated values and having its way. Funnily enough, it’s the women (Rashmi; Guddu’s mother; another old woman on the street) who seem to be far more progressive in their views and are seen welcoming the freshness of the bold departure from the traditional. Lazy writing makes it less witty and enrapturing. The madly-in-love couple in the throes of amorous passion even try to maintain their liaison as they descend deeper and deeper into the insular world of domestic nitty-gritties. After the emotional upheaval of all the loads they are forced to endure, they do poke fun at the institution of marriage. Too bad, it is perilously close to losing appeal even as it tries hard to expose the foibles of conventional relationships.

The writer is unable to impose rhythm on the escalating complications, and often allows a scene to go on far too long, without any solid material. The drama strains to achieve characters’ conflicts convincingly, stretching between breezy satire and convention mores .The result is, at times, a skilfully rehearsed script reading rather than unexpected turn-of-life events.

Aaryan does whatever he can to step into the shoes of the current crop of successful heroes: Rajkummar Rao, Shahid Kapoor, Ranveer Singh, Ranbir Kapoor, to name a few. Is this the film that could catapult him to their level? Nah, he needs a lot more to blend chutzpah and emotive range to pull off comedy. For Sanon too, this may not be the ideal vehicle to allow her to go up the ladder, but it’s her natural charm that has an instant appeal. Scene-stealers Tripathy and Khurana have the right skills to give us a few laughs but the poor execution of this mostly unamusing two-hour comedy makes it an opportunity lost!