There’s a timeless saying that dying is easy while comedy is hard. 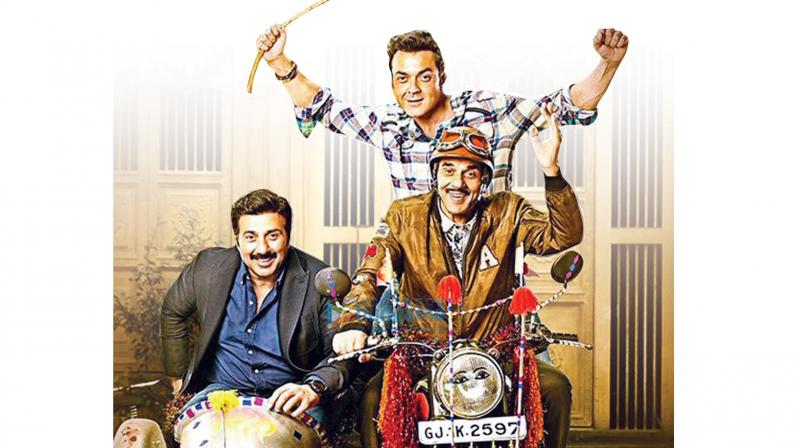 The Deols are back. That sounds more like a warning than a reminder since no matter what the overall outcome of their earlier films, the trio (Dharmendra, Sunny and Bobby Deol) is relentlessly carrying on inflicting us with more torture. Earlier, they gave us a few jokes despite an unfunny assemblage of comedy sketches, but their third franchise (fittingly suffixing their title with “Phir Se” is anything but a film!

As for the lead cast, citing the combined collections of both the earlier films (Yamla Pagla Deewana and Yamla Pagla Deewana 2) were reason enough for these Punjab da puttars to plan yet another film. But few things are more cringeworthy than a flat comedy. My weariness of sitting through a 148-minute film is not just that it looks more like the traditional “House House” game where children take on the roles of adults in a make-believe nuclear world. It’s much worse. Here, it’s clear that the family decided to make a film after finance came their way, and reached the set without so much as a basic storyline in place. Besides the sheer ineptitude that it boasts of, my exhaustion multiplied as soon as the characters started to act funny but with no lunacy behind them. The result is offensive, brutally awful, grossly humourless and absolute garbage.

It appears that once a director Navaniat Singh came on board, the Deols had a brainwave to play whatsoever they could come up with.

Therefore, Sunny plays Pooran, a good-hearted brother whose inheritance of a legacy of the famed Ayurveda remedy “Vajrakwach” from his ancestors earns him the formidable reputation of having the panacea for all ailments. His brother Kaala (Bobby Deol) lazes around but dreams of making millions with the use of the special herbal formula. Their tenant Parmar (Dharmendra) is an erstwhile Casanova and a colourful character but is also a sharp lawyer of repute. Adding to the Punjabi mix, Chikoo (Kriti Kharbanda) is a pretty girl, who comes all the way from Gujarat to steal their trade secret, but ends up falling for Kaala’s charm instead.

Criminally unimaginative right from the word go, the film degrades further when pharmaceutical magnate Marfatia (Mohan Kapoor) steals the formula after having failed to persuade Pooran to part with it. A lawsuit follows and Shatrughan Sinha as the judge adjudicates when a criminal conspiracy charge is slapped on Pooran fraudulently by Marfatia.

Bobby gets more screen time while Sunny plays the do-gooder. Given a chance though, he leaps into action and tries hard to re-establish his macho “dhai kilo ka haath” image beating goondas to a pulp and knocking down a part of a cemented wall in a fit of rage. Their octogenarian father has his way in a desperate attempt to raise a few laughs, particularly when he ribs Sinha, who plays his college mate. His strained attempts at ham-fisted dialogues don’t make any impact; it’s a mockery of his perfect comic timing displayed in his earlier films — Pratigya and Chupke Chupke.

There’s a timeless saying that dying is easy while comedy is hard. If only producers Kamayani Punia Sharma and Aarushi Malhotra and dialogue writer Dheeraj Rattan could save us from enduring a disaster.