When celebrities take to social media to air their sentiments, it can often put them in trouble too. 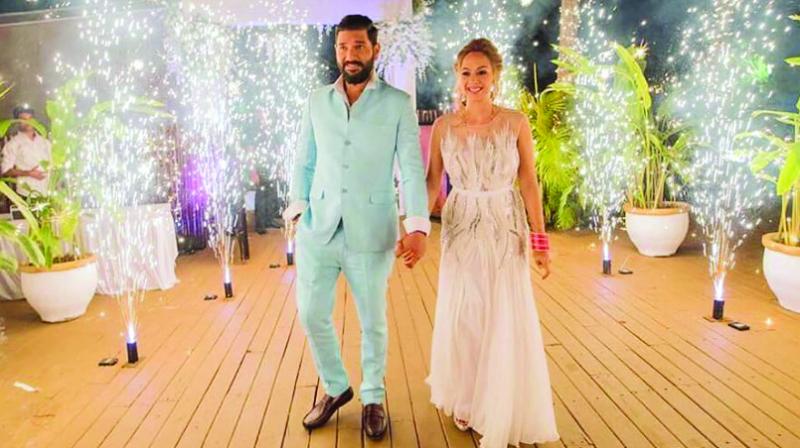 After tweeting that his followers should refrain from using firecrackers this Diwali, Yuvraj Singh was trolled for being a hypocrite for using them in his own wedding. (Photo: Twitter)

When celebrities voice their opinion on social media, they are often caught on the wrong side for their polarising point of view. But is this an open invitation for controversy?

With the growing presence of social media in the life of everyone — even celebrities — the breaking of a news story is always followed by reaction on Twitter, Facebook and Instagram. However, when celebrities take to social media to air their sentiments, it can often put them in trouble too.

This week, when the Supreme Court banned the sale of firecrackers in the Delhi-NCR region, celebrities were quick to take sides. While Chetan Bhagat was trolled for opposing the move, cricketer Yuvraj Singh supported it. And no sooner than he tweeted, trolls put up an image of the cricketer’s wedding where there were firecrackers on display. Anushka Sharma was trolled about going vegan, as her followers soon fished out a tweet raving about biryani.

What’s intriguing about Twitter comments is that while the celebrity could be tweeting with good intentions, the Internet never forgets their every move. Quite like Yuvraj, or Sonam Kapoor, who too was trolled with pictures of her bursting firecrackers last year, the hypocrisy lies bare for all to see. 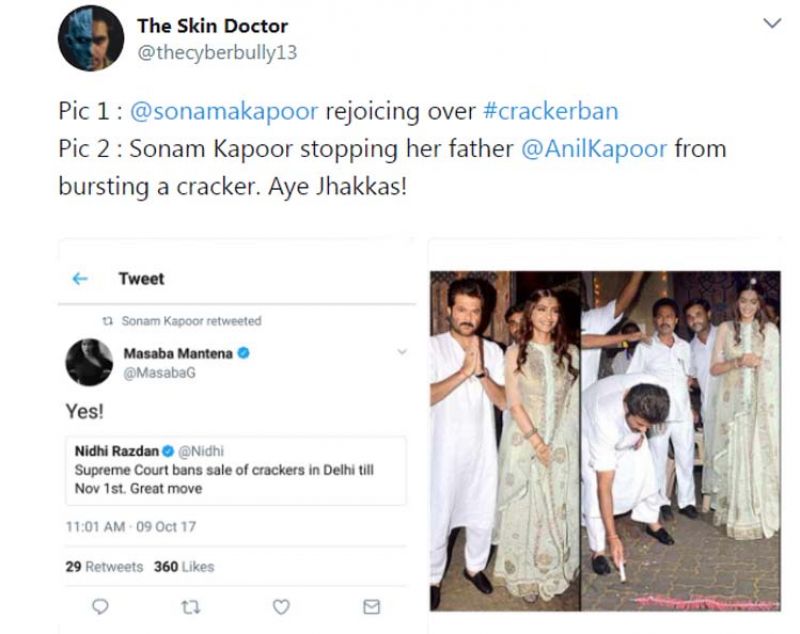 Sonam Kapoor was ecstatic when the SC decided to ban sale of crackers in Delhi. But in no time, her followers put up photos of the actress partaking in Diwali celebrations as her father went to on light cracker. (Photo: Twitter)

Filmmaker Vivek Agnihotri, who is vocal on Twitter himself, says, “Twitter is a platform to air your opinions, humour and ideas. However, it completely depends on the celebrity on how to use this platform. If a celebrity wants to avoid trolls, he should he’s being careful with his tweet and not being a hypocrite. In some cases, trolling on social media has proven to be good because they are exposing people who are hypocrites and making us aware of the truth.”

VJ Jose Covaco has a more pragmatic take on the issue, and hopes people will give the benefit of doubt to celebrities. “Look, people change, and so do their opinions,” he shrugs. “It is possible that these celebrities who once enjoyed firecrackers display may find it a bad idea today. So, I don’t know if celebrities are being hypocrites or their opinions have honestly changed. Maybe celebs should be clearer when they voice their views. They should mention about the transition of their thoughts and engage in discussions. Simply writing one line on Twitter is only going to confuse public and make them seem a hypocrite.”

But could it be possible that these are merely attention seeking stunts? Life coach and image consultant Chayya Momaya seems to think it’s possible. “Social media helps celebrities to find space to voice their opinions and grab attention. Today, people are not worried if they are being trolled or getting bad publicity,” she explains. “If they tweet about something, it gets trolled and if it becomes a controversy, they are fine with it. In fact, some celebrities purposely tweet something controversial to grab attention while some buy trolls to create a controversy to eventually get recognition and publicity. So first they create trolls, indulge in a controversy and then they become big.”

Whatever may be the case, such instances of trolling and foot-in-mouth syndrome can often take a toll on the celebrity’s image. And the people left behind to do the cleaning up are the publicists, who often get into damage control mode at the sign of slightest change in public mood.

A publicist, on the condition of anonymity, reveals what happens behind the scenes. “Issuing a statement to explain that the intention of the opinion was not to hurt sentiments always helps. We also strongly advice our clients to not retaliate, or indulge in what they call a “Twitter battle”. That further dilutes their brand. In some cases, we also advice them to ignore the trolling, as their silence also means that it is their opinion and nobody can contest that.”

Explaining how easy it is to misunderstand even a misplaced emoticon on social media, the publicist adds, “There is a vast difference in speaking out loud and speaking via social media. Words, punctuations and emoticons are often misconstrued, as the tone of the dialogue is not apparent on digital platforms. Even if it’s just a greeting for a festival, people often misinterpret it. So yes, sometimes we do advise them not to voice their opinions but that is only if the celebrity or brand in question is not comfortable with it. However, we do feel it’s unfair for trolls to curb one’s thoughts only because they are afraid. As a result, we also do boost our clients to voice their opinions as that too contributes immensely to build their brand and image. And in case of trolling, well that’s where we step in.”