Linguist behind the iron throne

We speak to david J peterson, The man behind the Dothraki and Valyrian languages on Game of Thrones. 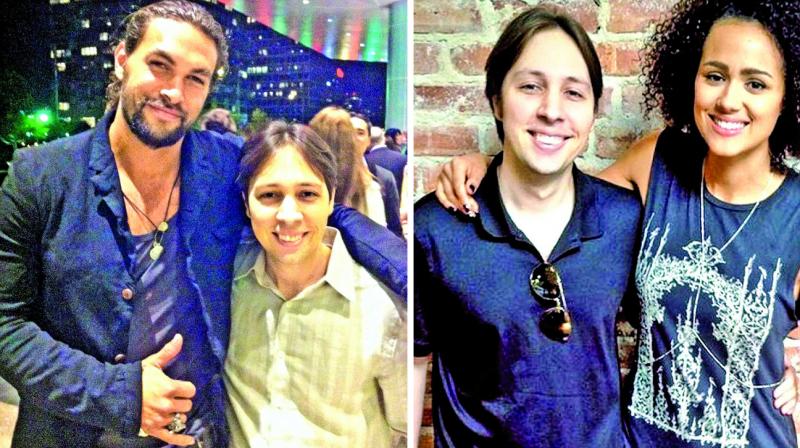 Any Game of Thrones fan would have tried (and terribly failed at) imitating the Dothraki and Valyrian dialogues — used in abundance on the show. Right from greeting other GoT geeks with ‘Valar Morghulis’, to whispering ‘Dracarys!’ to our pets, we’ve done it all — but have you ever wondered what went into the making of these languages?

David J Peterson, American linguist and fictional language creator, who is behind the languages spoken on the show, was recently in Tiruchy for a college event. We got in touch with him, and spoke about his love for the languages, India’s flair for languages and of course, the much-awaited seventh season of Game of Thrones!

“This was my second time in India; first time in the south — and both were to attend college functions. I was tremendously impressed by the industriousness and ability of the students I met. It makes me feel like I was lazy as an undergraduate!” David begins.

Creating new languages is just as intricate as the journey that real-life languages themselves have had over the centuries. “It can take anywhere from a few months to a few years to create a language. It depends on the conlanger and the task they’ve set themselves,” David begins to explain.

“In creating a naturalistic language, one has to take the time to develop the language at a very early state — and then gradually evolve the language over the centuries, changing the sounds, changing the meanings of words, and evolving the grammar to bring it to a modern state that looks very much like a modern language. It’s an intensive process, but a lot of fun.”

Many languages have references and influences of real languages, David explains, “Dothraki was predominantly influenced by the few snippets of Dothraki dialogue and words and names in the Song of Ice and Fire books written by George R. R. Martin. At all times, my goal was to match what was on the page. Grammatically, the result is much closer to a European language, like Russian or Latin, than anything else. The sound of it was influenced by my interpretation of how George R. R. Martin’s words would be pronounced.”

The way David goes about creating particular languages is interesting to hear, as not much of an input is given from the makers. They are not ‘language people’ after all.

“I ask them for background on the people (or beings) that are supposed to be speaking the language — as much as they’ll give me — and then I ask them for their impressions about how they think the language should sound. I take their suggestions and craft a sample that will show them the sound I’m thinking. They listen to the recording I send them and either tell me they approve, or they ask for some adjustments. Once we’ve settled on the sound of it, the rest is up to me,” he recalls.

Coming to India, David is in awe of the country and the many languages that we boast of — “I think India is a wonderful model of how a modern democracy can exist with many different languages. It always amazes and impresses me to see so many people (especially so many young people) with facility in two, three or even four or five languages. That’s the kind of world I want to live in — not one where everyone struggles to say “hello” and “how are you” in one other language, let alone two or three.”

The linguist is quite confident of picking up a few languages himself — “If I worked at it, of course I could pick them up! They’re just languages. No human language is beyond the reach of any human, no matter how old or young.”

More on the cast of Game of Thrones, David says almost every actor gets the fictional languages right, even as the bloopers show how much they struggle with it. “I think they all give a good effort. Jacob Anderson, who plays Grey Worm does it exceptionally well. He’s long been my favorite created-language performers. He’s absolutely astounding.”

Prod him on who his favourite character is, and David replies “My favorite GoT character is already dead: Tywin Lannister. He was amazing. As for who I want to see dead, probably the Mountain. That guy’s got it coming!”

Talking about Season 7, David says “This season, more than any other, I’m surprised by how many big, crucial things happen in each episode. With only seven episodes, it’s no wonder: there’s a lot of action to pack into such a small space.”

Although he is part of the world’s most famous TV show, David still maintains some anonymity, and not many greet him saying ‘Valar Morghulis’, surprisingly!  “The best part about having my job is pretty much no one knows what I look like. I ride my bike with my daughter around my neighbourhood all the time and no one has a clue who I am or what I do, and I like it like that,” he says, signing off.