In an exclusive chat, the actor spoke about the horror comedy, overexposing himself, Shah Rukh Khan and much more. 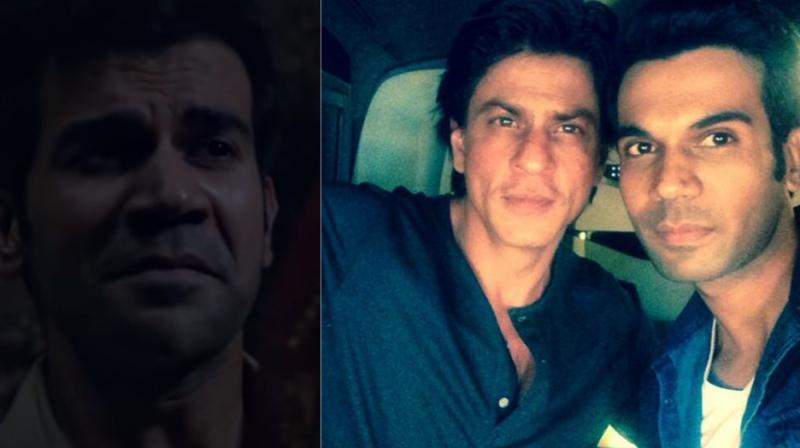 Rajkummar Rao is still from ‘Stree’ where he mimics Shah Rukh Khan.

Mumbai: A massive debate on nepotism is underway in Bollywood, but who says you can’t succeed if you’re not from a star family?

Rajkummar Rao is just the perfect example, proving how talent and resilience can never go unnoticed.

‘Stree’ is the actor's tenth venture in the last two years which have been filled with acclaim, awards and box office success galore.

In an exclusive chat, the actor spoke about the horror comedy, overexposing himself, Shah Rukh Khan and much more. Excerpts:

Tell us something about the film and your character.

The character name is Vicky, he is a tailor by profession. He’s born and brought up in this really small town Chanderi in Madhya Pradesh. That’s about him, of course, he’s got these two friends, played by Aparshakti Khurrana and Abhishek Banerjee, and they are very happy in their own world, but Vicky is aspirational, wants to go out of the city and make something out of his life. And then this whole fiasco happens in the town where this ‘Stree’ comes in, taking away men from the town, just leaving their clothes.

It’s the first time you’re working with Shraddha. How has been the experience?

It’s been wonderful. Shraddha is a really lovely girl, very hardworking, she’s done a great job in the film as well, and I think we just connected. It’s not like I’ve met her for the first time here, I know her since ‘Kai Po Che.’ We always shared this wish of working with each other, and I’m glad it happened with ‘Stree.’ I couldn’t have asked for a better script for us to come together.

I do believe every Mard goes through Dard. And for me, losing somebody who you love is painful. And there is a physical pain as well, in childhood, we’ve all been beaten up, we all have cried.

And the other tagline, ‘O Stree Kal Aana’, which woman would you say that to?

You started out with supporting roles before venturing as lead hero, so what do you have to say about the roles of Pankaj Tripathi, Aparshakti and others?

I think every character is important in every film, be it small, primary or lead because they are adding something to the story, taking it forward. And all these are very talented actors. When they come in, they bring in something new to the script, they add something of their own, which adds a lot and make a scene work better.

You’ve been working a lot with Dinesh Vijan. After ‘Raabta’, now ‘Stree’ and ‘Made in China’ opposite Mouni Roy. Are you the new blue-eyed boy of the production house?

(Laughs) He’s my new blue-eyed producer. He’s a friend, I think we connect really well. And he’s somebody I’m a big fan of as well in a way because he’s so passionate about films, just like myself. In ‘Stree’, I had a great time working with the whole team and Dinu, being the producer and one of the most important people. And now we are doing another film together, and I’m sure there will be a couple of more films in the future.

How comfortable were you in the scenes where you had to abuse?

(Laughs) Very comfortable. I grew up in Gurgaon, and it’s not like I’m hearing the words for the first time. It’s fine as long as it’s an important part of the script or scene, I have no apprehensions.

Do you anticipate any trouble from censor board because of it?

I don’t know, these guys (producers) are dealing with it.

I like both of them, and ‘Stree’ is that one unique combination where you can find both horror and comedy, though I feel it’s more on the comedy side. The scary parts are really scary, but it will make you laugh a lot.

And which are your favourites in both genres?

In the trailer (below), there is a scene where you are trying to mimic Shah Rukh Khan.

(Laughs) I was not trying to mimic SRK, you can think what you think, but I was just trying to show love. And for every small town boy, that’s the definition of love. We all have grown up watching Hindi romantic films, and when it comes to show love, that’s probably how we show it.

How good are you at mimicking actors?

I used to mimic a lot when I was growing up, watching films and mimicking actors. But I haven’t tried it in a very long time.

You did six films last year and ‘Bose: Dead or Alive.’ This year, ‘Stree’ is your third. Do you feel you are overexposing yourself?

No, I’m not overexposed because I’m not there, it’s my characters. And as long as I’m playing different characters in different stories and films, that’s fine. The day I start feeling I’m doing the same kind of films, I myself would get very bored of myself.

The film is clashing with ‘Yamla Pagla Deewana Phir Se’? How do you look at the box office?

I don’t really look at the box office, I look at the film. Good luck to all the films, it will rarely happen that you’ll get a solo release as there are so many films that we make and there are only 52 Fridays, so it’s bound to happen.

Which are your next releases?

After ‘Stree’, I have ‘Ek Ladki Ko Dekha to Aisa Laga’, early next year, February. Then ‘Mental Hai Kya?’ and I’m going to start shooting for ‘Made in China’ now.

Final thoughts, message to the audience, why should they should go and watch ‘Stree’?

Because I hope they have seen the trailer, and in case, they haven’t, I’d request them to go and watch the trailer. Then they can decide for themselves. For me, it’s a really cool film. I am very excited as an audience to watch it.

‘Stree’, directed by Amar Kaushik, hits the theatres on 31 August.