We would like to make TV shows, says Priyanka Chopra’s mother 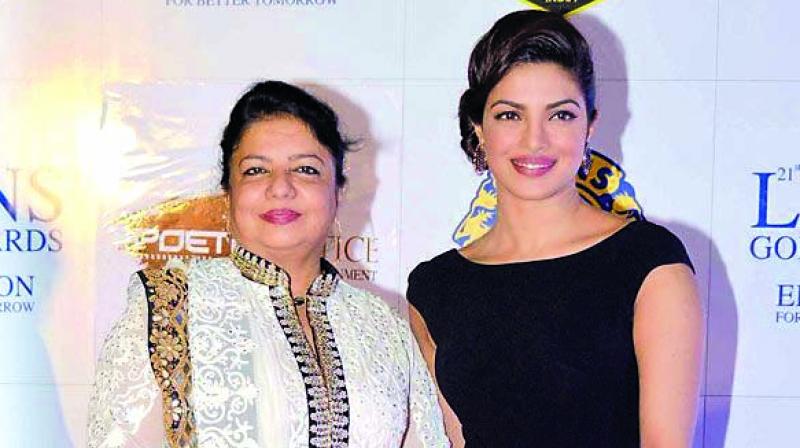 The parents of actors who belong to non-filmy backgrounds are in the spotlight only during award ceremonies or other special occasions. But Madhu Chopra, the famous gynaecologist, the mentor, motivator and business partner of her daughter actress Priyanka Chopra is always in the limelight. Now, coming up with their third home production under Purple Pebble Productions is the Punjabi movie Sarvann and Madhu Chopra spoke like a trade pundit.

“Learning is a never-ending process. And I am thankful that Priyanka chose to produce films. When she first shared the thought of doing something with filmmaking, I said she could take up direction. But to my surprise, she chose production. She wanted good stories to reach audiences, especially, films with cultural messages.”

One might be surprised hearing about her penchant for Indian culture as Priyanka has become an international star busy with American TV series Quantico and her international debut Baywatch. But Madhu says that her daughter has not been much affected by the global success. “It’s a matter of pride for me when I see Priyanka as a diva on the stage and the same little girl in her pyjamas at home. Even while staying in a foreign country, she receives a Bihari or a Punjabi from India with great regards, with a ‘Namaste’,” says Madhu.

Sarvann is their third regional film — the first two were in Bhojpuri and Marathi. “All our films have authentic subjects. Priyanka wants to promote new talent. We have been receiving lots of intelligent scripts. Our next is a Nepali film named Paua (Guest) and Priyanka  recently visited Guwahati for it. We have got a wonderful script and the actors too are from there. However, the actress will be from Bollywood.”

Madhu is excited that Sarvann is being screened along with Dangal. “It is a big thing for us. I haven’t met Aamir Khan, but Priyanka might have spoken to him.”

She also shared her plans about entering the  small screen with TV shows as well. “We are contemplating it. We want to start with Doordarshan which promotes stories with good messages,” she says.