I don’t think Anil can ever change: Madhuri

Missing in this huge ensemble is Sanjay Dutt, who was part of the last two instalments of the Dhamaal franchise. 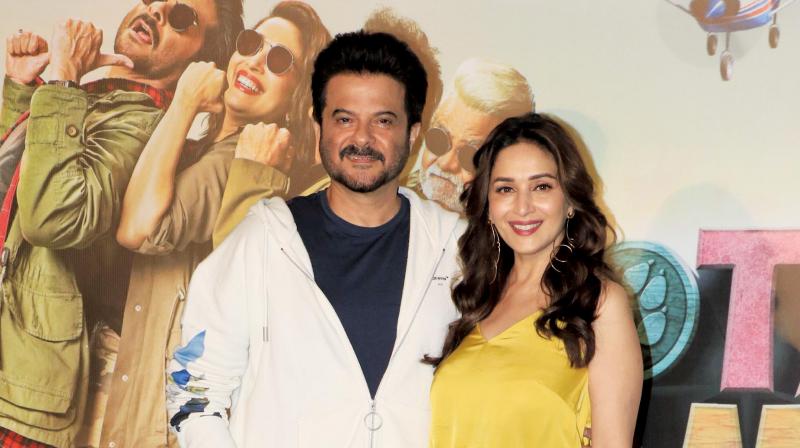 Actress Madhuri Dixit Nene, who had a reunion with her long-time co-star Anil Kapoor on the sets of upcoming adventure-comedy Total Dhamaal had a nostalgic ride shooting for the film.

“I don’t think Anil can ever change. He will always be the same. He is one of a kind. It’s always a pleasure working with him,” says Dixit who was last paired opposite Kapoor in Pukar (2000).

Together, the duo had once ruled the silver screen with hits like Tezaab (1988), Ram Lakhan (1989), Jamai Raja (1990), Beta (1992). Interestingly, it is also the reunion of Madhuri-Anil with their Beta director Indra Kumar. The trio had given a massive hit with the film faring well at the box office and winning five Filmfare Awards including Best Actor and Best Actress.

“This film is directed by Indra Kumarji, and I have not worked with him for a long time,” she says and adds that she liked the script instantly. “It is really funny. It gave me something different to do after a long time, so I just couldn’t say no to the film,” says Dixit while appreciating the star-cast which features Ajay Devgn, Riteish Deshmukh, Arshad Warsi, Javed Jaffrey, Sanjay Mishra, Johnny Lever, Boman Irani besides Madhuri-Anil.

Missing in this huge ensemble is Sanjay Dutt, who was part of the last two instalments of the Dhamaal franchise. Reacting to this, Director Kumar said, “It would have been a lot more fun if Sanjay Dutt had been there but his dates were not available. And, we both are unhappy that he couldn’t be a part of this film.”

The film with hit the silver screen on February 22.