Entertainment   Bollywood  15 Oct 2018  If anyone denies a working woman her space, he must be taught a lesson, says Lata Mangeshkar
Entertainment, Bollywood

If anyone denies a working woman her space, he must be taught a lesson, says Lata Mangeshkar

The Mangeshkar sisters are known to share a great rapport and are only two years apart from each other. 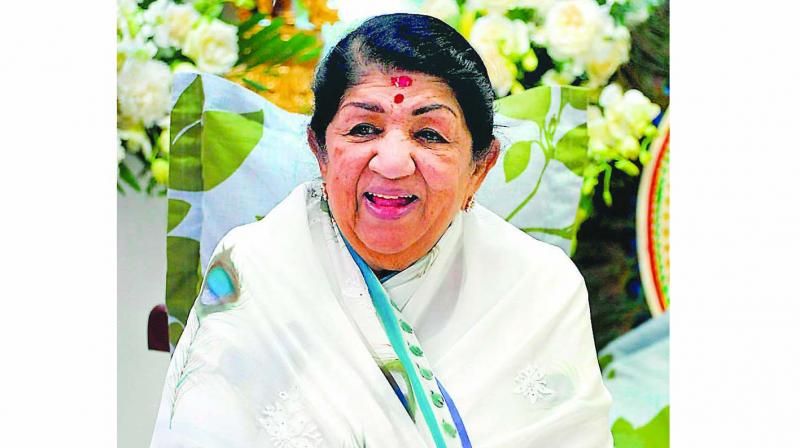 In a candid chat, the legendary playback singer Lata Mangeshkar speaks about her biography, Mothi Tichi Savli, and India’s Me Too movement.

It is difficult to chart the life of India’s most venerated playback singer Lata Mangeshkar and contain it between the pages of a book, yet in a fervent attempt, her sister Meena Khadikar pays homage to Lata Mangeshkar through the book Mothi Tichi Savli.

The 89-year-old singer is happy with the handiwork of Meena and says, “Who would know me better than my younger sister? She has been a part of my life almost from my birth” and rightly so. The Mangeshkar sisters are known to share a great rapport and are only two years apart from each other.

Mothi Tichi Savli has many undisclosed nuggets about the singer’s mysterious life, such as the chapter where Meenatai reveals Lata once threatened to cut a lyricist, Naqshab Jarchvi,  to size. The singer laughs as she harks back to the time, “Not exactly.  Woh bechare ab rahe nahin  (the poor chap is no more) but he had it coming. He was spreading rumors about him and me, which had no truth to it. I confronted him. When I was young I had a temper. No one could mess around with me and get away with it,” she quips.

There is certainly a lot to learn from the institution that is Lata Mangeshkar and while the Me Too movement has accelerated in India, this incident from the singer’s life finds resonance in the movement against sexual harassment today. She gives her word of advice to the women of India, “I truly believe a working woman must be given the dignity, respect and the space she deserves. If anyone denies her that space he must be taught a lesson,” she asserts.

Currently, the English version of the biography is underway and will be written by Meena’s daughter, Rachna. Subsequently, the sisters also plan on coming out with a Hindi version of the book and are thinking of roping in journalist Ambrish Mishra for the same.