Business   In Other News  20 Nov 2019  India's sugar output declines 64 pc till Nov 15 in ongoing marketing year
Business, In Other News 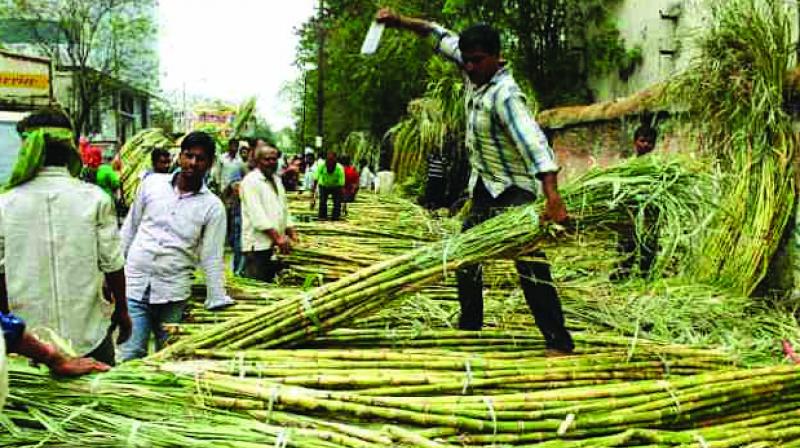 New Delhi: India's sugar production declined 64 per cent to 4.85 lakh tonnes till November 15 in the current marketing year that started last month as mills in Maharashtra have not yet begun their operations, industry body ISMA said on Wednesday.

It attributed the reason for fall in production to sugar mills in Maharashtra not yet starting their sugarcane crushing operation this season. The state had produced 6.31 lakh tonnes till November 15, 2018.

Production in Uttar Pradesh, however, increased to 2.93 lakh tonnes from 1.76 lakh tonnes.

Sugar output in Karnataka has fallen to 1.43 lakh tonnes from 3.60 lakh tonnes during the period under review as lesser number of mills have started operations so far.

"Maharashtra and Karnataka faced drought last year, because of which the area planted under sugarcane therein has dropped by about 30 per cent as compared to last season.

"With lower rainfall and water availability, the yields and recoveries would also be lower. Plus, the recent floods and extra rainfall have affected the crop further. The Maharashtra government has now decided to start the crushing of cane by the mills therein from November 22, 2019," ISMA said.

According to trade and port information, about 2 lakh tonnes of sugar have already been shipped out for exports. From market sources and information from sugar mills, it is learnt that contracts for another 12 lakh tonnes have been signed by the parties for exports, the statement said.

Last month, ISMA said the country's sugar output would fall 21.5 per cent to 26 million tonnes in the 2019-20 marketing year. It reported an opening stock of 14.58 million tonnes of sugar as on October 1.