Business   In Other News  07 Feb 2019  Firms seek higher duties as surplus steel lands in India
Business, In Other News

The ministry has given various indications that some measures might be taken, the sources added. 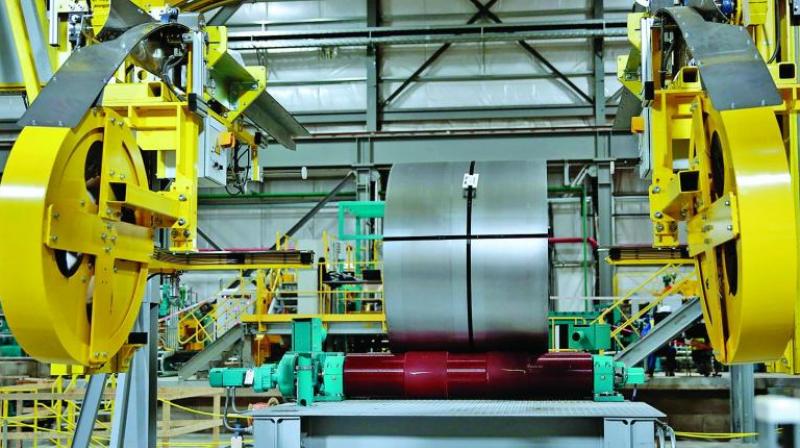 The WTO upheld Japan’s complaint in November but India is planning to appeal.

Local producers are suffering from the double whammy of a rise in cheap imports and low domestic steel prices, which threatens to wipeout the healthy profits made in the past couple of years.

The steel companies have approached the ministry multiple times over the past few months, alleging China, Japan, South Korea and Vietnam are dumping various grades of low-cost steel into the market and stealing market shares as a result, three government sources said.

India’s top four steelmakers - JSW Steel, Tata Steel, state-owned Steel Authority of India and Jindal Steel and Power - who together control over 45 per cent of country’s total steel production, are the key companies who have complained, the sources said.

The ministry has given various indications that some measures might be taken, the sources added. However, they are more likely to be non-tariff measures as India has already suffered defeat in a dispute with Japan at the World Trade Organisation (WTO) on charges that New Delhi unfairly imposed import duties in 2016 to safeguard its steel industry.

The WTO upheld Japan’s complaint in November but India is planning to appeal.

The steel ministry did not respond to a Reuters email seeking comment.

Imports of various grades of steel rose by around 8 per cent in the April-December 2018 period, compared with a year earlier, government data showed.

During the same period, exports fell by more than 17 per cent, making the country a net importer of steel, mainly because the US, one of India’s biggest markets, imposed additional duties last year on steel coming from some Asian countries, including India.

As a result, the nation’s steel imports from countries su ch as Japan, South Korea and Indonesia surged. Chinese imports also climbed in the final quarter of 2018, Indian companies say.

According to government figures, for the April-September 2018 period imports from South Korea rose 29 per cent from the year-earlier period, Japanese imports increased 35 per cent, and Indonesian imports by 106 per cent.

“The worry is imports,” said Seshagiri Rao, joint managing director at JSW Steel. He said the government had to “ensure that our borders are protected and goods will not come into India and hurt the domestic steel industry.”