According to the Indian goverment, US is one of the top five destinations for investments from India. 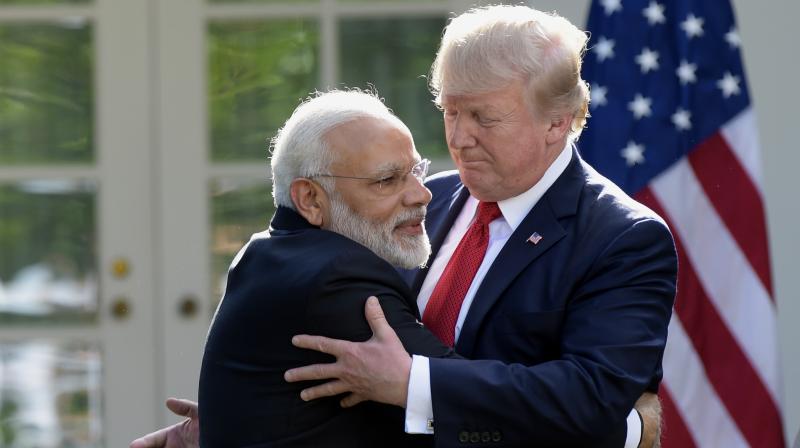 Washington: Prime Minister Narendra Modi and President Donald Trump today agreed to strengthen the Indo-US economic partnership in a way that results in a win-win for the two major economies, while amicably working on resolving differences.

"On the economic side, the two sides had very productive discussions. The economic changes in both countries are creating new demands and once you have the high-level comfort between India and the US, the other partner is well placed to meet those demands," Foreign Secretary S Jaishankar told reporters after Modi held his maiden meeting with Trump here at the White House.

Jaishankar cited the civil aviation market and natural gas as areas of cooperation and added that from the next year the Liquefied natural gas (LNG) from the US will start flowing to India.

Expect in the next many years the Indo-US LNG trade will be in excess of USD 40 billion, he said. Jaishankar said there was a sense that both countries should encourage each other in the effort to be the natural and preferred partner on such issues.

"There was a discussion on trade matters, market access, regulatory issues and barriers. Both leaders underlined the importance of free and fair trade," said Jaishankar.

Responding to a question on H-1B visa-related issues, Jaishankar said there was a discussion on cooperation in innovation and digital partnership.

"On the H-1B issue, there was a lot of discussion with business leaders and the two leaders about the digital partnership," he said.

"There is recognition that the Indian-American community has played an extraordinary role in building this relationship. When you value something, it is obvious that you will take care of what you value," Jaishankar said.

According to a India-US joint statement, Modi and Trump committed that the two countries -- leading engines of growth in the global economy -- should intensify their economic cooperation to make their nations stronger and their citizens more prosperous.

Noting that extensive economic and tax reforms launched in their respective countries will unlock immense economic opportunities for both countries, they committed to further expanding and balancing the trade relationship and to removing obstacles to growth and jobs creation.

The two leaders also resolved to pursue increased commercial engagement in a manner that advances the principles of free and fair trade, the statement said.

"To this end, the United States and India plan to undertake a comprehensive review of trade relations with the goal of expediting regulatory processes; ensuring that technology and innovation are appropriately fostered, valued, and protected; and increasing market access in areas such as agriculture, information technology, and manufactured goods and services," the statement said.

Trump and Modi further committed to strengthening cooperation to address excess capacity in industrial sectors. They called on their teams to find creative ways to improve bilateral trade.

According to a White House fact sheet, two-way trade in goods and services reached USD 114 billion in 2016. With the Indian economy growing at seven per cent annually, both countries are committed to further expanding and balancing the trade relationship.

Earlier in his remarks to the press, Trump said he looks forward to working with Modi to create jobs in the two countries, to grow their economies and to create a trading relationship that is fair and reciprocal.

"It is important that barriers be removed to the export of US goods into your markets, and that we reduce our trade deficit with your country. I was pleased to learn about an Indian Airlines recent order of 100 new American planes, one of the largest order of it is kind, which will support thousands and thousands of American jobs," Trump said.

"We're also looking forward to exporting more American energy to India as your economy grows, including major long- term contracts to purchase American natural gas, which are right now being negotiated, and we will sign them. Trying to get the price up a little bit," he said.

"India has the fastest growing economy in the world. We hope we're going to be catching you very soon in terms of percentage increase, I have to tell you that. We're working on it," he said as he praised the GST reform.

"In just two weeks, you will begin to implement the largest tax overhaul in your country's history. We're doing that also, by the way. Creating great new opportunities for your citizens. You have a big vision for improving infrastructure, and you are fighting government corruption, which is always a grave threat to democracy," Trump said.

Together, the US and India can help chart an optimistic path into the future, one that unleashes the power of new technology, new infrastructure and the enthusiasm and excitement of very hard-working and very dynamic people, he said.

Modi said for both countries increased productivity, growth, job creation, and breakthrough technologies -- an engagement towards all these are, and will remain, strong drivers of their cooperation, and will give further momentum to their relationship.

"We consider the USA as our primary partner for India's social and economic transformation in all our flagship programmes and schemes. I am sure that the convergence between my vision for a 'new India' and President Trump's vision for 'Making America Great Again' will add new dimensions to our cooperation," Modi said.

"I am very clear about the fact that India's interests lie in a strong, and prosperous, and successful America. In the same way, India's development and its growing role at the international level are in the USA's interest," he said.

"One of our common priorities will be the development of trade, commerce, and investment links. And in this regard, in the technology, innovation, and knowledge-economy sectors, the expansion and deepening of cooperation is also among our priorities. Towards this end, we shall take steps to further strengthen our successful digital partnership," Modi said.

The White House said the US and India, both signatories to the World Trade Organisation's Trade Facilitation Agreement (TFA) are working together to implement the TFA's provisions and help lower the cost of trade for both the countries.

According to the Indian government, the United States is one of the top five destinations for investments from India. The US Bureau of Economic Analysis reports that Indian companies have invested over USD 11 billion in the United States economy, creating and sustaining more than 52,000 jobs.