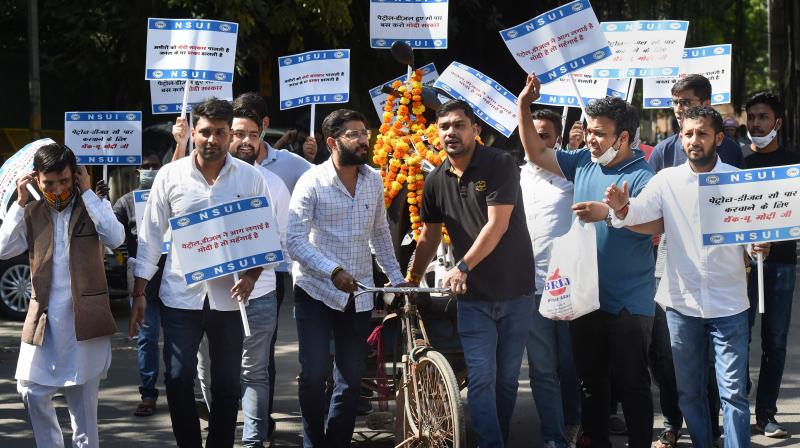 NSUI members stage a protest at a petrol pump over hike in the petrol and diesel prices in New Delhi. (Photo: PTI)

New Delhi: Petrol and diesel prices witnessed a hike for the fifth consecutive day across the country on Sunday.

Mumbai also reported a surge in fuel prices as compared to yesterday. Petrol witnesses a hike of Rs 0.34 and costs Rs Rs 113.46 per litre, while diesel rates sored by Rs 0.38 amounting to Rs Rs 104.38.

The rising fuel prices in the country are not going to come down immediately. The central government is in talks with several oil-exporting countries on the issue of supply and demand of oils but there is no possibility of immediate relief in prices.

On Monday, a source told ANI that the Ministry of Petroleum and Natural Gas recently raised concerns about the matter of pricing, supply and demand of oils to the major oil-producing countries.

"As crude oil prices rise internationally, the petroleum ministry has called on the energy ministries of many countries such as Saudi Arabia, Kuwait, UAE, Russia and others," the source told ANI.