According to analysts at Angel Broking, the markets are pricing in a 76 per cent chance of US Fed raising borrowing costs in December. 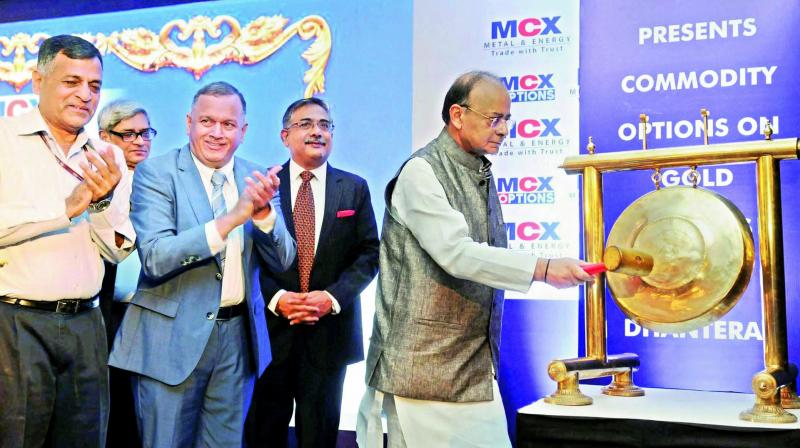 Union minister for finance and corporate affairs Arun Jaitley strikes the gong at the launch of the commodity options on gold futures in New Delhi on Tuesday. (Photo: PTI)

Mumbai: After gaining about 13 per cent in 2017 till date, the prices of gold is expected to witness some correction in the coming months due to the likelihood of an interest rate hike by the US Federal Reserve in December.

Since, one third of gold sales in the domestic market happen during the last quarter, bullion experts feel that consumers should purchase gold in a staggered manner at every dip in prices.

According to analysts at Angel Broking, the markets are pricing in a 76 per cent chance of US Fed raising borrowing costs in December, compared with less than 20 per cent only a month ago. Hence, correction in gold prices is due at this point, which in turn makes the case to buy gold on dips rather than buying at current market price of around Rs 30,000 per 10 gram.

Typically, the quarter ending in December accounts for about a third of India’s gold sales, since it includes the start of the wedding season and festivals such as Dhanteras and Diwali, when buying gold is considered auspicious.

“For those who allure to hold the physical metal, our advice is to accumulate on every dip rather than concentrating all the purchases at one go and take the benefit of value-cost averaging,” Angel Broking said.

The dollar index has dropped 9.5 per cent in 2017 till date and the inverse relation between dollar and commodities along with the geo-political tension had kept the prices of the yellow metal at elevated levels.

However, the brokerage house believes that the host of economic data sets released in the US in recent times indicate that the dollar Index might possibly change its direction from weakness to strength, which could halt the pace at which gold prices rise.