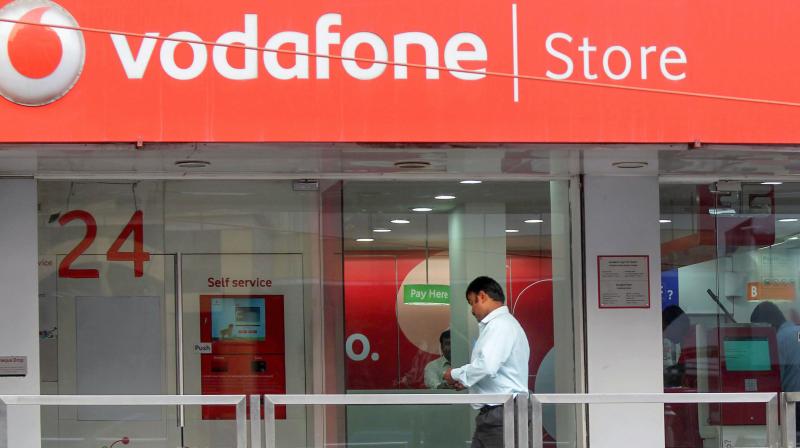 In this Jan. 20, 2012 file photo, a visitor walks in a Vodafone store in Bangalore. Vodafone Idea is in trouble over its payments to the Department of Telecom. (PTI)

New Delhi: Amid talk of the government encashing its bank guarantee over default in payment of dues, Vodafone Idea chairman Kumar Mangalam Birla met Union telecom secretary Anshu Prakash on Tuesday as he looked for options to keep the company afloat.

After the meeting, Kumar Mangalam Birla said he “cannot say anything at the moment.”

Vodafone Idea on Monday paid Rs 2,500 crore to the Department of Telecom (DoT) and promised to pay another Rs 1,000 crore before the end of the week.

But the amount paid is less than 5 per cent of the dues that DoT estimates the company owes to the government following a Supreme Court ruling that asked for including non-telecom revenues of telecom companies in computing statutory payments such as licence fee and spectrum charges.

The Supreme Court on Monday refused to stop DoT from taking any coercive steps for recovery of dues from Vodafone Idea.

In December, Birla had said Vodafone Idea may have to shut if there is no relief on the statutory dues. “If we are not getting anything, then I think it is the end of the story for Vodafone Idea,” he had said. “It does not make sense to put good money after bad... We will shut shop.”

Shares of Vodafone Idea on Tuesday tanked over 16 per cent due to a rating downgrade by CARE Ratings.

The downgrade is on account of “significant erosion” in the overall risk profile of the company in the wake of absence of relief on modification plea relating to AGR dues on February 14.