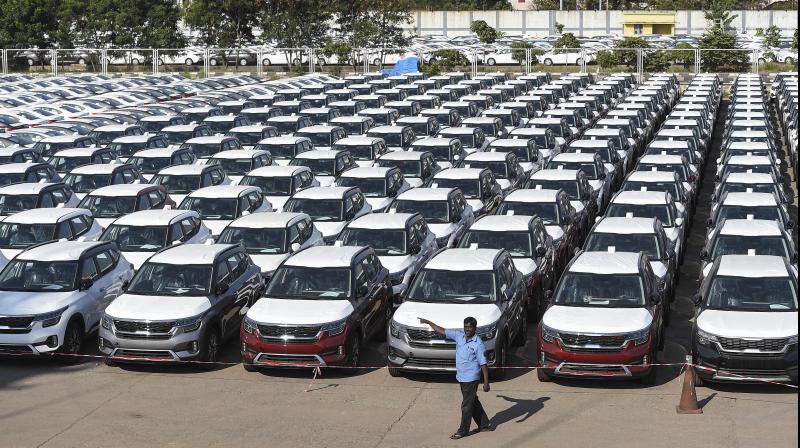 Delhi: The government of Thursday sought suggestions on methods of resource mobilisation from captains of the automobile industry. (PTI Photo)

New Delhi: The government sought suggestions on methods of resource mobilisation from captains of the automobile industry, who raised several demands for a financial package to overcome the impact of the COVID-19-induced lockdown.

During a video conference with leaders of the auto industry, Heavy Industries and Public Enterprises Minister Prakash Javadekar asserted the government's support to the sector saying it has to be brought back "on the wheels" again considering its significance to the Indian economy.

"This industry is very important for India and we have to bring it back on the wheels," Javadekar said after the video conference with the industry leaders.

He acknowledged the significance of the auto industry highlighting its contribution to India's GDP and overall manufacturing, besides being "a mass employment generator" and its role in exports from the country.

"Now, we have to concentrate on livelihood and that is what we discussed today (Thursday) and we discussed so many things. I also suggested them on how to raise resources, how to mobilise resources because putting up demand is one part of the story but suggesting various methods of resource mobilisation is also important and, therefore, it was a fruitful meeting and we are happy with it," the minister said.

Acknowledging the hardships the auto industry has gone through, he said that last year, this industry suffered because of a planned migration from BS-IV to BS-VI with customers postponing purchases.

"So, overall, there were many discussions and demands of GST cuts, employment support, retail sales support, supplier support and liquidity support. So, naturally, what the industry has gone through, they have put up demand," he said.

The minister added that the industry leaders also suggested online registration of new vehicles, along with batch testing for factory workers before re-joining work, physical separators between two workers and sanitisation of selling points, among others.

Industry sources said they sought opening of dealerships and back-end activities to have seamless operations.

The industry captains also sought liquidity support to component makers and dealerships. They also demanded policy steps for revival of demand in the sector.