The similarities between President Bolsanoro and his American counterpart are extraordinary. 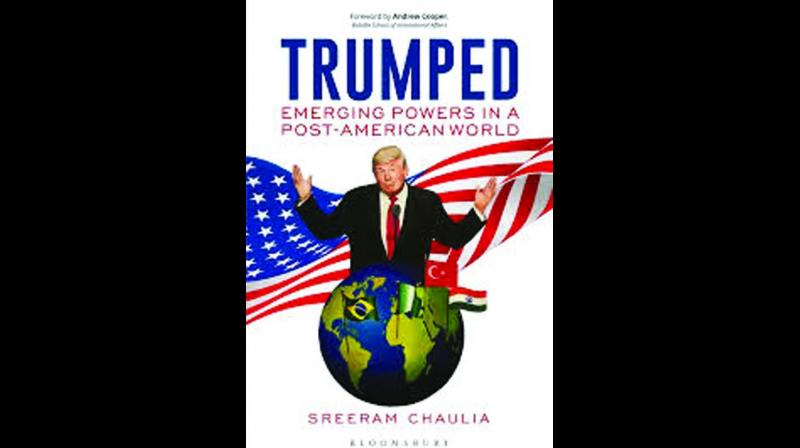 The similarities between President Bolsanoro and his American counterpart are extraordinary. The Brazilian leader revels in the moniker Trump of the Tropics and Trump’s National Security Advisor John Bolton has returned the compliment with the quip, ‘Up here, maybe we’ll call President Trump the Bolsanoro of North America,’” writes Professor Sreeram Chaulia in his recently-published Trumped: Emerging Powers in a Post-American World. Prof. Chaulia, dean of the School of International Affairs at O.P. Jindal Global University, further elaborating upon the parallels between the two North and South American leaders, adds, “Like his idol Donald Trump, Bolsanoro overcame the centrist of political mainstream and surged to power by exploiting a crisis of democracy and capitalism that pushed Brazilian voters to embrace his extremism and anti-elitist radicalism.” (p148)

Brazil, along with India, Turkey and Nigeria, are the countries among the “Rest” that Prof. Chaulia discusses at length in the book to argue that Trump has provided an opportunity to emerging powers to rise up and fill the geopolitical vacuum amid a US retreat. Interestingly, since the publication of this book, while Bolton, sacked through a tweet, no longer remains the NSA, Bolsanoro attended India’s Republic Day parade as chief guest a year since Trump declined the invitation for the same in 2019 citing domestic scheduling issues. New Delhi is hoping to host Trump some time end of February, for the first time since he moved into White House after the 2016 elections described by strategic experts often as a Black Swan event.

The author discusses the confrontational chaos between Trump and Turkey’s Recep Tayyip Erdogan stemming among others from the DC approach to Tehran, leading to a new geopolitical axis in the Middle East with Moscow in a key role. He charts the way the far right populist Jair Bolsonaro has managed a 360-degree turn for Brazil from the socialist Lula’s wariness of American hegemony to becoming close partners with a temperamental bullying Trump. In Nigeria’s context, Chaulia presents insights into the opportunity for President Muhammadu Buhari to push for his country’s increased leadership in West Africa. But he cites the 2016 economic recession when oil prices collapsed, continued threat posed by terrorist organisation Boko Haram and US withdrawal from West African security efforts leaving the G5 Sahel — Burkina Faso, Mali, Niger, Chad, and Mauritania — to shoulder greater responsibilities as obstacles to Buhari’s leadership blueprint mired in domestic crises. The countries cited to illustrate the author’s argu
ments are large economies that should have benefited if the international institutional architecture that evolved post 1945 were equitable in nature.

Interestingly, the book debates whether or not the emerging powers can steer clear of bandwagoning either with the US or the elephant in the room, China, to build a new multipolar world order. Or will Trump’s frequent insults and threats for allies and partners sharply deteriorate an existing balance of power? It takes a close look at the rise of an aggressive China, its trade and investment expansion through the BRI (Belt and Road Initiative) to its military modernisation. Perhaps a chapter on the Trump-Xi strongmen saga through the lens of China’s own internal economic sustainability challenges and trepidation around BRI impacting the DC-Beijing narrative would have enriched the read further. “I think it is not India’s way to be a disruptionist power internationally, I think we should be a stabilising power. There are already enough forces of disruption in the world. Somebody needs to make up a bit... It is also not the India way to be self-centred, to be mercantilist. Therefore, it’s important to be global, law abiding, consultative,” said external affairs minister S. Jaishankar at the annual global think tank Raisina Dialogue recently. Jaishankar in the last edition of the dialogue organised by his ministry had included the rise of China and choices, posture and behaviour of the US among the biggest global disruptions.

It is timely then that the author gives a detailed attention in the book to the India story of strategic neglect to strategic assertion, the transition from India-US being “estranged democracies” to “natural allies”, the Modi-Obama to Modi-Trump era and recalibration with China and Russia as New Delhi faced its moment of truth and realised Trump’s lack of commitment starting with the Doklam crisis in 2017 to Pakistan sponsored terrorism. But when the US chooses to withdraw from Afghanistan, can India with its No-Boots-On-Ground principled position actually emerge to be the key player on the South and Central Asian chessboard? Will these non-western powers, given their own domestic and resource limitations and tests of democracies, have the wherewithal to rise to the responsibilities amid increasing Chinese heft? Will multilateral arrangements like BRICS, IBSA, ASEAN, SCO pave way for a more equitable, liberal global governance even as Trump trumpets the America First Movement and paints the liberal world order as a villain?

The book presents a compelling argument that there is window of opportunity for non-Western nations to take a lead with an isolationist US, but stops short of discussing how or recommending specific ideas. But it is a timely, scholarly and yet easy-to-read work that is an important sequel in many ways to the post-American world where Trump, whether he is scathed by or emerges stronger from his impeachment, has disrupted the world order, offline and online.

Smita Sharma is an award-winning journalist