An insight into chronicles of RAW & ISI spy games

This is not the recording of a scholarly seminar, nor the minutes of a dreary conference of high officials. 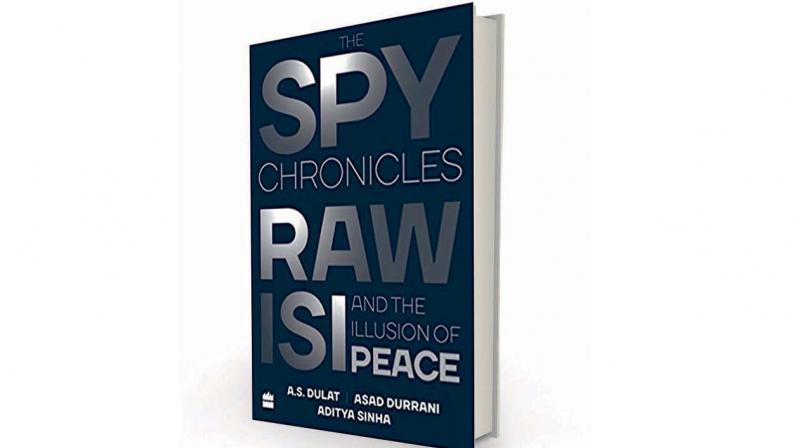 This book is devised in the form of extensive dialogues on relations between India and Pakistan, as seen in the handling by these countries of the extremely sensitive issues of Kashmir, Balochistan and Afghanistan.

As such, critical questions are touched upon — insurgency, liberation, terrorism, the application of military force and the role of intelligence agencies, the deftness or otherwise of the use of state power, the negative power of bureaucracies, and the personality, acceptability, and ideology of the Prime Minister in each country — since Morarji Desai in India and Zulfiqar Bhutto in Pakistan.

An automatic interest in these themes is aroused by the very title of the volume. The interest is further enhanced by the fact that the dialogue partners once headed India’s external intelligence agency RAW and Pakistan’s ISI, frequently imagined as that country’s Deep State which controls everything that moves.

The authors, A.S. Dulat and Lt. General (retd) Asad Durrani, served as chiefs of their respective agencies 10 years apart and were not principal intelligence antagonists as heads of their respective services. Thus, the conversation here is not between John Le Carre’s George Smiley and Karla, the genius of a spy chief on the other side of the Iron Curtain, who Smiley plotted to outdo for years, including briefly as chief of the Circus (Britain’s MI6).

Nevertheless, the issues dealt with here remain “live”, and are of high volatility and great public interest. If that weren’t so, the book will be of interest chiefly to historians. The manner of the conversation here suggests that the participants are well versed with the subjects they deal with even after their retirement, even in the  particulars.

While no operational secrets are spilled, the former spy chiefs from adversarial countries offer striking perspectives from their own time in office, and also guide the reader into plausible or most likely causes and explanations of what’s up today.

In this they have doubtless been aided by high contacts in their respective countries. Aditya Sinha, the third author here, is a senior journalist who evidently designed for himself the role of facilitator through appropriate questions and interventions that steer the conversation between the spymasters.

From the readers’ point of view, the authors have managed to sharpen the interest quotient by speaking quite frankly on leading public figures, military personalities, as well as the spy services personnel on both sides.

Among the politicians, Vajpayee comes in for very positive appraisal while Modi, the Bhuttos, Zardari and Sharief fall short in the authors’ estimation, particularly the Pakistani leaders in Gen. Durrani’s. The tenures of Pakistan’s military dictators have not been dissected in the same way.

Extremely frank estimates are also offered of some CIA chiefs and of the US approach generally for South and West Asia. Issues such as India’s surgical strike, the Kulbhushan Jadhav case, the failed Agra talks and the changing matrix in Afghanistan has been placed under the lens with insight.

Regrettably, the role of the Pakistan military in taking over Pakistan, and the impact of this on Kashmir, is glossed over. Gen. Durrani says laconically that if the State in Pakistan had not intervened, other non-state actors would have filled the breach. This is frightening, but simplistic.

Questions are raised whether Prime Minister Narendra Modi has a Pakistan policy, and whether any forward movement may be expected in Kashmir at all in the current period. Gen. Durrani, incidentally, suggests that Pakistan blaming Indian consulates in Afghanistan for stoking the fires in Balochistan is going too far.

Dulat and Durrani both seem to think that making former J&K chief minister Farooq Abdullah the Centre’s interlocutor for Kashmir on Pakistan’s recommendation may be a great idea.

Dulat, evidently, enjoys his Le Carre and at one point quotes from A Legacy of Spies to suggest that spooks as a rule do not “invest in trust”. Well, in this case, they are almost urging us to give trust a chance. Perhaps this is because both Dulat and Durrani are “honourable schoolboys”.

They are realists. They know how the system works. They know what the prejudices of history are. Dulat, therefore, only goes so far as to suggest skirting mechanisms and advocates glasnost — a greater openness of interaction, including making the intelligence station chief’s position in New Delhi and Islamabad “open” postings. The hope is that glasnost will help sticky processes, including Kashmir evolve freely.

Durrani proposes structuring institutions to carry on mutual interactions through the highs and the lows; thus, he believes, there need not be favourites of Prime Ministers running back-channel conversations to aid decision-makers or advance preferred agendas.

In a sense, these former spy chiefs have a progressive worldview insofar as interactions among nations go. In the Introduction, beautiful lines are etched from the writer Saadat Hasan Manto: Pointing to the horizon where the sea and sky are joined, he says, “It is only an illusion because they can’t really meet, but isn’t it beautiful, this union which isn’t really there.”

Kashmir, Pakistan, and Afghanistan practitioners — the security community, the diplomats, the journalists, and thinking politicians who have had a part to play — should enjoy the nuances explored here, even if they prefer their own assessments. For general readers, a new world can open.

The idea in the book seems to be to not go into genesis or national justifications of the historical contours, but to offer insights that may be cited in favour of cooperative endeavour in dealing with present-day complexities. This reviewer found the last third of the volume to be of considerable interest while a good deal of the early part was not bang for the buck.

This is not the recording of a scholarly seminar, nor the minutes of a dreary conference of high officials. To say the least, we have an unusual volume here where extremely well informed individuals have spoken with ease. Perhaps military men and politicians should follow what’s written in the book in the interest of a calmer future.