Anurag Tripathi’s new and explosive book chronicles his search for the truth behind the man once touted to be God. 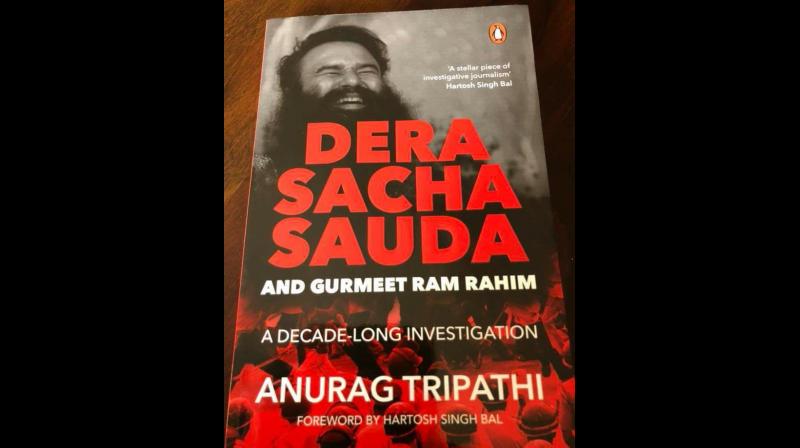 With strong political back up and loyalists in police, Dera Sacha Sauda Chief Gurmeet Ram Rahim Singh continued his crimes under the sheets for over two decades without fearing arrest.

The self styled godman who was worshipped by millions, Ram Rahim used to call his women followers to his guffa (cave) for them to wash off their sins and devote themselves completely to God by raping them.

Anurag Tripathi’s new and explosive book Dera Sacha Sauda And Gurmeet Ram Rahim, chronicles their search for the truth behind the man once touted to be God.

For years Gurmeet Ram Rahim Singh Insaan had blind followers till the CBI court in Panchkula sentenced him to 20 years in prison on August 28, 2017.

A leader of quasi-religious sect, a music producer, singer-songwriter, actor, and filmmaker, Gurmeet Ram Rahim Singh became the talk of the country, with media covering extensively the charge slapped on him for raping his female followers. Ram Rahim’s acolytes went on a rampage soon after the court’s sentencing and riot was declared in some of the northern states.

But this wasn’t Ram Rahim’s first conviction, it’s just the most recent and came to the fore and subsequently broadcast.

The book is a thorough journalistic investigation into the reported criminal activities at the Dera by its chief Gurmeet Ram Rahim.

Author of the book, Anurag Tripathi, an investigative journalist with sixteen years of experience across all media has dug into the details of the Dera chief’s mischief and crimes.

Tripathi, who was part of Tehelka in 2007, a magazine known for its investigations and sting operations, narrates unnerving stories which are still unknown to many.

Tripathi begins by narrating the start of Tehelka’s investigation, in 2007 - five years after the CBI had launched its own investigation when an anonymous phone call changed their lives forever.

Written in a lucid manner, the book, which is not unlike a racy thriller (only here the incidents and plot line are very real) jumps straight into the murky world of Gurmeet Ram Rahim.

The book is stark in its description and easily weaves the reader into the narrative as they journey along with the narrator in search for truth.

Anonymous tips, suspicious meetings, lives at risks, last-minute turnarounds, undercover identities, frantic trips, sleepless nights, are only some of the things that the author makes use of to keep readers glued to the book.

The book, an engrossing read, sees Tripathi expertly, layer by layer, unmask the man at the centre of it all.

From forced castration to rape and murder, Ram Rahim Singh, has been a monster in name of godman.

The book further records how Ram Rahim was involved in murders, private militias, illegal trade in arms and opium, and land grab at an untold scale.

Though Ram Rahim was arrested in 2017, the book starts in 2007 with the investigations from then and the struggle it was to convict someone so powerful.

Frightening at times in its portrayal of the harsh reality which surrounds us, Tripathi’s journey, written in the book is no only about his grit and determination (like a Arthurian hero at times) but also about the corrupt practices that have come to entwine India and the difficulty in unravelling the webs of deceit it has created.