Author shares more about his book and reveals why is it a juicy Indian thriller with elements of Bollywood, politics and a hot damsel. 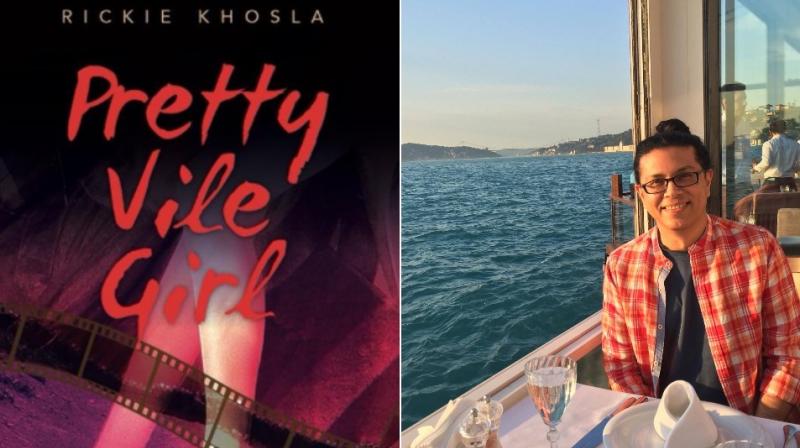 I have written it to be a compulsive page turner, and I do hope that I have succeeded in doing that, reveals author Rickie Khosla.

An out-an-out whodunit, Rickie Khosla’s debut novel Pretty Vile Girl ticks all the right boxes. Dreams, innocence tragedy, love, deceit, and of course, murder, or rather, a slew of murders leave readers reeling in a gripping, tightly written novel that unfurls around its protagonist Jazmine.

Beautiful, talented and good-looking, Jazmeen is Bollywood's most in-demand starlet, and in a relationship with to one of the country's most powerful politicians. Unpredictable at best and extremely candid in interviews, no one could guess at the dark secret she's carried for years. What starts of as a journey in sorrow takes a turn towards the sinister as Jazmine discovers herself in murder and might and what unfurls is nothing short of a spectacular read.

But readers will have to await the very end, when things again take a turn, but is it for better, or for worse?

In conversation with this correspondent, first time author Rickie Khosla shares more about the book.

What was the premise for your book?

I wanted to write out-and-out, unapologetic, no-holds-barred pop fiction. It had to be a thriller, because that is the genre I like to read. It had to be desi, racy and pacey, because what’s a thriller if it isn’t all that, right! And the best pop elements in a juicy Indian thriller have got to be Bollywood and politics! This book is, hopefully, a melange of all of that.

Take us a bit through the process of writing Pretty Vile Girl.

I have wanted to write for a long time, but never seemed to be able to find the time for it. So, I took a long sabbatical from my professional career to write. In the beginning, a novel was not even on my mind. I first started with a blog on general every day musings, political commentary, Bollywood spoofs and funny anecdotes and observations. Then I wrote some short stories which were quite well received by my blog readers. Then I wrote a novella, The Imperative.

After writing that I felt ready to take on a book ‘project’ and once I was convinced I was ready to make that commitment, I jumped into PVG all guns blazing! It took me about nine months to complete the first draft of the manuscript. Nine months – it was like giving birth to a baby!

Why is the protagonist such a diabolical character?

I don’t want to confirm or deny whether I agree with your statement – that she is a diabolical character! But yes, she is a character, all right! Very clear in what she wants. I think it is that certainty, mixed with her lack of remorse about her decisions, which might compel some to see her as diabolical.

Who are your inspirations when it comes to literature? Why?

My A to Z of literature revolves around Pop fiction, thrillers, historical fiction, murder mysteries! It needs to be fast paced. And it definitely needs to be well written. When my editor and I first discussed this book, she asked me what the inspiration was for this book. I said it was Sidney Sheldon, whose books I used to read growing up. She shook her head and said – ‘And you ended up writing a Jackie Collins?’ That was amusing! I have never even read a Jackie Collins but I know what genre that is. And, hey, I am more than flattered by the comparison!

Wouldn’t that be awesome! I didn’t conceive the book with a movie fate on my mind, but the book is very visual and episodic, most definitely. Maybe a TV serial then? Is Ekta Kapoor listening? You know, there was a very interesting panel discussion on film writing where Karan Johan had said that Hindi film writing is very tricky because the story needs to have two climaxes. The end, obviously, but also one just before the interval. Your story needs to surge and then…pause…for popcorn and hotdogs! This situation is very unique to India. And, would you believe it, my book has 2 climaxes too! So I must definitely pitch this story to KJo!

Don’t know who to recommend to to play the characters, though. Frankly, everyone these days is so talented!

What kind of a book would you say PVG is? I call it – a racy, pacey and desi thriller! It’s a tale of Lust and Lovers, Schemes and Plotters, Power and Players, and of Betrayals and Avengers. I have written it to be a compulsive page turner, and I do hope that I have succeeded in doing that.

How difficult or easy was it in imagining the character of the protagonist?

I don’t think the main character Jazmeen was difficult to imagine. What was tough was to keep the balance between keeping her real and still keeping her a bit larger than life. And also keeping her just enough dark so that she stays compelling but doesn’t become loathsome. I also didn’t want to cloud the reader with any of my own judgments on her.

What kind of research did you do for it?

Nothing! This book is entirely fiction, so please don’t go looking for similarities between my characters and people you may know in real life.

The protagonist, dons a lot of masks throughout the book, and yet, you reign her in. Why?

Good question. You know, like I was saying earlier, it was important for Jazmeen to be in that sweet spot between being larger than life and also being real at the same time. I feel the story may have been too ‘out there’ had I let her fly totally free. Moreover, I did have a reason to rein her in because she is in a situation where she must keep wearing masks. That mystery is revealed at the end.

But wait, the story of Jazmeen is not over with this book. If I ever write a sequel, maybe I will set her free then!

I am hoping to complete a psycho-thriller that I am writing now. That book is about 60-70 per cent complete, but I feel in order to do a really good job with it, I may need another 6-9 months to finish it. Oh, and if the response to PVG is good, writing a sequel sounds like a thrilling idea, too! I need plenty of readers and plenty of positive reviews and encouragement in order for that to happen – so fingers crossed!