Pidgin and all goth, Djinn goes where others daren’t

Deepa Annapara has tried to do something extremely difficult: write a story for grown-ups in the voice of a child. 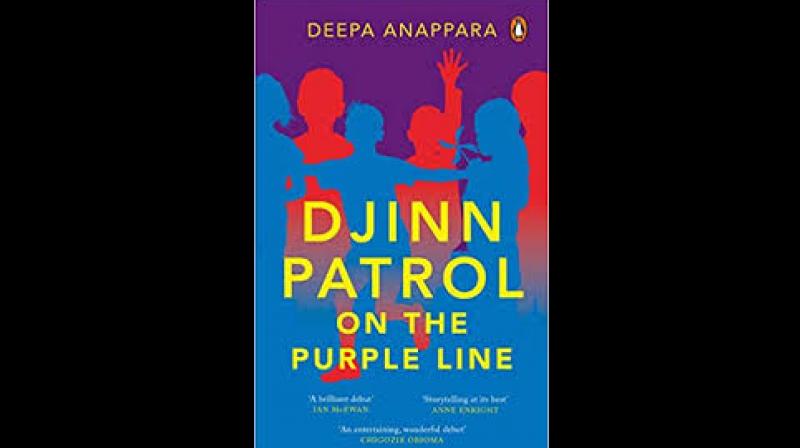 Jai, the nine-year-old protagonist and narrator, lives in a slum near the Purple Line of the metro, where a couple of hundred families dwell. Their water comes from one erratic tap that runs a few hours a day, and they store it in barrels on the street. They stand in long lines at the pay toilet every morning, where the custodian might lock up and disappear whenever he feels like it. There is no hot water for a bath, even in winter, and an oily smog hovers over the houses most of the time. Families manage with one room, which serves as kitchen and bedroom and parlour, and, if the budget runs to a TV set, a theatre as well. Jai's breakfast is typically a rusk and a glass of tea, on which he sustains himself until lunchtime at the government school, when he gets the free meal – terrible because officials grab most of the budget for it – that the school offers its students.

Life in the slum – the basti – is a matter of surviving from day to day.. The slum itself could be demolished anytime, and its residents live in fear of the arrival of government JCBs to destroy their houses. Order of some kind is imposed by Quarter, teenage son of a local politician of the saffron variety, who gets his name from his habit of consuming a quarter of liquor every morning.

Horror comes visiting the basti when Jai's classmate, Bahadur, who, because of his stammer, seems a little slower than others his age, disappears. At first it seems that he might have run away from home: his father is a violent alcoholic. But nearly a week on, the matter looks different. Filing an official complaint carries the risk of attracting the attention of officialdom, which might then demolish the basti, so when the police, in the form of a senior constable and his junior, condescend to visit the scene of the possible crime, the frantic mother of the missing boy offers the senior policeman a gold necklace as an incentive to carry out an “informal” investigation. The policeman makes a show of not wanting to take a “present” from a woman, but accepts it from the woman's husband.

Jai, a fan of Police Patrol, a TV show, recruits his reluctant friends Pari and Faiz to solve the mystery of Bahadur's disappearance. But Jai is more dreamer than detective, and they make little real progress with the “case”, despite Pari telling him to focus.

The horror deepens as more children disappear. Parents impose rules on their children: no going out alone after dark, no visits to “Bhoot Bazar” - ghost market – after dark, no going to school alone, and, for Jai's elder sister Runu, a talented runner, no practice. But the rules can't be enforced with any rigour, not by mothers – including Jai's – who work at the homes of the well-off, in “hi-fi” flats across the garbage dump, and often have to keep late hours to keep their employers happy. Faiz takes to wearing a tabeez to keep the djinns away, and Jai, too, feels the fear.

And then there is the perpetual uncertainty about when the slum will be demolished. Jai's mother Madhu keeps everything she thinks she can't do without, including her daughter's certificate for proficiency at sports, all rolled up in an old bedsheet so that when they do come, she can flee the JCBs at short notice.

After a few more disappearances, Hindu leaders of the local political party – including Quarter's father – gang up with a godman and hold the Muslims guilty. They put pressure on the police do something, and the police respond by arresting Faiz's brother and a gentle Muslim who runs a TV repair shop, and was not only kind to Bahadur but also figured out what he was good at.

The disappearance of two Muslim children, a brother and sister, does little to ease the suspicion. For Jai, it all comes to a head when Runu goes missing, and he blames himself for her disappearance. Madhu continues to keep everything precious packed for flight, including the certificate...

The police do nothing. It's the people of the basti who find a box full of small belongings of the missing children – ornaments, clothes, a cellphone – and take it to the police, forcing them to follow up, and find the real culprit. But there is no escape from fake news and rumour in the basti, with people living so close together, with so much contact with each other. The cloud of suspicion that descended on the basti when the Muslims were blamed for the disappearances lifts, but the divide it brought only deepens whens the police take their time over releasing the TV-repair-shop owner. Faiz and his family – besides others – leave  the basti for another with a larger Muslim population.

In the end, though, shope lives on, in the form of a single star that shines out to Jai through the night, that he tries to show his canine assistant, Samosa...

The story draws from the infamous Nithari case of the noughties, involving murdered slum children, corrupt police, and a well-to-do businessman and his servant. Annapara's portrayal of life in the slum is authentic and gritty. Each of the three sections of the book begins with a ghost story in the third person, about ghosts who come to your rescue when you need it, and when you have no one else. Indian society comes across as deeply callous, one in which even the gods have deserted the poor, whose only hope is in these ghosts, the djinns of the title.

Annapara has tried to do something extremely difficult: write a story for grown-ups in the voice of a child. She pulls it off with verve, except for a few spots where Jai seems far more than nine years old. Make no mistake, this is a good book, and a worthwhile read, but more ruthless editing would have made it outstanding.

I feed Samosa a bit of the rusk Ma gave me for breakfast. It's a good thing he loves rusk and I hate it. Ma thinks Runu-didi and I sit at home all day, studying for our exams that will begin the day school reopens. But Didi leaves for training soon after she finishes her chores. We don't ask each other questions. We are good at keeping our secrets.

The TV-repair chacha steps out of his shop with two customers and sees us. 'You're playing here because you think Bahadur will come back to my shop first, haan?' he says. 'You're such good children.'

He asks us if we want tea, and we say no, but his words make us feel so bad, we call off our stake-out and go to the Shaitani Adda. We check for any clues the kidnapper or djinn might have left, but there's only the usual rubbish we see in every alley in our basti: toffee wrappers, chips packets, newspapers trodden into the ground by slippered feet, goat pellets, cow dung, a rat's tail left over from a bird's meal. The broken Goddess Saraswati is still looking stunned in the weeds.