Books   08 Jul 2018  Spiritualism, not religion, is the true path for salvation
Books

Spiritualism, not religion, is the true path for salvation

The author believes religion is a deal whereas spirituality is a journey. 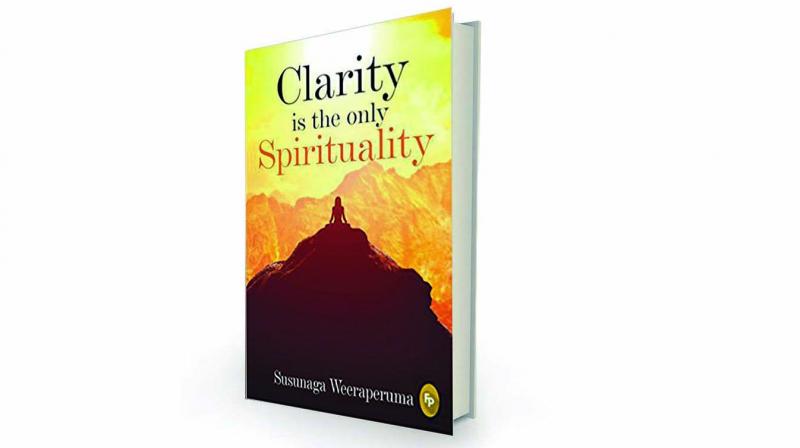 Clarity is the only spirituality by Susunaga Weeraperuma Fingerprint, Rs 599

In the last few decades, millions of people have given up on organised religion. Yet for many of these dropouts — from churches, mosques, synagogues, temples and so — spirituality is still a vital part of their lives. It may be no surprise that those who have started detesting organised religion have seen their appetite for spiritual values grow stronger.

Spirituality is primarily about tapping into the deeper wellsprings of our moral soil and the endless challenge of practicing, in our daily lives, the wisdom gleaned from them. Spirituality takes people to unknown and mysterious destinations in the quest for truth. The search often begins with some abstract question, such as: Who am I? What is the meaning of life? What is good?

Whereas most people accept readymade answers provided by scriptures and rabbis, spiritual seekers pursue their cravings for ultimate peace — the one from all the daily chaos that makes the mind go wayward and eventually clutter our clarity. The greatest impact of overemphasis on organised religion has been felt by spiritualism which is actually the soul of religion. Sadly over the years, ritualism has replaced spiritualism as a result of which all the great ethical and moral values that undergird spiritualism have grown weaker.

Susunaga Weeraperuma has answered several perplexing questions of spiritual wanderers in the book Clarity is the Only Spirituality. A harvest of essays, the book is a product of deep thinking. The messages this book gives all boil down to one lone mantra: “Think clearly, perceive clearly”. The theme of clarity is the leitmotif of the author’s entire thesis. One keeps coming back to it as it keeps rattling around the reader’s head throughout the book. I must admit though that some essays have feeble logic and are plain meditative ruminations — these are just ravings and persistent ramblings than astute writings of ideas. But few of them do provide profound insights and food for thought.

At many places, the book tends to wander and meander like an unruly mind but overall, it has an underlying tidal flow of rhetorical force that rolls the story along. The author has closely followed J. Krishnamurti and quotes him liberally and respectfully. Although it was Aristotle who first made a powerful case for self-awareness and self-knowledge, almost 2,000 years ago through his famous dictum, “to know thyself is the beginning of wisdom”, the author prefers to use Krishnamurti’s lessons for reinforcing his argument.

The author expounds a new concept, via negativa, to advise people to shun or purge thoughts and practices that clutter our minds and prevent it from attaining serenity. He drills his point with Rousseau’s famous opening sentence of The Social Contract, “Man is born free and everywhere he is in chains”. The book bristles with evocations of Rousseau’s own exposition of natural man being free and happy and living in the forest and how he went from this state of autonomy to the modern condition dominated by dependency, inequality, unhappiness and violence.

Weeraperuma has done a deep study of almost all faiths’ traditions. But he prefers not to comment on any individual religion because, as he says, silence should take precedence over speech. He advises that we must be generous at heart but miser in terms of comments or opinions on hypersensitive issues. He writes off religion as a form of tyranny and keeps talking about its pervasive negative influences. While the purpose of religion, says the author, is to unify humanity, the priests and rabbis have actually divided mankind into various factions and sowed seeds of discord.

The author believes religion is a deal whereas spirituality is a journey. Religion spells out a well-defined contract with predetermined goals. “God exists. He told us to behave in certain ways. If you obey God, you’ll be admitted to heaven. If you disobey him, you will burn in hell.” This concept makes the society define common norms and values for regulating human behaviour. People go to religious place in search of God but instead of finding God they find priests doling out catalogues of “dos” and “don’ts” as onerous as the tax codes.

We are told how to believe, what to think, as well as how we’re supposed to live. Then, there’s the debating, disagreement, and division that goes on between people, each group insisting that its beliefs are right, which by implication means that everyone else’s beliefs are wrong.

The author holds religion responsible for many of today’s social ills. He believes religion has hardly helped in chastening the animalistic nature of man. Religious knowledge, he says, can make one a great scholar or priest but it cannot elevate him to sainthood or enlightenment. He believes that spiritualism, not religion, is the true path for salvation. He invokes Jesus Christ: “And when you pray, do not be like the hypocrites, for they love to pray standing in the synagogues and on the street corners to be seen by others. Truly I tell you, they have received their reward in full.”

Clarity is the Only Spirituality is an unconventional book in many ways; it can be considered a motivational book or a self-help book. The entire book is divided into 18 chapters, each dealing with a vast canvas of human relations. The contents explored include personal life, friendship, importance of communication, religious tolerance, forgiveness, philanthropy, benefits of sexual abstinence, time management, importance of books and solitude, harmful effects of stress, chastity and contemplating death. Each essay is thematic which describes author’s experiences but the lack of rigour in analysis does not give them standalone strength. The essays should have been strung together to provide a mosaic of a coherent philosophy.

However, the author must be lauded for honesty and amazing candour. Written in a simple and lucid style, the book is neither preachy nor pushy but akin to the tone of a friend trying to explain things with a hope that you are able to see things from his perspective. He approaches controversial spiritual questions with a fresh lens that stimulates the psyche and nudges us to rethink and relearn.

In our daily life, sometimes we hit roadblocks and there are times when everything looks muddled up and nothing appears to make sense. During such phases, this book can serve as an ideal instruction manual to navigate the conundrum. This “promise” is liberally sprinkled in every essay and is patent in every discussion. The author makes us sit up and ponder when we encounter typically common and trite, but nevertheless highly important, concepts in some of the enlightening passages.

While the conclusions are author’s own personal responses to particular situations in his own life, they have a universal message and tone. There are certain things that can be generalised and applied to many of our own situations which have a near similar context. The author travelled a large part of the world before finally settling down in France and hence he draws heavily on his own culture. And he justifies it by arguing that French culture is similar to most other cultures and hence his own experiences should resonate with people across the world.

The final insight or understanding is that the real triumph lies in achieving clarity and awareness, be it by simply counting the beads of a rosary or through divine incantations. This is the truest texture of spirituality, which the faithful so often attribute to a deity.

Moin Qazi is a well-known banker, author and Islamic researcher. He can be reached at moinqazi123@gmail.com