Mystery minus a detective unravels dynamics of a society 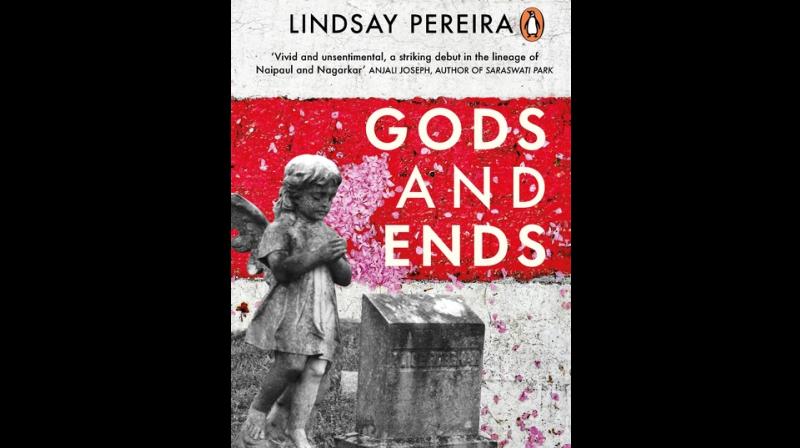 Cover of the book.

The book starts with a murder and ends with the reader finding out who did it, but it’s not a whodunit. It is, instead, the story of a prison and its prisoners and what happens when they leave it. It follows a structure of its own, weaving the stories of many people and their quirks into a novel that becomes a very unusual read.

The prison is an old and scabrous tenement, grandiosely named Obrigado Mansions, in a Mumbai suburb called Orlem. Its owner and occupants are mostly staunch Goan Catholics, some of whom even look down on similar Catholics from Mangalore. Its aging owner, the widowed Francisco Fernandez, who has inherited the building from his father, is tied down by age, habit, and inertia, and cares for nothing but the rent, due on the third of every month, payable in cash, since he distrusts banks. His middle-aged daughter-in-law, Dulcine, widowed a year after her marriage, lives with him for lack of any choice, and stashes the monthly collection of precious notes under a pile of clothes in a steel cupboard in her room.

The tenants, all with their own quirks, come to the place for its low rent, and, for the most part, stay on because there isn’t a cheaper place available, and because the place seems to drain them of hope. There’s Jude Sequiera, a factory worker — alcoholic, like most of the men in the building — who beats his wife Brigette and daughter when he has his thrice-a-week quota of Officers’ Choice whisky. His daughter, Philomena, cutely plump as a baby and obese after, body shamed and clumsy, who, from the age of fourteen, knows that she wants to marry another Orlem — but not Obrigado — inhabitant, Kenneth D’Mello.

There are the D’Souzas, Gilbert and Angelina, evangelists. Angelina has been drawn into her work by Gilbert, and continues with it knowing of his affairs and his hypocrisy. Gilbert, well into his fifties, beds Joeann Nunes, a relatively young widow, but the affair itself speaks of the same lack of choice that characterises the other inhabitants. And then there are the D’Costas, Joslyn and Mary, and their daughter, Michelle, who falls in love with and marries — much to the horror of her parents and neighbours — a Hindu boy, Ramesh.

Finally, there’s a haunted room in the building, whose human occupants never stay long, but whose ghost is Jesus. Its transient occupants include the D’Silvas, who have taken a room there because it’s cheap and people there are good Catholics. The initial welcome wears off very quickly because they already have a ticket out: they plan to stay in Obrigado for only as long as it takes their own place to be completed. Once the others come to know of their good fortune, their time is up. Others who occupy that room — besides the ghost, of course — include, in sequence, Ricardo, whose occupation no one knows, Lucian Gomes, a local thug, and Perpetual Lobo, a woman railway worker. And, outside Obrigado, in Orlem, are, besides the widow Joeann and the desirable Kenneth, a priest, Father Lawrence Gonsalves, and Kayden D’Mello, Kenneth’s son.

And in the midst of all this is the one Christmas party that residents have seen in the building. The owner couldn’t care less, and no one remembers how it came about, but someone thought it up and the money arrived in little dollops, and music and food and liquor, and, of course, the gossip and the talk that almost brought little frictions up to the surface.

Weaving all these diverse stories together is quite a task, but the author has some strengths. He has an ear for the language and intimacy with the attitudes of Goan Catholics, even the gossipy old ladies. Their food, their way of celebrating, their urgent desire to live in the present, all these come through very well indeed. So do other bits of their attitude: their tendency to look down upon sorpotel and music from Mangalore, for instance, and their attitude to followers of other faiths, which comes through when Michelle D’Costa marries her Ramesh.

But it’s the individual stories that constitute the strength of the book. They’re told honestly, without undue sentiment, without holding back, the voices strong and clear. Put together, the stories are uncompromising but never cynical. Two flaws weaken the telling, though. The first, and smaller flaw, is that the money seems to be from another age altogether. When could you rent any kind of place anywhere near Mumbai for Rs.125 a month, or get bhurjee-pav for five rupees?

The second is confusion in chronology, some of it arising from the list of major characters and their ages at the beginning of the book. Since the stories cover decades, there’s this question: at what point in time were these ages taken? Peter Vaz’s son Gavin, for instance, is listed as being eighteen, which seems a little unlikely since Gavin’s most prominent role in the story is his no-show at his father’s place with his fiancee.

Despite these, though, it’s an easy read. Pereira uses the language fluently and simply. His women are as convincing as his men, right down to Jude Sequeira’s widow making a saint out of her alcoholic wife-beating husband after his death.

It’s a promising first novel, and I shall look out for more from Pereira.

Shashi Warrier has written fairy tales, thrillers, a semi-fictional biography, satires, and a love story. Besides writing, he teaches strategic communication at a business school.