The writer sets on a journey to discover that the quaint seaside town of Tranquebar boasts of a colourful history. 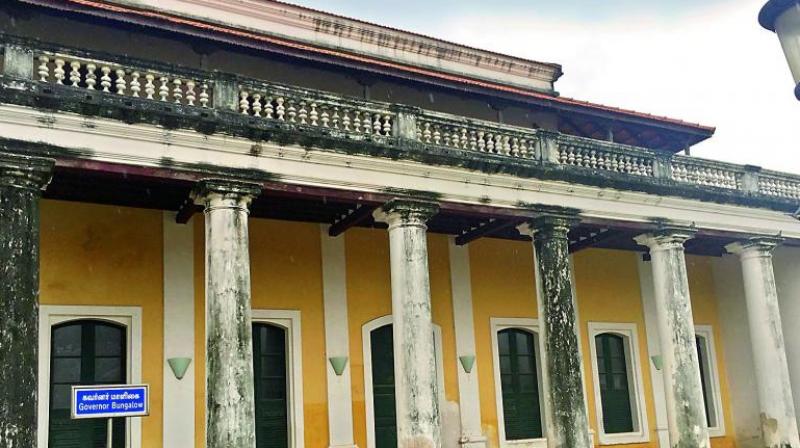 The New Jerusalem Church was built in 1718 by a Royal Danish missionary. Services are still held here on Sundays. When the tsunami of 2004 destroyed the building considerably, the church was restored at a cost of 7 million rupees.

It was a Danish settlement,” my friend said. “You mean Dutch,” I countered. Knowing how the Dutch had set up posts in Sri Lanka and India. “No, Danish,” she repeated.

We were discussing whether a visit to Tranquebar was worthwhile. Being close to Pondicherry, where we were holidaying, it seemed an easy day trip. And the name was piquantly enticing.

“I know,” my friend said, emphatically. “I have read up about it: it was the Danes who set up the township there...” “Let me look it up,” I said, convinced her memory had given her a slip.

“You won’t find it under Tranquebar,” she said, as I switched on the computer. “Search for it under its Tamil name, Tharangampadi. It means place of singing waves.”

What a tongue twister, I thought as I keyed the letters in. I will solve this mystery soon enough, I murmured. Whoever heard of the Danes settling in India. It must be the Dutch! 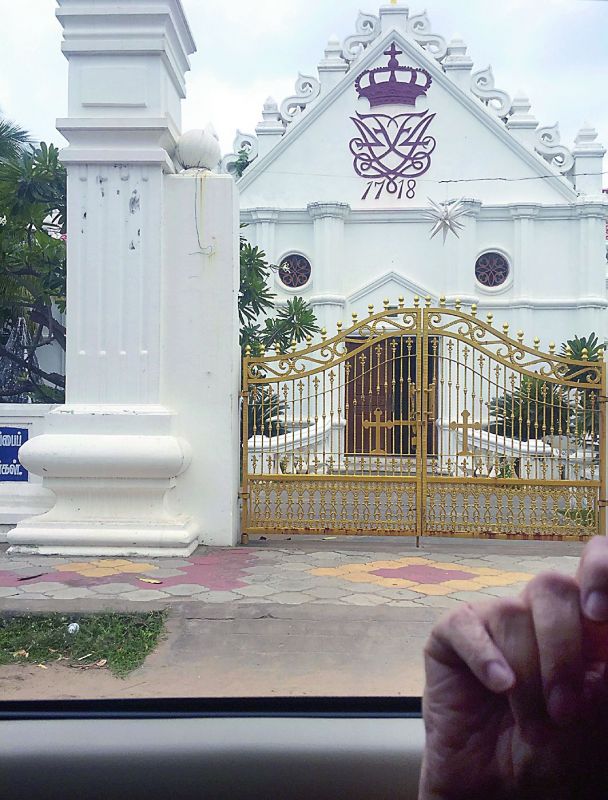 Houses have an old-world charm to them.

Of course, there was no Internet access that morning. So we made plans to drive down and find out for ourselves. My friend and I wore expressions that were ready to say, “I told you so!” to each other, as we set off in a hired car. The rest of the group was planning breakfast stops and coffee halts, but my mind was still grappling with the Danes versus Dutch issue. The road to Tranquebar is through villages and small towns, and finally reaches the highway to Kariakal, a seaside town known for its very unique Shani temple. We stopped for coffee, and breakfast, and finally the signposts started telling us we were nearing our destination.

There was, I hoped, enough to make the rather longish, four-hour ride worthwhile. A fort, a temple, a church and the sea, was what I had been led to expect. And proof of my conviction that the Dutch had created the settlement. The first glimpse of the town was indeed charming. A broad road lined by old houses that whisper of history, a very pretty red and white church with wrought iron gates and trees on either side of the road immediately made me feel I had slipped into another time. No honking car horns, no traffic at all. A white sedan stood in front of one of the buildings, and two cyclists swept past in a whir of wheels, their bells ringing as they turned the corner. The road ended in a sweep, and opened up into a clearing. I gasped at the sight of the fort. It was no crumbling old ruin, but a fort that gleamed, and looked like a confectioner’s creation, strawberry icing carefully piped over sponge to create a vision that was almost perfect in every detail. 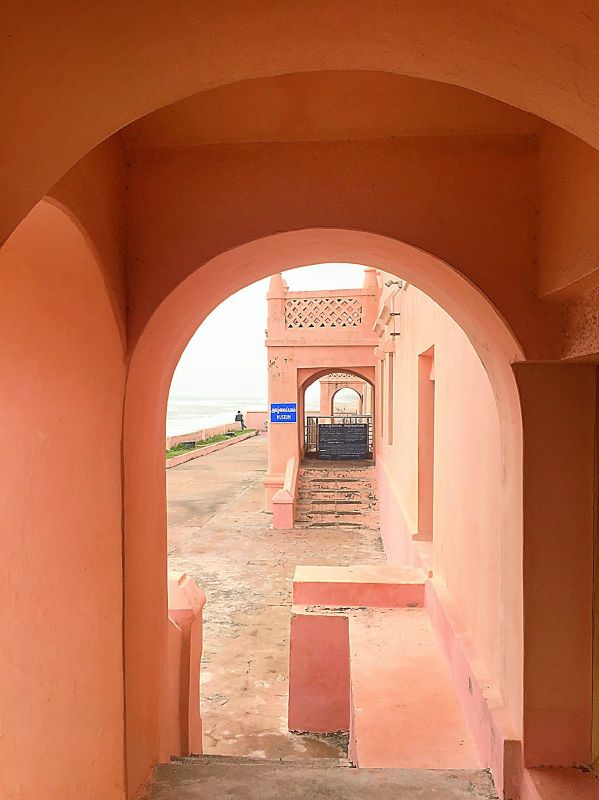 Through the arches along the ramparts of Danborg Fort.

Once upon a time the fort was surrounded by a moat, but that has since been filled with no sign remaining of it. I am quiet as we walk. The information board outside has stated in no uncertain terms that the fort was built by the Danes. They built the low-standing, graceful structure initially in 1620. But there were subsequent reconstructions. As it stands, Danborg Fort, to give it is name, is the second largest Danish fort. The largest one is in the town of Helsingør in Denmark, and inspired Shakespeare, who called it Elsinore, to build an entire play around it, named Hamlet!

We climb the steep walkway to the rampart walls that divide the fort from the sea below. Walking along the rampart, we enter a large hall that houses a museum. There are relics from what looks like kingdoms headed by local kings, the legend reads that they date back to the time of the Vijaynagar Empire and Thanjavur Nayak kingdom. A few pieces of porcelain, stones, sculpture, lamps and swords and daggers form the rest of the motley exhibits. Then there are some fragile terracotta objects and stucco figures carefully preserved, as well as some glass containers and Chinese tea jars. Possibly the most exciting exhibit is the skeleton of a whale that had the misfortune of landing up against the rocky shore.

But the real treasure lies in a smaller room. Hung on the walls is a detailed history of the fort… the coming of the Danes and the treaty signed with the kings who ruled over the region. It is a long and complicated story, the kind that would have inspired another Shakespearean play, but the mystery is solved. According to the tale told by the laminated posters, the Danes created an East India Company of their own in 1616, focusing on trade with India. Many misadventures later, they landed on the Indian mainland, and inked out a treaty with the ruler of the Tanjore kingdom, Raghunatha Nayak, who generously gave the Danes possession of the town of Tranquebar, and permission to trade in the kingdom in 1620. It was then that the fort was built and a governor was installed to rule ‘Danish India’. The treaty was renewed periodically and there is a record that in 1676, Shivaji, founder of the Maratha Empire, was the signatory on behalf of the Indians.

Then it is time to drive slowly past the pretty Church, which I discovered is The New Jerusalem Church, built in 1718 by a Royal Danish missionary. Services are still held here on Sundays. When the tsunami of 2004 destroyed the building considerably, the church was restored at a cost of 7 million rupees. Incidentally, my friend informed me that two Luthereans from Germany who came here in the early 18th century translated the Old and New Testaments into Tamil, imported a printing press, and printed the New Testament in Tamil, starting the practice of services in Tamil to reach out to locals.

Lunch done with, the rain warns us of the long road back, and dissuades us from checking out other parts of the town. As we start back, I get more snatches of history. The Danes sold Tranquebar to the British in 1845, and it continued to be a busy port till a railway station was built in Nagipattinam. It then lapsed back into a sleepy village town, with only a few remarkable buildings that bore witness to its amazing history.

As we drive back, I carry Tranquebar with me. Someday, I tell myself, it would be lovely to come back, and spend a quiet week here, and perhaps wander the streets under the swaying tress and walk along the sea in the early mornings. Perhaps I may find another bit of myself that living in the city has robbed me of. For now, I content myself with turning around the images in my mind to press them into my memory.