Internet was cut off, the military moved in and Kashmir and its people disappeared from our lives – no contact with the outside world whatsoever. 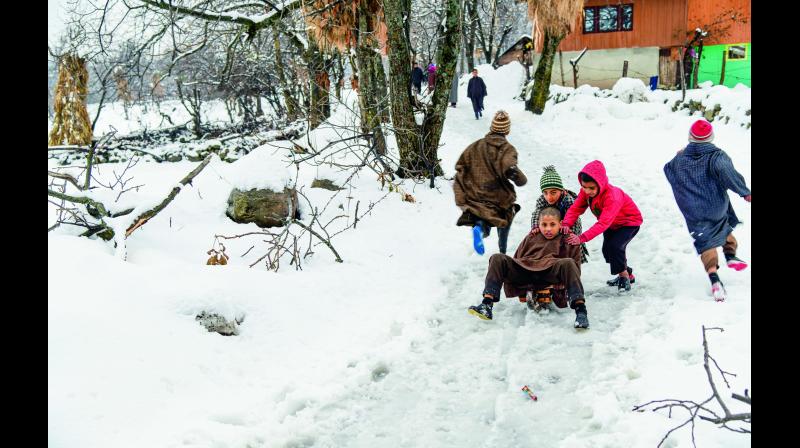 Children from Drang near Tanmarg on the foothills of Gulmarg enjoy a game on snow with their hand made sledge.

A journalist, who has travelled the globe basks in the scenic beauty of Kashmir . His project bismillah captures the unbridled joy in the eyes and faces of little children, amidst the harsh and cold environs of Kashmir.

Eleven. That’s the number of times I have gone back to Kashmir in the past 13 months. Initially, it was about love. Post August,  after Article 370 was introduced, it became a responsibility.

Internet was cut off, the military moved in and Kashmir and its people disappeared from our lives – no contact with the outside world whatsoever.

Tourism plummeted, the industry crashed, people lost their jobs and for month’s children and youngsters didn’t go to school, nor college, had no television or phone and no one earned a penny.

All of this was done for a better future. But what about the Kashmir of today? What happens to the people today?

I believe that the greatest tragedy of a place is when we forget them. Nothing destroys it like isolation. Abandonment, as a result of conflict and disaster — man made or natural, causes it’s decay.

This is when cultures, customs, tangible and intangible traditions and folklore are lost. How long can a tearing performance last in an empty theatre.

That is when Project Bismillah was born. Bismillah by definition means “In God’s name I begin”.

I heard so many people discuss Kashmir in the crimson carpeted drawing rooms — but how would those conversations really help people on the ground.

Project Bismillah is about photographing Kashmir — travelling to the far ends of the state — discovering villages and people off the map — ultimately cumulating into a body of work that intends to remind the world what unimaginable beauty runs through the veins of Kashmir. And the strength of their comebacks.

I just returned from there after documenting life during its most severe winter spell — they call it the Chilli Kalan — when temperatures dip to below minus 15 and places are cut off due to excessive snowfall. I thought I would find misery everywhere, but what I saw in return was disdain. An arrogance of survival. They cared for the loss, but it didn’t stop them from running their life. The energy was refreshing and so was their philosophy.

Team Bismillah travelled far and wide — from villages beyond Sopore to hamlets in Baramullah. We went to such remote villages to document life there that some even asked us “which country are you from”.

For the people of Kashmir, the bleeding has become normal. Splinters that rip through their soul are almost a daily phenomenon. Curfews, protests, shut downs and lock downs are all common. Hunger and lack of income are dear friends. But the tenacity of the people there are made of sterner stuff. They had seen all of this before. They knew misery loved company and hence they didn’t give a damn anymore.

On the ground, children played. Families stocked up for a long winter. And in midst of such hardship, when ration was measured, every home we passed by opened their doors and offered us food and drink. The warmth was more scorching than the summer sun.

Would this move help people in Kashmir?

I hope so as that is what it promised.