There is more to Corsica than what you saw in Tamasha. 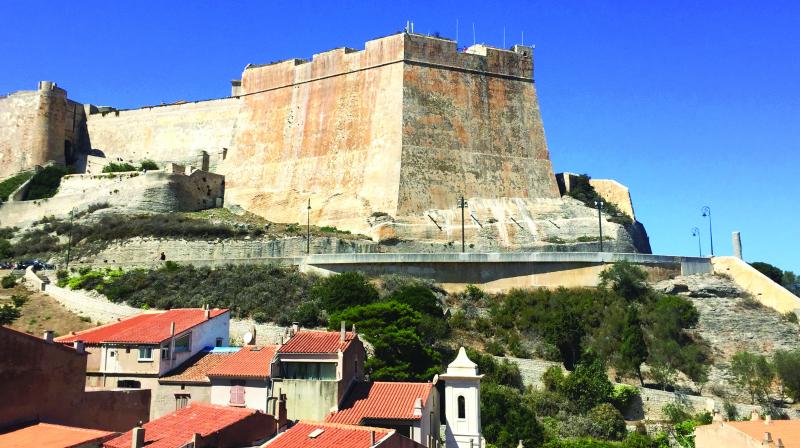 A view of the imposing fort wall from below

Suddenly, as it happens every time I visit a fort, I find I have stepped into the past. Only this time, along with the clashing of swords and booming of canons I can hear words in foreign tongues. And the sound of the sea, of course, which forms a backdrop to it all, as it crashes against the rocks and retreats with a swish only to come crashing again.

The Citadel, which I am exploring, is an old fortification set high above the Mediterranean Sea. It forms an eye-catching backdrop to the seaside town of Bonifacio, in the southern tip of Corsica.

While Bonifacio, which came into existence in the 9th century, is today a happy tourist haven, with shops and eateries and opportunities to play golf or go sailing, the Citadel is a formidable testimony to history and its ever-changing stories. 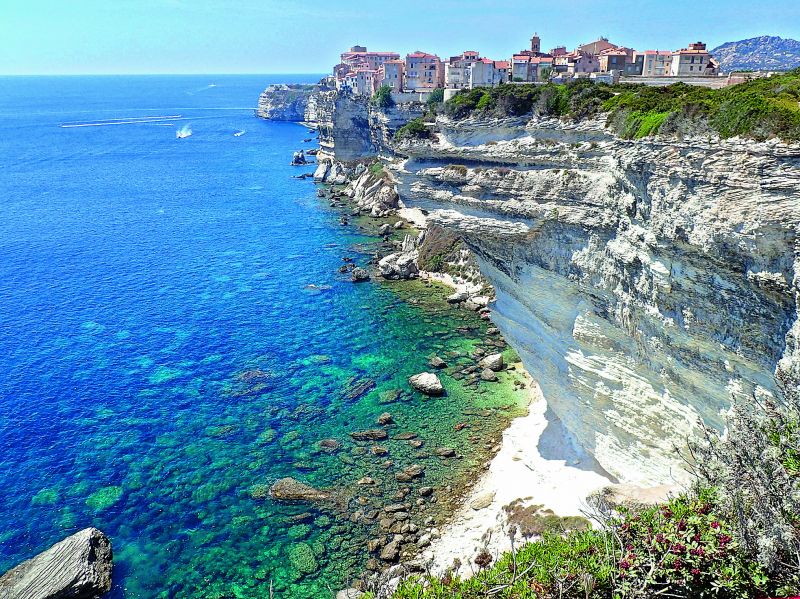 The Citadel can be reached by two routes. We have taken the easier one, as the sun is warm and the day is not long enough to take in the steep climb up the 70 metre slope. The drive up takes a few minutes, and is well worth the fee for using the road. The more adventurous, however, climb the  St Roch steps, but get some stunning views en route to make them forget the ache in their legs. I was told a tourist toy train also runs in summer and seats cost 5 euros each, but it was too early in the year yet. The early inhabitants used a drawbridge,  its mechanism is still in working condition. Operated by  weights and pulleys that were installed in 1598, the Porte de France stands testimony to man’s mechanical mind.

The Citadel is quite unlike Indian forts. Past and present mingle here, and as I walk along the cobbled streets, my heels ring out loud and clear, marking every step. Pretty shops line the streets, selling food, ice creams and the boutiques are enticingly decked out with colourful bric a brac and holiday wear. It is a feature that marks many of the historic villages set away from the towns and cities, and is perhaps a way of ensuring they remain alive and vibrant with tourist traffic. Of course, I steer carefully away from the shops; though there are some pretty finds to be discovered, the prices could be a real setback. Incidentally, the coral in these parts is a rich, ruby red. Dodging tourists crowding the shops, I try to reach the wall of the fort. The view beyond beckons. The sea is a silken blue cloth of gold shimmering in the sun. Far away, I can see the Italian coast. 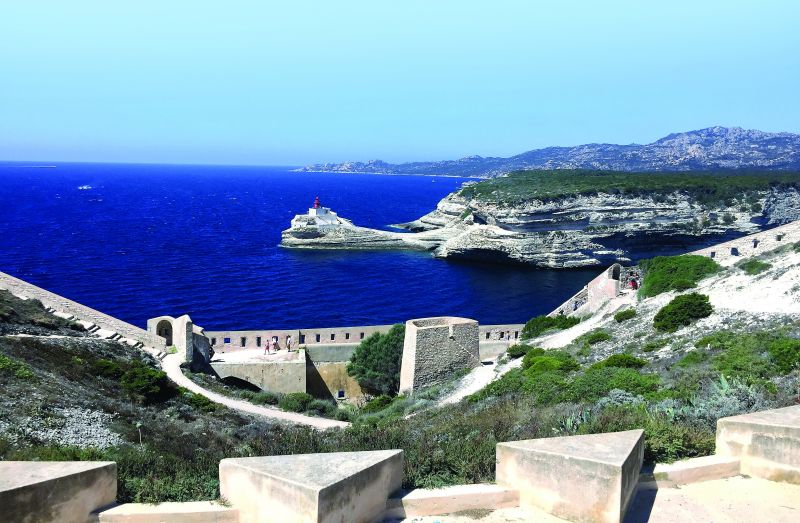 One of the view points. This was a lookout to watch for attackers

I also catch sight of the remnants of the old fortifications, the only  part that survived the destruction by French and Turks who joined hands in 1553 to wrest the town from its  inhabitants. Wandering into the tiny museum, the Memorial du Passe Bonifacien, I am struck by the reproduction of the prehistoric ‘Dame de Bonifacio’ skeleton and models illustrating some of the town’s history. I am rewarded for my curiosity by the view that the small garden beyond the museum offers.

Then I am at the head of the incredible line of King Aragon steps I have seen while cruising through the waters around the bay. As astounding as the carvings on the limestone cliffs that Nature has created, hollowing out entire caves that boats and small ships can pass in and out of; are these man-made steps along the fort wall, all the way from the top. Astonishing too, is the fact that these can be climbed still.

Once used to access the sweet water pond at the bottom, the steps must have been a treacherous trip for women carrying water up to the fort. Today I join the many brave-hearted as we test our legs on the steps, as the wind threatens to blow us off! A pretty boat, sails unfurled, stands watching us, making a perfect photo op. 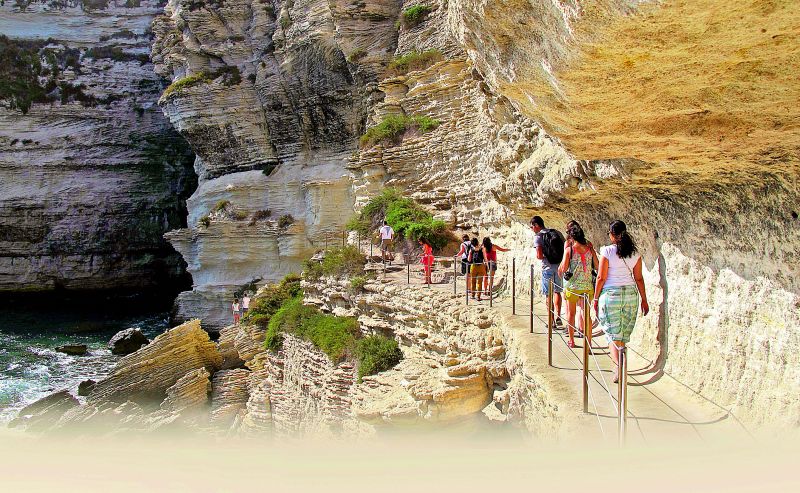 At the bottom of the steep Aragon steps

Passing the round, stone tower that has stood tall since the citadal was first built, we drive off to visit a cemetery.

Also worth the walk was the Rue des Deux Empereurs, the main road used by the Genoese when they occupied the fort. Tourists throng the street clicking pictures, and I realise that these houses had housed emperors. Charles V and Napolean I had occupied houses on this road, and though one cannot wander through them,  plaques outside are good photo souvenirs to carry back. 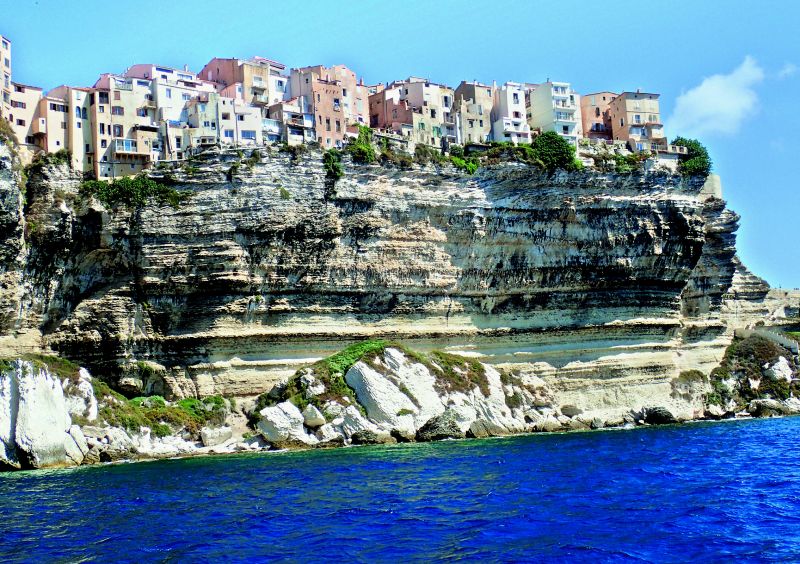 A view of the Citadel from the sea

I am informed by our guide, Henri de Rocca-Serra, who organises tours from India to his native Corsica that the arched alleys form aqueducts to collect rainwater, to supplement the water that had to be carried in from below.

We drive to a cemetery on the hill. The Corsicans celebrate death by building tombs that are like poems to the departed. High up above blue waters, under a blue sky, poppies splash their colour along the paths leading to the graves. There is a peace that reigns here, that refutes all manners of strife. Including that the business of daily living brings. 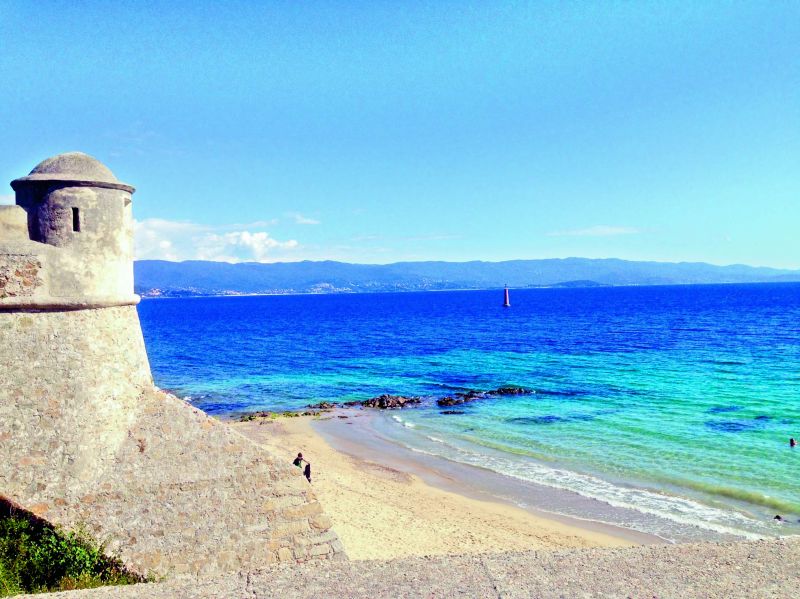 Then it is time to leave, and my body is telling me it is time for tea and a snack. Walking is hungry business.

I look back as we drive away from the new town, and far away the Citadel stands, almost suspended on a floating piece of limestone-encrusted earth, defying the sea that lays constant seige against it.