A strategic alignment of Russian and American foreign policy will bring solutions to problems that have been haunting world politics. 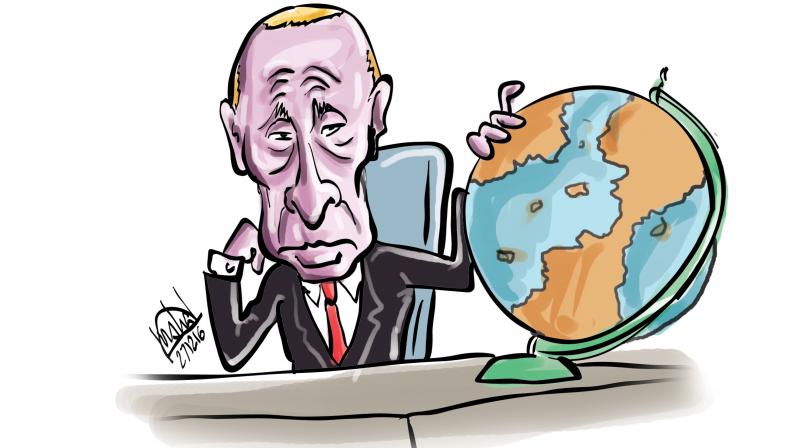 A robust Russia-Japan partnership can be a powerful counterweight to China in the Asia-Pacific.

No foreign personality has ever figured as prominently in a US Presidential campaign as Russian President Putin. He is portrayed as a malevolent figure who influenced recent Presidential elections, threatens the US with nuclear weapons, unleashes a bloodbath in Aleppo and is disrupting world order by redrawing national borders. As U.S. President-elect Trump insists that Russia can help the US in tackling conflicts in West Asia and other challenges, the anti-Russia rhetoric is becoming even shriller.

So, can a US-Russia thaw usher in some new geopolitical trends in 2017?

Trawling through his many pugnacious remarks and earthy tweets, we can discern major elements of President-elect Trump’s geopolitical perspectives:

The storm of outrage at these assertions reflects the apprehensions of the multiple constituencies which feel threatened by their implications. The Russia-West acrimony and the conflicts in West Asia provided the defence industry, export outlets to compensate for falling US defence budgets. Corporate and financial institutions have benefited from Chinese connections. Thus, collaboration with China benefits US business; hostility to Russia benefits its defence industry. In recent years, these commercial interests have trumped strategic thinking. 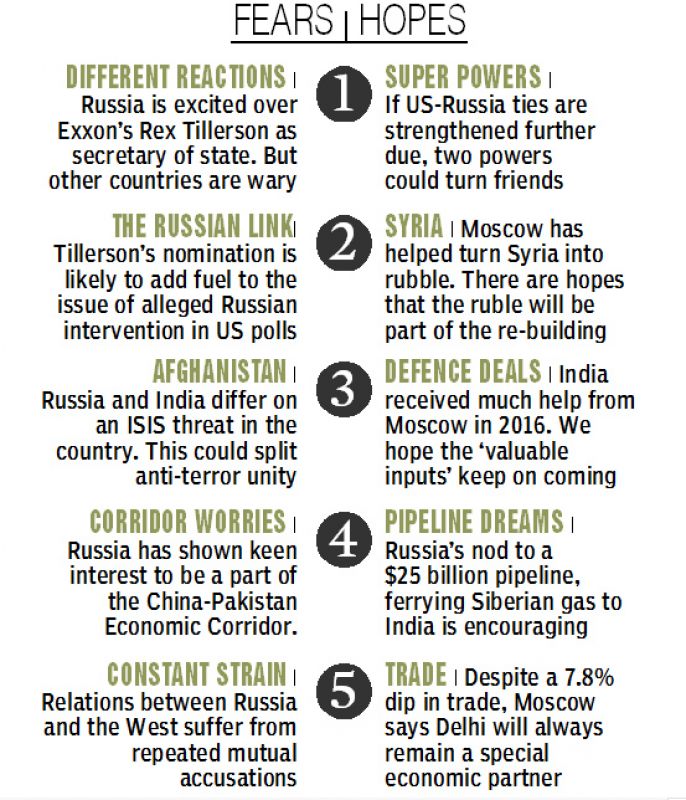 The immediate challenge comes from the crisis in Syria. If Trump translates into policy his view that fighting ISIS is more important than deposing Assad, and arrives at a common US-Russia approach, not only on Syria, it could have a dramatic impact, not only on Syria, but also on other conflicts in the region.

In the early-2000s, the EU sought (unsuccessfully) to emerge from the US Cold War umbrella. If a US-Russia thaw materialises, that opportunity arises again. The Ukrainian crisis however mars Russia-Europe relations. The “Normandy Four” of Germany, France, Russia and Ukraine has been negotiating its resolution. U.S. remains a phantom presence and Europeans (and Russians) have privately blamed US interference for continued impasse.

A US-Russia reset can also permit a Russia-Japan reconciliation – a process summarily arrested in 2014 by G7 sanctions against Russia; tentatively recommenced this year. A robust Russia-Japan partnership can be a powerful counterweight to China in the Asia-Pacific. It would be in US strategic interest, but does not require US political or economic investment, only its acquiescence.

The appointment of Exxon CEO Tillerson as Secretary of State draws attention to US interests in Russia’s hydrocarbons industry. Russia needs technology for exploitation of offshore Arctic resources. It is in obvious US strategic interest that its firms (and not those of China) expand their presence in Russia’s Arctic.

This then is the compelling strategic argument for the US to reverse its course of confrontation with Russia, which mainly benefits China and the countries whose interests clash with those of the US.  Putin’s recent moves indicate Russia is equally willing to make the required compromises. For all his alleged ignorance of foreign policy, President-elect Trump has grasped this reality. The question is whether his Administration can translate this into coherent policy. The first challenge is to align commercial interests with strategic interests. And address the widespread image of Russia as the “existential threat”. The contra-image —Fareed Zakaria’s recent description of China as a “relatively benign” power — is a strange description for a country that challenges US strategic interests, flaunts its military power, captures a US Navy drone in international waters and imposes strict limits on the nature and level of diplomatic engagement with the Dalai Lama or Taiwan.

A key determinant for success in this new strategic direction would be the President’s ability to carry his Administration with him.

In short, therefore, President Putin could be a trump card in President Trump’s effort to align US foreign policy with its strategic interests.

Such a realignment of US foreign policy would – depending on its course – largely accord with India’s strategic interest.

The author is former Ambassador to Russia.