India and China have been locked in a standoff on the Doklam plateau along the disputed Bhutan-China boundary. 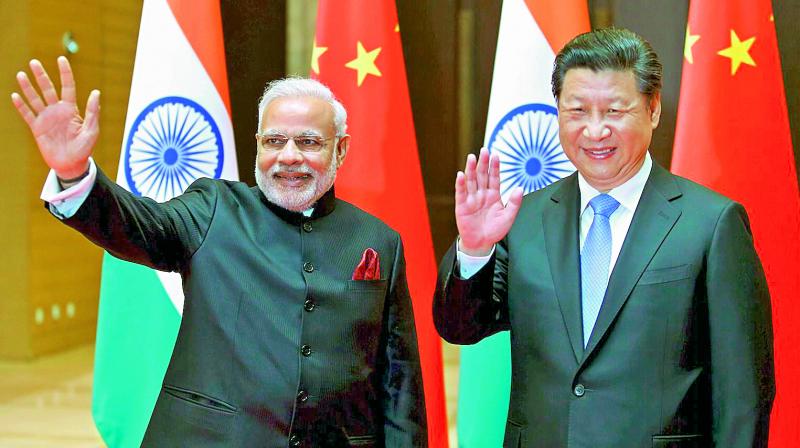 After taking over as the Prime Minister, Narendra Modi has strived to better ties with China. However, Beijing has been unrelenting on quite a few issues including Masood Azhar and India’s NSG bid.

A closer look at the current Sino-India standoff reveals the Chinese leadership’s belief that the current geopolitical scenario against the backdrop of ambivalent US posture and loss of heft owing to policy inertia vis-a-vis Asia-Pacific is an historic, strategic opportunity to seize geopolitical space by hardwiring and expanding its periphery through economic, political and military inducements.

It’s all about Asian power play
India and China have been locked in a standoff on the Doklam plateau along the disputed Bhutan-China boundary. This eyeball to eyeball confrontation is the direct result of China’s unilateral encroachment in a recognised disputed border area, in a blatant attempt to change the status quo with a small neighbour as also to wrest military advantage vis-a-vis India.

China’s actions violate past commitments that any issue regarding border alignments at the trijunction will be decided through consultations among the three parties, as well as its long-standing agreement with Bhutan to maintain the status quo on the boundary pending final settlement.

In terms of scale, duration and belligerence, this standoff is unlike any other in the past, when the two countries have walked back from periodic Chinese incursions and physical posturing in areas where there are differences on the Line of Actual Control. China this time appears to have taken premeditated step to stoke tensions and create a military face-off with India and more importantly to test the strength of India-Bhutan relations. It is also no coincidence that the incident was orchestrated close to Prime Minister Narendra Modi’s summit meeting with US President Donald Trump on June 26.

The manner in which Beijing has since raised the stakes and used all elements of the state apparatus, including official spokespersons backed by social media, points towards a coordinated campaign of coercion and intimidation to undermine India’s relations with Bhutan and its primacy in South Asia.

China’s actions fit into the familiar pattern of China’s expansionist territorial assertions, grey zone incursions and salami slicing tactics that we have witnessed, from the East China Sea to the South China Sea and now extending into the Indo-Pacific, since it began its overt pursuit of establishing hegemonic power nearly a decade ago. China’s current bellicose campaign is part of three-pronged strategy against India.

First, China is attempting to create proxies and foster instability along India’s strategic periphery through military posturing and economic inducement as also by questioning the validity of existing agreements. Second, leveraging its military asymmetry to brow beat India by highlighting the costs of military confrontation.

Third, incursions in Ladakh and even “settled” or undisputed areas like Sikkim constitute tactics of “subterranean coercion” to keep bilateral tensions alive till New Delhi succumbs to China’s demands.

What are broader Chinese strategic aims in raising tensions with India? A closer look at the Asian power play will highlight that Chinese leadership believes that the current geopolitical scenario against the backdrop of ambivalent US posture and loss of heft owing to policy inertia vis-a-vis Asia — Pacific is an historic strategic opportunity to seize geopolitical space by hardwiring and expanding its periphery through economic, political, and military inducements.

Seen in the above context, attempts by concert of maritime democracies signified by India — Japan and the US as later attempts to regain initiative in the maritime domain is seen by China as contesting its revitalization dreams.

An economically and militarily resurgent India fits into this puzzle as a lone strategic partner outside US-led alliance system, which can be subjected to coercion. By militarily embarrassing India, China not only establishes its credentials as a prima donna in South Asia but its power potential in South-East Asia. The ASEAN countries, as evidenced by the remarks of analysts and diplomats at the ‘Delhi Dialogue’, are already in thrall of Chinese power and psychological dominance.

They are far too dependent on China’s largesse in terms of investments and trade and thus tend to overlook China’s creeping maritime dominance of the South China Sea. A compromised India thus is the first and important step in seizing the strategic opportunity. For India, the standoff constitutes a fundamental shift in India’s security calculus as related to its strategic neighbourhood. Bhutan is part of the overall Chinese strategy aimed at making inroads into India’s strategic periphery to undermine India’s influence. Thus India-China relations are entering a period of heightened contention and confrontation where the stakes are indeed very high.

Two most important elements for India in the current scenario is the posture of Bhutan and standing firm on its principled stand despite growing Chinese coercion. Both constitute major security challenges.

India needs to reach out to Bhutanese leadership to ensure that they do not fall prey to Chinese overtures. The impact of shift in Bhutanese neutrality will be severe for India in terms of political and security ramifications more importantly strategic costs vis-a-vis boundary issue.

Second, having taken a decision to stand firm, India has no option but to brazen it out, and ensure a settlement on mutually acceptable terms without succumbing to Chinese brow-beating. Capitulation or weakness will not only undermine India’s regional stature as an emerging power but make China’s behaviour even more aggressive across Asia and firmly sow the seeds of a China-led neo-tributary system in the Asia-Pacific.

The stakes are indeed high in this India-China confrontation, for India as a regional power and a security stakeholder in Asia, but equally for a rules- based regional order that can effectively check China’s strategy of region-wide intimidation.

The outcome of the present impasse will have a bearing on whether Asia can evolve a stable and balanced security architecture that accommodates the interests of major and rising powers as well as smaller states, or we are headed towards a century of domination by an authoritarian hegemon.

(The writer is a senior fellow of Delhi Policy Group)

The South China Sea dispute
China claims most of the strategically important and mineral-rich South China sea, including waters close to the shores of the Philippines and other neighbours.

While China claims most of the sea, Taiwan, Malaysia, Vietnam, the Philippines and Brunei claim parts of the sea that commands strategic sealanes and has rich fishing grounds along with oil and gas deposits.

First overseas Military base
China has hinted that it was planning more global bases following the setting up of its logistics center in Djibouti, what the Horn of African country’s government calls a military facility that will be China’s first overseas.

China, the world’s second-largest economy, is seeking to expand its capacity to respond to growing threats to its interests abroad.

The Doklam dispute
The military standoff between India and China began on June 16 when Chinese troops attempted to lay a road in the Dokalam area. Doka La is the Indian name for the region which Bhutan recognises as Dokalam, while China claims it as part of its Donglang region.

India has been pitching for diplomatic solution to resolve the standoff but sought simultaneous withdrawal of troops of both the sides from the tri-junction. However, the Chinese media has been carrying a blistering campaign accusing India of trespassing into the Chinese territory.