The Attack: No one has a convincing answer

J&K CM Mehbooba Mufti took pride in the people of Kashmir having fully displayed the basic trait of Kashmiriyat after the incident. 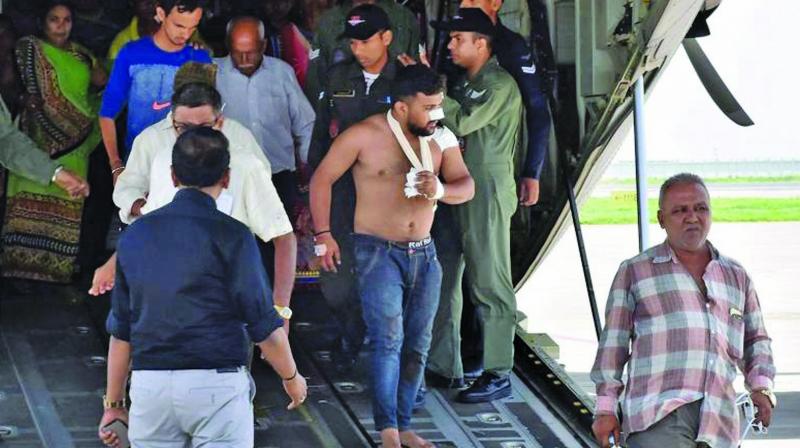 Amarnath pilgrims who were injured in the terror attack being brought by an IAF plane at the airport in Surat. (Photo: PTI)

The pilgrimage or those associated with it, particularly security forces, have been targeted by suspected militants or “unknown gunmen” in the past also. The worst happened in 1999 when more than 30 pilgrims and their local Muslim hosts died when an alleged suicide-squad targeted the tent city in Pahalgam and in the subsequent overreaction by the Indian police.

The last attack took place on June 21, 2006, when six Amarnath pilgrims were injured after an unidentified assailant tossed a hand grenade at a luxury coach, bringing them and others back to Srinagar from Baltal, the takeoff point of the shorter mountain track to the cave-shrine.

It was after a gap of more than a decade that seven devotees died and 19 others were wounded in the terror act at Botengo-Khanabal on July 10 evening.

The police still insists that the bus in which pilgrims were returning to Jammu after paying obeisance at Amarnath was caught in the crossfire between its men and the militants believed to be led by Lashkar-e-Tayabba (LeT). The driver of the bus, Salim Sheikh, and some passengers being driven home by him said it appeared to be a deliberate attack to cause maximum casualties among the pilgrims.

Intelligence officials say LeT commander Abu Ismail, a Pakistani national, was the mastermind behind the attack and that a clear directive has been issued to security forces by the home ministry to hunt him down. The LeT strongly denied its involvement and in its counter-charge accused the Indian intelligence agencies of orchestrating the attack to “defame the genuine freedom struggle of the Kashmiris”. Nevertheless, the entire security apparatus has been put on highest alert by the government.

Where did it go wrong then? This is the crucial question being asked by all. No one seems to ha-ve a convincing answer to offer.

All that the officials have to say is that the ill-fated bus was not part of any Amarnath pilgrim convoy. Such convoys are provided security cover right from Lakhanpur in Kathua district of Jammu region to the base-camps of Baltal and Pahalgam and back. The officials said that they were also investigating how the bus carrying Amarnath pilgrims was moving along the “most vulnerable” stretch of the Srinagar-Jammu highway after the sunset. No one seems to be interested in fixing the responsibility. The driver of the bus has been hailed and even rewarded for his “alert response” that “saved lives of many pilgrims”.

J&K CM Mehbooba Mufti took pride in the people of Kashmir having fully displayed the basic trait of Kashmiriyat after the incident. “When we came together, irrespective of our ideologies, ethnicity and regions to denounce it,” she said, adding that it gave a message to the world that Kashmiriyat, the ethno-national and social consciousness and cultural values of Kashmiri people, is alive.

Home minister Rajnath Singh gave a similar statement earlier. Separatist leader Mirwaiz Umar Farooq admits the incident went against the very grain of Kashmiri ethos but doesn’t really know who did it. “Only a probe by a credible agency can tell us who did it and none of the Indian agencies seem to be enjoying the trust of the people of Kashmir,” he said.

CPIM’s Muhammad Yusuf Tarigami makes a critical rather alarming observation. He says, “The people of Kashmir have no animosity with people of (the rest of) India but such barbaric acts only isolate them further”.

A member of the SASB told this newspaper, “the basic thing is yatra has to go on and it will go on”.