Dr Jagannath Panda
The author is a Fellow and Centre Coordinator for East Asia at the Institute for Defence Studies and Analyses, New Delhi

Expectations in the Korean corridors are high on the prospects and outcome of the forthcoming meeting between Donald Trump and Kim Jong-Un. 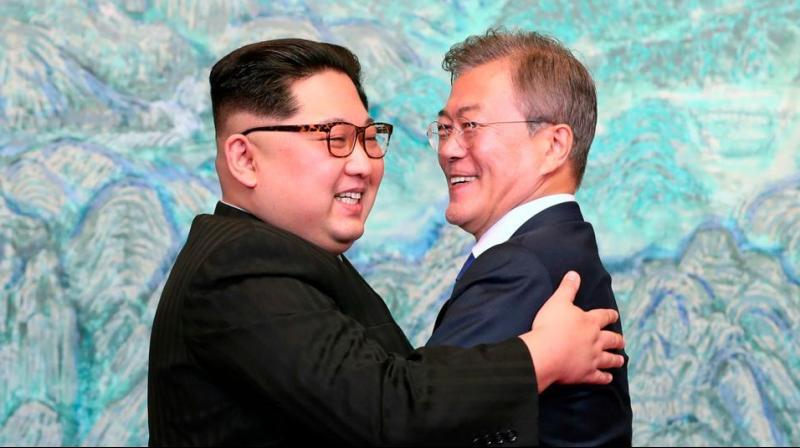 Politics in the Korean Peninsula is witnessing rapid changes, with both Koreas coming together after decades of mutual isolation and division. Pledging a ‘no more war’ scenario, the historic Panmunjom declaration, released at the third inter-Korean summit on April 27, promises a “new era” of national reconciliation, peace and prosperity. Expectations in the Korean corridors are high on the prospects and outcome of the forthcoming meeting between Donald Trump and Kim Jong-Un.

Welcoming the inter-Korean leadership meet between Kim Jong-un of North Korea and Moon Jae-in of South Korea, Beijing had stated that the summit was a “positive outcome” which would be beneficial for enhancing “reconciliation” and “cooperation” between the Koreas. Stating that North Korea and South Korea “belong to the same nation”, China added that it would like to play a “positive role” in the future dialogue, denuclearisation effort and the political settlement of the peninsula issue. It goes without mentioning that China’s role as a resident power in the region will be significant in shaping the future of the Korean Peninsula. Since the Korean War’s inception on June 25, 1950, China’s role has been the most important single factor not only in dividing the Koreas but also in leading the non-Western bloc in global affairs. Yet, it needs to be seen how far China has protected its own interests as a key power after the Panmunjom summit. The Panmunjom declaration mentions China’s role only in passing in a quad
rilateral format. The declaration gave special importance to the role of the US in a trilateral format with the Koreas apart from the quadrilateral format involving China with the Koreas. Does this imply that China’s role and influence in the peninsula has eroded in contrast to Trump’s new outreach to the Koreas?

Beijing has reason to worry since the credit for the third inter-Korean summit goes more either to Moon Jae-in’s “responsible” foreign policy or to Trump's smart outreach policy with the Koreas even though some might argue that Pyongyang’s consent to have an inter-Korean meet with Seoul is a result of American “maximum pressure” strategy. The forthcoming Trump-Kim meeting further indicates that US diplomacy is working. China’s primary worry concerns capricious American diplomacy, where Trump might like to have a bilateral understanding with Kim, taking South Korea into confidence. China fears that a trilateral understanding involving North Korea-South Korea-United States might be the order of the future in the Korean Peninsula. Nevertheless, it would be premature to state that the inter-Korean peace process is unfolding more with American assent than Chinese consent. The Koreas have taken China into some sort of confidence long before approaching the Trump administration for any prospects of peace and reconciliation. If the two “informal meetings” that were held between Kim Jong-un and Xi Jinping recently in Beijing and Dalian respectively have any clue to offer, China still maintains the edge as a resident power in the peninsula. It also acts silently to shape Korean Peninsula politics in times to come, especially with the cooperation of its traditional ally North Korea. China’s strategic understanding with North Korea may have weakened in recent years due to the international pressure over Pyongyang’s repeated missile and nuclear tests, but the Sino-North Korean political contacts and understanding are strong enough to shape the politics of the region in times to come. China continues to be North Korea's largest trading partner and would be the key economic partner for the return of normal economic conditions in North Korea with the possible removal of sanctions in the post-Panmunjom summit. Likewise, the prelude to the Panmunjom summit was the “four cardinal principles” — deterring war in the peninsula, its denuclearisation, promotion of peace and dialogue, and improvement of inter-Korean relations — that China and South Korea restated during Moon Jae-in's visit to China in December 2017. These figure highly in the Panmunjom declaration, reflecting the Chinese balancing approach towards the Koreas and the region itself.

Sino-South Korean relations must have gone through a low phase after the deployment of THAAD, but neither China nor South Korea has abandoned each other as partners in the region. Rather, as a constant historical power in the peninsula, China is remodelling its policies and postures subtly in the Korean corridors, with new content and conditions to its customary Korean Peni-nsula policy. China's customary or traditionalist policy towards the peninsula would be witnessing certain cha-nges in the post-Panmunjom summit with possibly a new revisionist policy.

The most important basis of Beijing’s traditionalist policy towards the Korean Peninsula is the China-North Korea Treaty of Friendship, which was signed on July 11, 1961. This treaty has been extended from time to time, extending to 2021. Articles II and VI of the treaty still guarantee China's role as a protector of North Korea, it also assures the role as a key “strategic ally” and, most importantly, as a peace-maker in the peninsula. North Korea would not really move ahead to forge any substantial understanding either with South Korea or with the US, virtually breaking away from this accord. Even though it appears from the Panmunjom declaration that China’s role has been marginalised in the current context, the fundamentals of the declaration endorse more the Chinese historical essence than the American essence in the Korean Peninsula.