Pak response was shorn of bluster

There was a precipitate, but not too insistent, mention of India in the discussions as an agent provocateur. 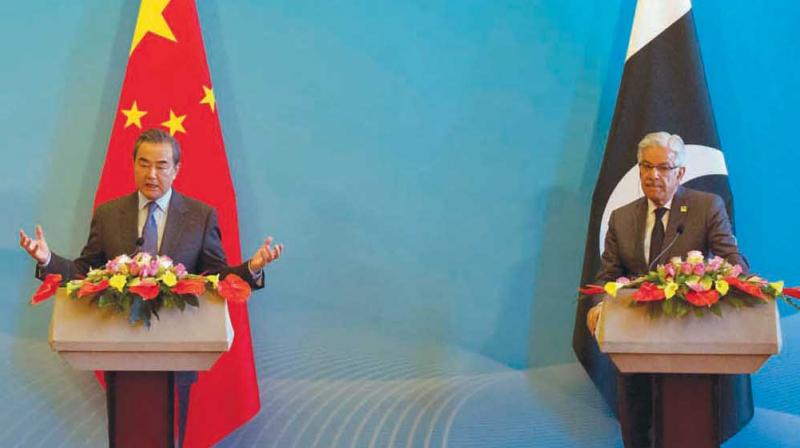 President Donald Trump’s tweet started the New Year in Pakistan on a bad note. The tweet, early on New Year’s day, took off from where Trump had left in August last year, while outlining his administration’s Afghan policy in Fort Myer, Arlington.

He had earlier talked about “[changing] the approach in how to deal with Pakistan”, which was sheltering organisations that targeted Americans ‘every single day’, despite the fact that the US was paying it “billions and billions of dollars”. He urged Pakistan “to demonstrate its commitment to civilization, order, and peace”.

In the tweet, he took off from there and censured Pakistan for harbouring terrorists the US was hunting in Afghanistan, and rued that Pakistan had treated American leaders as fools and given them nothing but ‘lie and deceit’ in return for $33 billion over 15 years!

By this time, reports of US withholding $255 million from the FMF (foreign military funding) account, meant for providing military training and equipment to Pakistan, were already doing the rounds. Days later, on January 4, the state-department spokesperson, Heather Nauert, said the US government was also suspending ‘additional’ security assistance to Pakistan because despite sustained high-level engagement, it was not acting against the Taliban and the Haqqani group and providing them sanctuary inside its territory.

It was not entirely unexpected. Many Pakistanis had seen it coming. But there were optimists who had thought Trump’s praise for Pakistani efforts to rescue Caitlin Coleman, an American, her Canadian husband, Joshua Boyle, and their children from Taliban captivity in October would restore the lost rhythm in US-Pak relations. That was not to be. Some speculated that the US was hurt when Pakistan did not cooperate in granting access to the suspects apprehended after the rescue.

There was a precipitate, but not too insistent, mention of India in the discussions as an agent provocateur working the US continually up against Pakistan, and taking full advantage of the American dependence on India as a close partner to counter China in the emerging global strategic landscape.

The less informed and highly incendiary elements took to the streets under the banner of Difa-e-Council Pakistan, a conglomerate of right-wing religious groups allegedly herded together by the military years ago in a bid to mainstream them politically. They shouted anti-US and anti-Trump slogans and held placards calling Trump “a foolish old man” who did not know “how to deal with the world”.

Others held that Trump was left with little choice, because the previous Obama administration had already defined the US approach towards Pakistan. For two consecutive years, it had withheld part of the coalition-support-fund (CSF)-- $300 million in 2015 and $350 million in 2016, refusing to certify Pakistan’s action against the Haqqanis. This year too, $400 million is likely to be withheld by the Trump administration.

The state department spokesperson, nevertheless, clarified that the suspension was reversible, subject to Pakistan’s behaviour. Nauert’s warning that there would be additional suspension only means that the administration is determined to use  military aid as a lever to pressurise Pakistan to take decisive action against the Taliban. There are still many optimists in Pakistan who hope that it would find a way of obliging the US by fulfilling its immediate demands and the relationship would swerve back to business as usual; after all the US has to work with Pakistan, if it was serious about fixing Afghanistan!

Interestingly, commentators in most of the news channels as well as vernacular newspapers, who are otherwise known for their bluff and bluster, reacted to Trump’s threat with unusual calm and composure. This is not to deny that there was some visible defiance at various levels. The foreign minister of Pakistan, known for his unguarded overtures, did come out with counter-tweets challenging the figure of $33 billion.  There were others busy rehashing the oft-repeated point that Pakistan had lost more than 70,000 lives and over $120 billion fighting the ‘American’ war on terror. The US was wrongly scapegoating Pakistan for its failure in Afghanistan!

Officially, the US ambassador was summoned to express the government’s disappointment over the tweet. The Pak army spokesman said that the situation would not lead to any fight because “allies do not fight”; that Pakistan wanted to cooperate with the US but not at the cost of its prestige and national interest, and it was prepared to respond to any punitive action. After an emergency national security meet, comprising both civilian and military leadership, the media reported that there was a need for balanced reaction.

All in all, the response from the Pakistani side was quite measured smacking of confidence that they could still turn the tide in their favour. After all, one has seen in the past how Musharraf, the dictator, kept the Americans happy with his gifts of prize Al Qaeda fugitives, every time a US heavyweight descended on the Pakistani capital! There is a hope that the khakis can pull several such high-value rabbits out of their hats in the coming days to calm American nerves.

What was surprising in the whole drama was the near absence of mention of China as a substitute for the US, despite the fact that the Chinese foreign ministry spokesperson lost no time in acknowledging Pakistani contribution to war on terror. One commentator in a TV show admitted that China was an all-weather friend but it could not replace the US. Indeed, Pakistan is so deep in the Chinese embrace at the moment, post CPEC, that it cannot be pushed any further.

There were various analysts who argued that hardening of US stance and its possible withdrawal from the Afghanistan-Pakistan theatre would only make it easier for China to step in and fill the void. The fact remains, however, that China already has a deep defence and security engagement with Pakistan, which is deepening further both because of ongoing CPEC- implementation on the ground, and the unreasoned fear that India is sabotaging this grand Chinese project.

While relationship with China does provide some sense of relief in the event of disruption of its years-long ‘alliance’ with the US, realists in Islamabad know that compared to American grant-cum-reimbursement of about $33billion, during the last 15 years (85 per cent of which has already been disbursed), the Chinese grant was miniscule.

The Chinese loans to develop infrastructure, many analysts in Pakistan apprehend, may have long-term adverse consequence for  its economy. With or without US, Pakistan’s dependence on China will continue to deepen and so will its strategic alignment.

In this context, it can be said in defence of Trump that his option of threat is perhaps the last arrow in his quiver. It may achieve what years of US inducements and persuasions did not. If it does not, with American patience running thin, all bets are off for Pakistan.