The Ministry of External Affairs said Pakistan disregarded the cultural and religious sensibilities of Jadhav’s family. 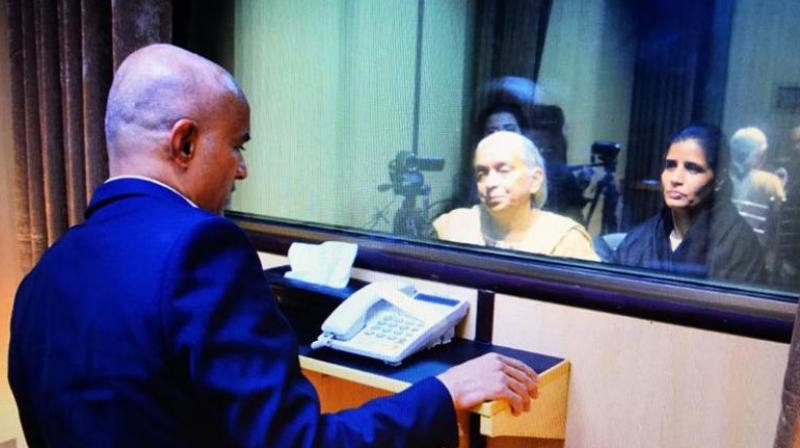 A top aide of Lashkar-e-Taiba (LeT) chief Hafiz Saeed has claimed that Pakistan’s intelligence agency ISI had stage-managed every move during Kulbhushan Jadhav’s meeting with his mother and wife in Islamabad earlier this week. Addressing at a crowd in Rawalpindi, LeT founder Maulana Ameer revealed an ugly nexus between the ISI and the Pakistan government.

“ISI and Pakistan government humiliated Jadhav’s family during their visit to Islamabad. They also made Jadhav face his family across a glass wall,” said Ameer. “India had requested Pakistan to allow Jadhav’s mother and wife to meet him. Pakistan showed mercy and invited them. India thought that they would meet Jadhav face to face on a sofa but the ISI didn’t allow it,” added Ameer.

He also claimed the ISI had suspected that something was being hidden by Jadhav’s wife Chetnakul in her shoes and the authorities had made her remove it. She was also forced to change her clothes, remove her sindoor and mangalsutra and her hair pin. There was a glass screen between Jadhav and his family during the entire meeting and they spoke through an intercom device. Jadhav’s mother Avanti was also not allowed to speak in their mother tongue.

Earlier on Tuesday, the Ministry of External Affairs (MEA) said Pakistan disregarded the cultural and religious sensibilities of Jadhav’s family. Jadhav was arrested in Balochistan, Pakistan, over charges of alleged involvement in espionage and subversive activities for India’s intelligence agency – the Research and Analysis Wing (RAW).

India, however, maintains that Jadhav was former Indian Naval Officer and was kidnapped from Iran where he had business interests after retiring from the Indian Navy. On April 10, 2017, Jadhav was sentenced to death by a Field General Court Martial (FGCM) in Pakistan.

On May 18, 2017, the International Court of Justice (ICJ) stayed the hanging, after India approached it against the death sentence. India has appealed to the court to impose emergency measures for Jadhav’s execution to be suspended until the legal battle in Hague concludes, while also accusing Pakistan of violating the Vienna Convention by failing to provide him with consular access and for being in breach of international human rights law.

Pakistan has repeatedly rejected India’s plea for consular access to Jadhav at the ICJ, alleging he was not an ordinary person and had entered the country with an intent of spying and carrying out sabotage activities.