The move has raised concerns among environmentalists about its likely impact on the Himalayan region. 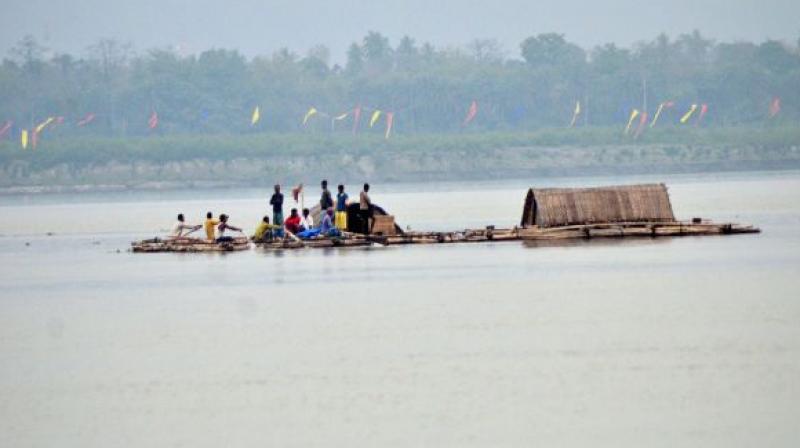 The Chinese government started building a tunnel in the centre of Yunnan province in August that will be more than 600-km long. (Photo: PTI/File)

Beijing: Chinese engineers are testing techniques that could be used to build a 1,000-km long tunnel, the world's longest, to carry water from Brahmaputra River in Tibet close to Arunachal Pradesh to the parched Xinjiang region, a media report said Monday.

The move, that is expected to "turn Xinjiang into California", has raised concerns among environmentalists about its likely impact on the Himalayan region, Hong Kong-based South China Morning Post reported.

The proposed tunnel, which would drop down from the world's highest plateau in multiple sections connected by waterfalls, would provide water in China's largest administrative division, comprising vast swathes of deserts and dry grasslands.

The water would be diverted from the Yarlung Tsangpo River in southern Tibet, which turns into the river Brahmaputra once it enters India, to the Taklamakan desert in Xinjiang.

India, a riparian state, has already flagged its concerns to Beijing about various dams being built by it on Brahmaputra river, which is known as Yarlung Tsangpo in China.

Beijing has been assuring India and Bangladesh, which is also a recipient of the waters from the river, that its dams were of the run of river projects and not designed to storing water.

Wang Wei, a researcher who helped draft the latest Tibet- Xinjiang water tunnel proposal, which was submitted to the central government in March, said more than 100 scientists formed different teams for the nationwide research effort. He was part of the team which was led by China's top tunnelling expert, Wang Mengshu.

The team, according to the report suggested draining the Brahmaputra at Sangri county in southern Tibet, close to Arunachal Pradesh.

"Sangri county featured a large, relatively flat valley that was ideal for the engineering project. An artificial island would be built in the middle of the river to create rapid turbulence, which could filter out sediment, and direct water to a well. The well could control the amount of water flowing into the tunnel," the report said.

The Chinese government started building a tunnel in the centre of Yunnan province in August that will be more than 600-km long.

Researchers said building the Yunnan tunnel would be a "rehearsal" of the new technology, engineering methods and equipment needed for the Tibet-Xinjiang tunnel, which would divert the Brahmaputra river to the Taklimakan Desert in Xinjiang, it said.

Chinese engineers say the Tibetan Plateau, often referred to as "the roof of the world", stops the monsoon from Indian Ocean reaching Xinjiang leaving the Gobi Desert in the north and the Taklimakan Desert in the south unsuitable for human settlement.

In recent decades, Chinese government departments, including the Ministry of Water Resources, have come up with engineering blueprints involving huge dams, pumps and tunnels, the report said.

The project's enormous cost, engineering challenges, possible environmental impact and the likelihood of protests by neighbouring countries have meant it has never left the drawing board.

But Zhang Chuanqing, a researcher at the Chinese Academy of Sciences' Institute of Rock and Soil Mechanics in Wuhan, Hubei province, said China was now taking a quiet, step-by- step approach to bring it to life.

"The water diversion project in central Yunnan is a demonstration project," said Zhang, who has played a key role in many major Chinese water tunnel projects, including the one in Yunnan.

"It is to show we have the brains, muscle and tools to build super-long tunnels in hazardous terrains, and the cost does not break the bank," he was quoted as saying by the Post.

The construction of the tunnel on the Yunnan-Guizhou Plateau, the country's second-highest, would make political leaders more confident about the Tibet-Xinjiang project and more likely to approve it, he said.